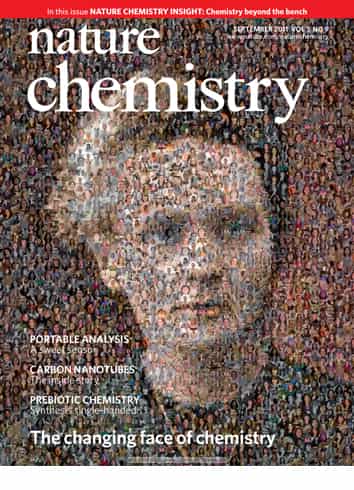 If you haven’t noticed yet, our September issue is a little bit different to all the other issues we’ve published so far. It contains what we call an ‘Insight’, which in this case is a collection of Commentary articles that look at broader issues in chemistry beyond the science itself. We’re doing this to mark the International Year of Chemistry – which happens to coincide with the 100th anniversary of Marie Curie being awarded the second of her Nobel Prizes (the chemistry one).

One of the Commentary articles was written by Michelle Francl – who is moonlighting from her usual job of writing Thesis articles for us. We asked Michelle to write about Marie Curie and how the representation of women in science has changed in the last 100 years. Even before the first draft of Michelle’s article landed in my inbox, she’d come up with a great idea for how to illustrate her article: a picture of Curie as a mosaic made up of photos of female scientists.

This was a fantastic idea, but getting permissions to use a large number of images filled me with dread. Nevertheless, Michelle sent along a mock up of the sort of picture she was suggesting by using images from Google — and it proved just what a great idea it was. Obviously we can’t just scrape the internet for images and then publish them; that would get us into a lot of trouble. We needed to get photos from scientists who wanted to be part of the mosaic and who would be willing to sign a form saying that we could use their photo.

Michelle was so enthusiastic about the mosaic from day one, that we decided we’d give it a go (and the mock up did look quite stunning). Putting down her pen and picking up her camera, Michelle turned photographer instead of writer and started snapping pictures (and made sure those forms were filled in). As the project gained momentum, members of the editorial team e-mailed some of their contacts to see if others wanted to take part. And we also decided that as well as using the image to illustrate Michelle’s article, it should feature on the cover of the journal.

Not only did we get lots of photos from people we contacted, but we got even more photos from others who had had the original e-mail forwarded on to them. I’m not exactly sure of the final count of different people we received photos from, mostly because some people sent more than one photo and some photos contained more than one person. What I can tell you is that we ended up with 270 photos. And then it was time to create the mosaic…

Michelle suggested we used MacOSaiX — and once I discovered you can have hexagonal tiles, I was sold. (There are plenty of other mosaic apps out there, including ones that are not just for Macs). So that we’d have more than just 270 photos and a better colour range, I created black and white versions of each photo and also sepia versions. For a bit of extra variation, I also cropped each original image more tightly to generate another set of photos. All told, that meant 1080 photos.

The mosaic template I chose was 45 × 50 tiles, so 2250 tiles in total. There is a higher-resolution version of the cover available here, and if you look closely, you will definitely see that some photos were used much more than others (I had no control over this…). And I also had no control over where photos were placed, so apologies go to anyone who might have ended up behind the Nature Chemistry logo or the red banner at the top of the cover.

Anyway, thanks to everyone who took part and agreed to be on the cover. I think it’s our best cover yet and will take some beating! If you contributed to the mosaic, we encourage you to leave your name and a comment below!