The birthplace of free radicals


Editor’s note: this is a guest blog post from Thomas Tidwell, who penned the Thesis article ($) that appears in the August 2013 issue of Nature Chemistry. 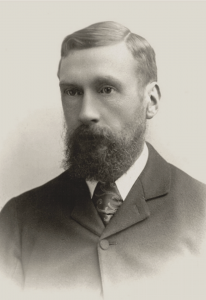 The town of Shrewsbury in Shopshire, England, has a rich scientific history. It was the birthplace of Charles Darwin (1809-1882), who was the son of the medical doctor Robert Darwin (1766-1848). A contemporary of the elder Darwin in Shrewsbury was the pharmacist Thomas Blunt, who corresponded with the Darwins, and assisted Robert in his work by supplying him with distilled water. Letters can be found online in the Darwin Correspondence Project (direct correspondence can be found here and here; other Darwin letters mentioning Blunt can be found here, here and here).

Blunt’s son, Thomas Porter Blunt, pursued a career in public health, and in the 1870s began a collaboration with another Shrewsbury resident, Arthur Downes, on the effects of sunlight on chemical substances, including chlorine and hydrogen peroxide. As recounted in the Nature Chemistry article, this led to a prescient proposal in 1879 that the absorption of light cleaved these molecules into pairs of radicals — an astonishing discovery that accurately anticipates the current understanding of these reactions. The significance of this discovery eluded contemporaries of Downes and Blunt, and did not elicit comment from leading scientists even though it was published in a leading journal. Jamieson in Australia did criticize some of the work on technical grounds, provoking a strong rebuttal from Downes and Blunt, but this did not prompt any further interest.

In 1903, the Nobel Prize in Physiology or Medicine was awarded to the Dane Niels Finsen for the study of the medical benefits of light, and Downes and Blunt were cited in the Nobel address. Downes was later knighted and both he and Blunt had distinguished careers in public health, but their proposal for the formation of free radicals was almost completely forgotten.

One of the best-remembered discoveries in the history of organic chemistry is the preparation in 1900 by Moses Gomberg of the triphenylmethyl radical — and its reversible dimerization — which was widely commemorated on its centennial in 2000. Interestingly, an incorrect symmetrical structure became accepted for the dimer, and was only corrected many years later: H. Lankamp, W. Th. Nauta, C. MacLean Tetrahedron Lett. 9, 249–254 (1968) and J. M. McBride Tetrahedron 30, 2009–2022 (1974). 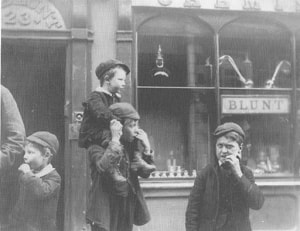 Photo courtesy of the Master and Fellows of St John’s College, Cambridge

The discovery made by Downes and Blunt preceded Gomberg’s work by two decades and the building which housed the Blunt pharmacy where some of the work was conducted still stands in Shrewsbury — as such, it should be recognized as the birthplace of the free radical chemistry. An 1889 photograph of the pharmacy (shown left), with the Blunt name displayed in the window, can be found here (scroll down) and today it is a listed building. The importance of free radical chemistry in human health is being increasingly recognized, and it is fitting that free radicals were first identified by public health workers.

Note: much more information about Thomas P. Blunt and his family can be found on this website.

Post updated on July 25th to include an additional photo; post updated August 5th to amend the caption to the photo of the Blunt pharmacy.