As pointed out yesterday in a blog post by Stephen Curry (and indeed in at least one previous blog post), some journals publish their citation distributions (this has also been blogged about by Steve Royle too – and probably by many others that I’m not aware of, I’m sure). I’ve been interested in doing this for Nature Chemistry for a while now, but have never quite found the time – but after a brief exchange on Twitter this afternoon, I figured I should run the numbers… (what better way to spend a Friday evening?!).

Well, no. If you do a Web of Science (All Databases) search for Nature Chemistry for 2012-2013, you find that we actually published 451 items in those 2 years. There were 239 research papers (we call them ‘Articles’), 16 review-type articles (long ones we call ‘Reviews’ and shorter ones we call ‘Perspectives’), as well as Editorials, Commentaries, Research Highlights, News & Views articles and other ‘front-half’ material – all adding up to a total of 451 articles. It is only the Articles, Reviews and Perspectives (255 items) that count as citable items, however. What does this mean? It means that although the bottom half of the impact factor equation described above only includes these article types, citations to any of the journal content (including News & Views, Editorials, Commentaries, etc.) get counted in the top-half of the equation.

If you look at those 451 items in Web of Science, in 2014 they received a total of 6,402 citations (that’s already 56 fewer than the 6,458 used in the JCR impact factor calculation – so those extra 56 must be being pulled in from some other database by JCR). Of those 6,402 citations that are in Web of Science, Articles received 4,852 citations, Reviews/Perspectives received 1,206 citations and all the other front-half articles garnered a total of 344 citations, so the distribution of citations between different content types breaks down like this: 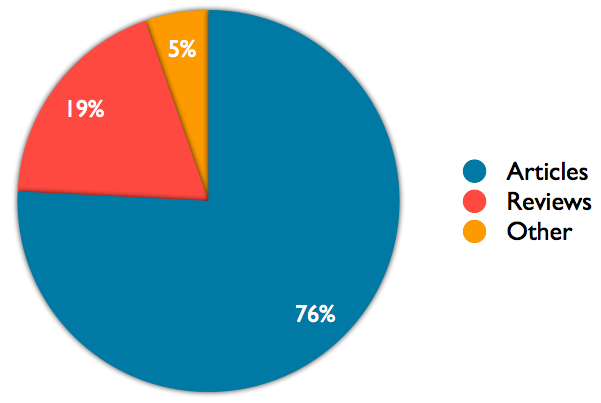 Now, just looking at the Articles and Reviews/Perspectives, we have a total of 255 items with 6,058 citations (we’re ignoring those 344 citations to other stuff) in 2014. That gives you an average of 23.8 citations (6,058 divided by 255) per Article/Review/Perspective. Of course, that is an average, and this is where citation distributions come in. If you list the articles in order from most cited to least cited and then plot article number versus citations, you get something that looks like this: 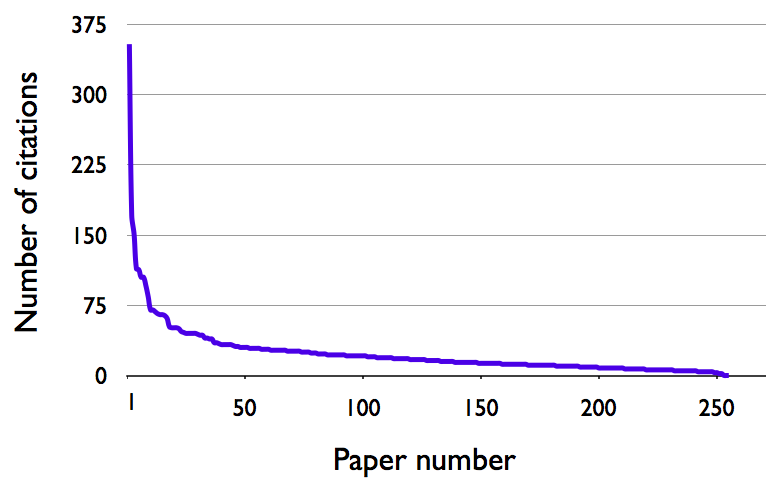 The most cited article is a Review (that was published in 2013) with 354 citations in 2014. Article number 2 on the list is a 2013 Perspective with 171 citations in 2014… and then we head to the end of the list where the 253rd, 254th and 255th articles all received 0 citations in 2014. That’s one way of plotting the data, but perhaps not the most useful. Another way to do it is shown below, whereby articles are put in bins defined by the number of citations received in 2014. 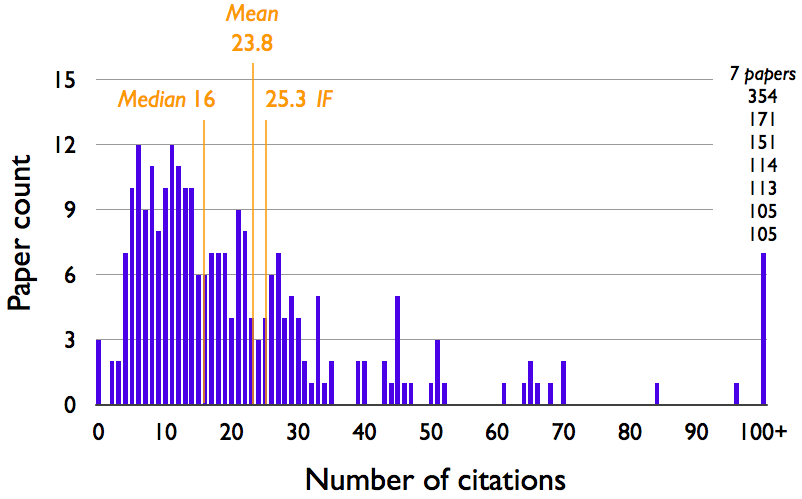 So that the graph is still meaningful, I lumped all of the 100+ citation papers into one bin at the end (a breakdown of what is included in there is shown on the graph). The official 2014 impact factor (25.3) is highlighted, along with the mean number of citations these article types actually received (23.8 – i.e., not inflated by the 344 citations included in the impact factor calculation that were actually cites to other content) as well as the median value too, which is 16. Only 29% of Articles/Reviews/Perspectives (that’s 73 of the 255) received more citations (26 or more) in 2014 than the calculated impact factor of the journal (25.3). The vast majority of articles received fewer citations (no more than 25) than the impact factor.

It’s well known that review-type articles are typically cited more than research papers (in chemistry at least and probably in other subjects too, I imagine) and so I repeated the analysis with just the research papers (the Articles) and left out the Reviews and Perspectives. The article number vs citations plot now looks like this: 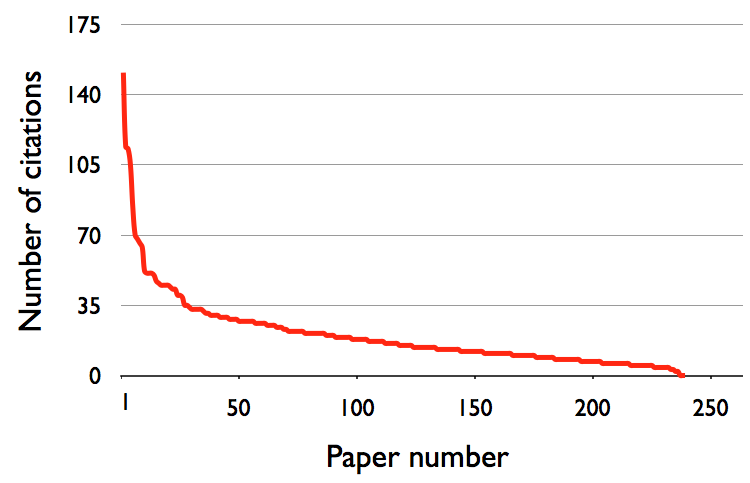 The shape looks quite similar to the graph further up this post, but note that the scale on the y-axis is quite different. The highest-cited research paper was cited 151 times in 2014, with the 2nd, 3rd, 4th and 5th-placed Articles receiving 114, 113, 105 and 84 citations, respectively. If we plot the citation distribution, we get the following: 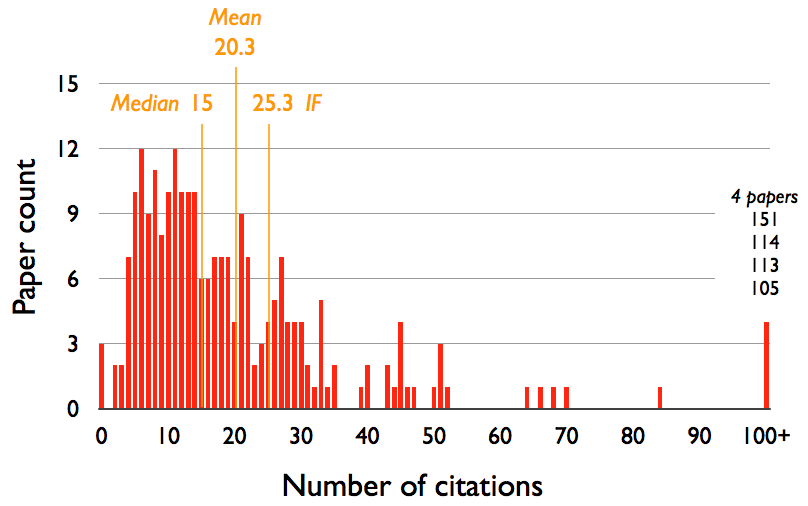 After removing the Reviews and Perspectives from the equation, the mean number of citations received by just the research papers is now 20.3 rather than 23.8 (a drop of 3.5) and the median has dropped from 16 to 15. Only 61 of the 239 Articles (that’s 26%) received more citations (26 or more) in 2014 than the calculated impact factor of the journal; roughly three-quarters of all research papers received fewer. If you consider 20.3 to be the pure Article ‘impact factor’, this is still a very skewed metric, however. Of the 239 Articles, 86 of them (36%) received 21 or more citations in 2014 and the rest were cited 20 times or fewer.

When the 2015 impact factors get released in 2016, we’ll run the numbers again and compare the data to what’s above to see if anything has changed all that much.