Thomas Hager – a chronicler of chemistry


The April issue of Nature Chemistry sees the publication of our first-ever interview in the journal. I was delighted when Thomas Hager, author of books such as ‘The Alchemy of Air‘ and ‘The Demon Under the Microscope‘ agreed to field some questions from me. For the full interview, you’ll need to be a subscriber, but here are some snippets from the piece. 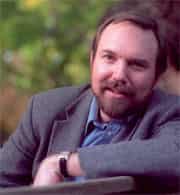 Is the chemistry theme in many of your books simply a by-product of your interest in food and medicine or is there an underlying fascination with chemistry, too?

I was not a chemistry fan. I majored in biology as an undergraduate, and then did my graduate work in medical microbiology, molecular biology and immunology. Along the way I took the standard slate of chemistry courses, but didn’t really take to them. Organic chemistry was torture. Then I took a class on molecular orbital theory that was close to incomprehensible — it might as well have been Sanskrit. I was clever enough to pass the course, but I learned nothing. I appreciated the field only later, while working with Linus Pauling on his biography. Interviewing Pauling was like taking the world’s best class on the development of twentieth-century chemistry. I’ve been hooked ever since.

In both The Demon Under The Microscope and The Alchemy of Air you don’t shy away from the fundamental chemistry that underpins the story in each case. Did this make it harder to write the books for a general audience?

The short answer is yes. The challenge comes from the fact that the typical non-specialist reader has close to zero chemical knowledge. The trick is to find a structure for the book that will introduce the reader first to a compelling story, then move them through the often-difficult science from square one, along with the story, carefully and progressively, not overwhelming the reader with too much at once, giving them time to digest the science by embedding it in a dramatic narrative with strong characters, challenges, mystery and so on.

You’ve written about sulfa drugs and ammonia synthesis — arguably two of the most significant breakthroughs of the twentieth century underpinned by chemistry. If you had to pick just one of these, which would you say had had the greatest impact on society, and why?

I am drawn to discoveries that have enormous direct impact. We increasingly live in a world that is as much technological as it is natural — often more so. We swim through technology all day, yet most people do not appreciate or understand the science that made it all possible, any more than we appreciate the atmosphere every time we take a breath. We take it for granted that we can flip a switch and make it as bright as day all night long, or get a shot for a disease that would have killed us (and most of our family, and maybe our town) a century ago, or fly through the air like gods. We accept these miracles as commonplace and have lost the exhilaration of that moment of first appearance, when these discoveries were seen for what they were: life-altering breakthroughs, watersheds in history. The Haber–Bosch method of nitrogen fixation, on the other hand, remains after 100 years the world’s major way of making nitrogen fertilizer; the products made by this method consume more than 1 per cent of all the energy on earth and feed around 40 per cent of the world’s population. I would argue that Haber–Bosch is, in terms of direct societal impact, the most important chemical discovery ever made.

Why is it important to tell story of the history of the science that is now part of our everyday lives?

Without understanding the history of science, it is difficult to fully understand the beneficial and not-so-beneficial roles it plays in modern life, the things it might do (and might not do) in the future, and why supporting it is so important. Science history tells scientists where they came from and who they are; and tells the general public important things about how the modern world came to be.

To find out more about why Hager became a writer, how he views Pauling’s legacy, and what projects are potentially in the works, the full interview can be found here ($).