The illustration in the holmium In Your Element article deserves a little explanation of its contents, hence this blog post, an extended figure caption for the article. 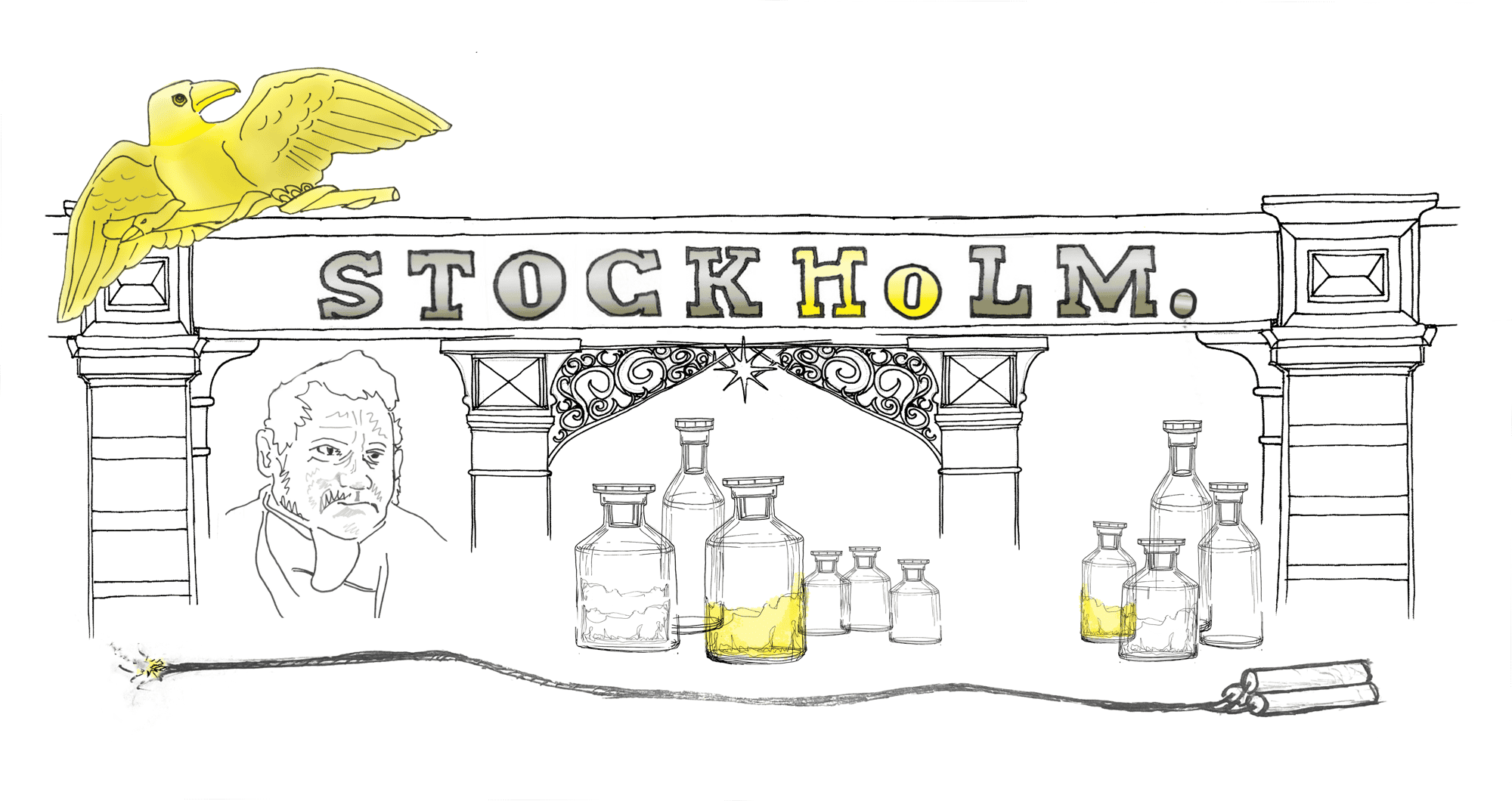 Per Teodor Cleve (1840-1905) suggested Stockholm as the namesake for his newly discovered element in 1879 because the Stockholm area “contains minerals rich in yttria” (ref. 1) — minerals containing yttria are a source of many rare earth elements, including holmium. Stockholm was also Cleve’s hometown, and as we noted in the IYE essay, already quite rich in chemistry history. Some other reasons that Cleve might have cited are the subjects of the illustration, with an emphasis on Stockholm-related element discoveries.

The raven refers to Korpen (the raven) pharmacy, located in the old town of Stockholm. This pharmacy was founded in 1674 by Jurgen Brandt, a German immigrant to Sweden. Coincidentally, Jurgen Brandt was the father of Georg Brandt (1694-1768), the first Swede to discover a chemical element (cobalt). The apothecary was at first called Örnen (the eagle) apothecary, but after being unsuccessful in its first location south of central Stockholm, the pharmacy was moved within a few years to the old town (Gamla stan); there it also received its present name, Korpen.

In 1768, Carl Wilhelm Scheele (1742-1786) moved to Stockholm and worked at Korpen for a time. Dissatisfied with his career progress in Stockholm, he moved to Uppsala, where he came in contact some of the more important chemists of the time… and where he discovered oxygen. Today, another pharmacy in Stockholm is named for Scheele.

Pharmacies continued to be prime places for Swedish chemists to work in the 19th century; at Stockholm’s Ugglan (the owl) pharmacy a young Carl Gustaf Mosander (1797-1858) was apprenticed. Mosander later went on to work at the Swedish Museum of Natural History in Stockholm. While at the museum he discovered of the elements lanthanum, terbium, and erbium. In the drawing, the façade with false columns and the word STOCKHoLM — with holmium’s symbol highlighted — are modelled after present-day front of Ugglan pharmacy (the actual sign reads “APOTEKET UGGLAN.”).

The portrait in the shop window is Jöns Jacob Berzelius (1779-1848), perhaps the most famous Swedish chemist of all time, whose work was vital in the discoveries of cerium, selenium, silicon, zirconium, and thorium. (Berzelius is not always credited was discovering zirconium: he was the first to obtain zirconium metal, but its existence had been suggested decades earlier by Martin Klaproth.) Berzelius and his students combined to contribute to the discoveries of 10 elements (ref. 2).

The fuse and dynamite bundle refers, of course, to the late 19th century industrial chemist, Alfred Nobel (1833-1896). Nobel patented dynamite in 1867, and had factories near Stockholm. Nobel’s namesake element, nobelium, was the most recent element discovery to be claimed by Stockholm scientists (ref. 3); though the name stuck, the discovery credit did not (ref. 4).

Brett F. Thornton is in the Department of Geological Sciences, and Bolin Centre for Climate Research, Stockholm University, 106 91 Stockholm, Sweden.

Emma S. Karlsson is in the Department of Analytical Chemistry and Environmental Science, and the Bolin Centre for Climate Research, Stockholm University, 106 91 Stockholm, Sweden.