Posted on behalf of Brett Thornton and Shawn Burdette. This blog post contains more information and references about the discovery of nobelium, and accompanies the nobelium In Your Element (IYE) article. Though it somewhat stands alone, it is best read after reading the IYE essay.

Up until element 100, the United States had a monopoly on the production of transuranic elements. That monopoly came to an end after element 100, where the American group at the University of California Berkeley barely managed to publish an account1 of creating element 100 before a group in Stockholm published a similar feat2. (Although it is worth noting that the Berkeley team had been delayed by Cold War secrecy). 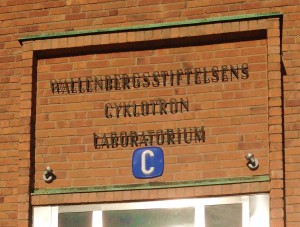 The sign over the entry to the Nobel Institute cyclotron building in Stockholm, now part of Stockholm University. Photo courtesy of Brett Thornton.

Elements 101-106 were all disputed discoveries, to greater and lesser degrees, between the American (Berkeley) and Soviet (Moscow, later Dubna) research teams3. Element 102, nobelium, is unique in that the dispute was tripartite — a Swedish–American (Argonne, not Berkeley)–British research team had the first claim to the element4,5. They named it too, giving nobelium the sometimes-declared-ignoble distinction of having been named before it was ‘properly’ discovered, and also not being named by its ‘true’ discoverers.

As discussed in the IYE article, element 102, nobelium, was particularly difficult to discover, partly owing to the surprising stability of No2+ in aqueous solutions6. Ytterbium, directly above element 102 on the periodic table, also has a prominent 2+ oxidation state, unusual for lanthanides (and actinides). However, in the 1950s, Glenn Seaborg’s ‘actinide hypothesis’, placing the actinides as a new group beneath the lanthanides, was still a relatively new idea7; a few years earlier, element 102 might have been guessed to lie below polonium.

And, at first, the 3+ oxidation state for later actinides was the only one forseen. In the actinide hypothesis paper7 of 1946 Seaborg wrote: ‘Deductions from work on the tracer scale with these isotopes lead to the conclusion that the III oxidation state is the most stable and by far the most important state for these elements in aqueous solution.‘ In the following decade, actinide separation methods were refined, and by 1956 a general, powerful method was established using cation exchange columns8. Consistently, the oxidation state of later actinides in aqueous solution was proving to be 3+. Of course, this method had not been tried on any undiscovered elements, and was only tested up to mendeleevium, element 101. The Stockholm group expected the method to work for element 102, but unbeknownst at the time, nobelium prefers the 2+ state in solution, so the method fails. The 244Cm + 65-100 MeV 13C reaction performed in Stockholm may have produced element 102, but their chemical separation method failed to isolate it. Initially, the Berkeley group was also using this separation method based on 3+ ions. And they were quite certain of their own early results: ‘the name nobelium for element 102 will undoubtedly have to be changed,‘ Seaborg commented9 in 1959. The Stockholm group’s rebuttal in 1959 did not at all satisfy the Berkeley group.

By the mid-1960s, the priority fight over the discovery of element 102 was clearly between the American (Berkeley) and Soviet (Dubna) groups. Following self-admittedly weak reports10 in 1958, the first strong Soviet claims to element 102 appeared11 in 1964, and were substantially strenghtened in 1966, and were in contrast to earlier Berkeley results. In response, the Berkeley group had performed comprehensive new experiments, produced and characterized many isotopes of element 102, including the successful production of 252No and 253No using the 244Cm + 62-74 MeV 13C reaction12. Their methods were now vastly improved from the late 1950s. Remarkably, this March 1967 paper from the Berkeley group makes no acknowledgement that they were using the same reaction, with similar products, as the Stockholm group had claimed to produce nobelium a decade earlier. (The Stockholm group had claimed 251No or 253No; both groups varied the 13C beam energies in numerous tests.) Of course, it was clear by now that the Stockholm group’s assignment of half-life and alpha-energies had been incorrect. It was also clear by 1967 that the Berkeley group’s early isotope and half-life assignments were incorrect as well. The Russian team did not shy away from pointing this out, later calling the Berkely explanations ‘backdated’, and published a flowchart to helpfully explain how their mid-1960s experiments had refuted all earlier Berkeley element-102 experiments, and subsequent Berkeley reports had merely confirmed the Dubna reports13.

Later, in September 1967, the Berkeley group further set out their claim for element 102’s discovery in the magazine Physics Today. On the Stockholm experiments, they wrote: ‘Our group made such an attempt soon thereafter (1958) at the Lawrence Radiation Laboratory. With great persistence we tried to reproduce the results of the Stockholm work […] we were unable to produce any nuclei of element 102 with the reported properties (8.5-MeV alpha particles and 10-min half-life). Under the superior conditions of these repeated experiments we estimated that we should have produced and observed at least 100 such nuclei in each experiment if the Nobel Institute findings were correct.‘14

Scientists tend to write little without meaning, and though we can’t know the intent for sure, the statement that the Berkeley group was ‘unable to produce any nuclei of element 102 with the reported properties (8.5-MeV alpha particles and 10-min half-life)’, very explicitly does not rule out that they had produced element 102 using the same 244Cm + 13C reaction as the Stockholm group. And by September 1967, they had published that very claim. Yet once again, the Berkeley group made no mention that their own experiments using the same reaction (and improved conditions) as the Stockholm group, had actually created element 102. Much of the 1967 Berkeley articles are dedicated to explaining how the old Berkeley results antedate any production of element 102 by the Soviet group in Dubna. It is curious, too, that the Berkeley group had backed off from renaming the element.

In a posthumous publication, Flerov (he died in 1990) wrote: ‘[T]he debate between the two groups in Stockholm and Berkeley has not been finished’13; Flerov seemed to imply that the Stockholm and early Berkeley experiments contained so many errors that their results could hardly ever be satisfactorily explained.