Letters from Lindau: Day 6, the finale!


Editor’s note: Anthea Blackburn is a graduate student based in the US who is attending the 63rd Lindau Meeting of Nobel Laureates (this year dedicated to chemistry) in Germany. Anthea is writing daily blog posts from the meeting for the Sceptical Chymist. Posts from days 5 and 6 are being posted a little late, sorry for the delay.

Well, the 63rd Lindau Meeting is officially over. And what a final day it was. 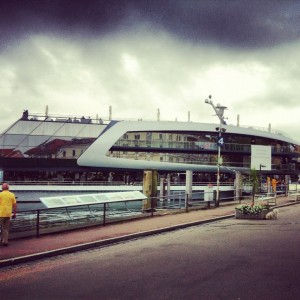 We spent the day on Mainau, an island owned by the Bernadotte Family (descendants of former princes of Sweden), who are also the instigators and organisers of the Lindau Meetings. It was fitting that we spent time on the island, considering the discussions on sustainable chemistry that we have had during the week, as it is maintained as a garden island and a model of excellent environmental practices.

We began the day (again, very early) on boat — dedicated to Countess Bernadotte — travelling from Lindau to Mainau Island. This ride gave us more chances to speak to the Laureates. One of the speakers earlier in the week likened the Laureates to dark matter in that you can’t actually see the Laureates themselves, just a halo of students around them, queuing for autographs and photos. As an observer from a higher deck of the boat, I can conclude that this analogy is definitely true!

We started off our final day of sessions with a panel discussion with José Ramos-Horta, Nobel Peace Prize in 1996 for his work to find a peaceful solution to the conflict in East Timor, and Gunnar Stålsett, Member of the Nobel Peace Prize Committee and Bishop Emeritus of Oslo. This was a particularly impassioned discussion on the challenges to peace and justice in the 21st century, with some emphasis on the role of science in these challenges, both in positive and negative ways. It is the responsibility of scientists to help bring society closer to peace and justice when it comes to the environment and health issues, but in order to do this, we need to speak the same language — across educational, social and generational divides. Ramos-Horta commented that many of the issues the world is facing today stem from science. Without the discovery and development of weapons and equipment of torture, many of the wars, past and present, would not have reached the level that they have.

This was a particularly sobering thought that, somewhat embarrassingly, had never before crossed my mind, but one that we as scientists need to be mindful of. Of course, the large majority of the research that we embark on does not stem from a desire to introduce more evil into the world, and we should continue to carry out research amorally and not hinder progress, but when considering the applications of our work, we should most definitely begin to reflect on the moral implications of our successes. This discussion was much different to those of the rest of the week, but I, personally, believe that it may have been one of the most humbling. We heard from two societal figures that have seen firsthand the issues of our time, not only about how we as a society can help to fight for equality, but how scientists can begin to play a role in this endeavour.

The final session of the meeting was a second panel discussion on green chemistry, between Steven Chu, Mario Molina, and Michael Braungart, Founder of the Environmental Protection Encouragement Agency, EPEA. This quickly became a somewhat heated debate, with much (I’m slightly ashamed to say, enjoyable) back and forth between the two Laureates and Braungart. Many good points were made between both sides of the discussion, albeit some a little strange — ‘effectiveness, instead of efficiency’? I’m not sure we should choose between the two, or if there is a difference. Regardless the overall theme was that there have often been unintended consequences from chemical advancements, which we need to look back at to see what went wrong and how we can fix them. Furthermore, there are a number of issues in the world that need to be addressed, and as time is of the essence, we need to address them simultaneously.

The meeting was concluded at the Mainau Palace, the place where the concept of the Lindau Meetings was turned into a reality. It was a somewhat somber ending to the occasion, but this is somewhat to be expected as the imminent end of such an incredible event came and went. Of course the extreme heat may have also had something to do with it…

So, the 63rd Lindau Nobel Laureates Meeting has unfortunately come to an end. I think that this may have been, hands down, one of the most educational, incredible, exciting, fulfilling, inspiring, words-can-barely-describe, insert-adjective-here, weeks of my life thus far. Not only was I able to learn about Nobel Prize-worthy research and how it came about, I was able to hear it from the people who carried out the research. I was able to meet new people and friends who share the same enthusiasm for science as myself, and who have the same interests in spreading this enthusiasm with those around us. I was able to take part in intelligent discussions regarding the issues of our generation of young scientists, and how we can go about resolving them for not only ourselves, but for future generations. And I was able to see the Nobel Laureates as real people, and not only the superstars they are — they fall asleep in lectures too and even play on their phones occasionally, they are 100 % in support of each other’s successes, they dislike having their photos taken as much as anyone else, they get nervous when presenting on stage and they’re more than happy to joke about it.

I gained a lot of advice from those who have made science their livelihoods, which I have mentioned throughout my musings over the past week, but I summarise them for you here:

– Never leave bench work to ensure your research remains exciting and fun;
– Take every opportunity to share your research, both with those in science and those who are not;
– Stand by the PIs in group photos. That way if the work wins a Nobel Prize you will remain in the award photo shown in Stockholm;
– Make sure the fonts on your presentation slides are big enough. But not too big;
– Steal the techniques of presenters you like;
– Sometimes, rather big things in chemistry begin in small corners;
– If you know the results of your research are important, but others disagree, don’t give up. If it’s as important as you believe, everyone else will begin to agree;
– Don’t telegraph that you’re going to tell a joke in a presentation, humour is tricky;
– Have interests outside the lab. They will help you to not only expand your horizons, but will engage other parts of your brain often not accessed in the lab; and
– A Nobel Prize should not be a life goal, but an unexpected surprise.

And my advice for you all? If you are given the opportunity to attend the Lindau Meetings, seize it and do all you can to get there, it will be one of the most inspiring, fulfilling and fun weeks you will have the honour of being a part of!