Editor’s note: Anthea Blackburn is a graduate student based in the US who is attending the 63rd Lindau Meeting of Nobel Laureates (this year dedicated to chemistry) in Germany. Anthea is writing daily blog posts from the meeting for the Sceptical Chymist.

What a day readers, what a day! I mentioned yesterday that I was particularly excited about the talks planned for today, and they certainly did not disappoint.

We started the morning off with the very animated Aaron Ciechanover, 2004 Nobel Prize in Chemistry, who while known for his work on ubiquitin-mediated protein degradation, spoke on the direction we, as young scientists, need to take in the development of new disease therapies. Drug discovery using high-throughput screening, while somewhat successful, is both cost- and time-intensive and Ciechanover said that we should instead focus on the ‘four Ps’ — participation (more knowledgeable patients), prediction (through the relative ease of mapping one’s genome), prevention (more and more often disease and drug side effects can be predicted) and personalization (disease and the related drugs are not one-size-fits-all). Of course, this approach is broader than simple target identification and validation — bioethics must be considered; that is, if we are able to predict the diseases we, and our children, could develop, should we take preventative action (and if so when)? As well as enabling new scientific methods and information, we also need to be aware of the sensitivity that the ability to obtain this data brings about.

Next up was Erwin Neher, 1991 Nobel Laureate in Physiology or Medicine, who was trained in physics, but spoke to us about chemistry(!) Specifically, he discussed the use of fluorescent labels in cells to measure the changes in the concentration of intracellular Ca2+ that cause the release of neurotransmitters in the presynaptic nerves of the brain. Furthermore, the specific amount of Ca2+ released in specific positions at each stage of neurotransmitter release can be studied using cage compounds containing a known amount of Ca2+ introduced uniformly into the cell. Upon photolysis of the cage, Ca2+ is introduced in a controlled fashion into the cell to invoke the transmitter release, and the effects studied through fluorescence. Chemistry can do everything!

Jean-Marie Lehn, 1987 Nobel Prize in Chemistry, further confirmed this belief about how awesome chemistry is, when he aptly stated that it is chemistry that allows matter to become complex by acting as a bridge between physics, the basic laws of the universe, and biology, the rules of life. More specifically, this bridge is self-organisation, for which Lehn is well-known. Self-organisation, that is, supramolecular chemistry, takes chemistry beyond the molecule and pre-organisation, and into the non-covalent world. This self-assembly can be taken a step further through the introduction of reversible bonds to give constitutional dynamic chemistry, which adds a further element of possible adaptation to the system, specifically the ability of the system to respond to changes in its environment through redistribution of its components. The work that he presented, and that which I have been following in the literature for some time now, never ceases to amaze this diehard supramolecular chemist. I was also fortunate enough to attend a discussion session later in the day with Lehn, where students were given the opportunity to ask questions about his talk and make the most of his vast experience in academia. Of course it was interesting to have the chance to ask him the questions that come to mind when reading about his research, and listen to his thoughts and philosophy on science as a whole, but perhaps it was even more entertaining to hear his answers to the questions others asked of him, by those chemists (supramolecular and otherwise) who were having problems in their research and thought he could help.

Perhaps one of the most engaging talks of the morning was that of Ada Yonath, 2009 Nobel Prize in Chemistry for the discovery of the structure of ribosomes. Coincidentally, she is the only female Laureate at the conference. Yonath’s slides contained virtually no information, but there was no need to look at the screen, because it was impossible to not watch her — except for when watching the amazing videos she presented showing the motion of DNA translation in the ribosome, and how its activity can be prevented in various ways using antibiotics. She also presented an interesting approach for preventing the emergence of drug-resistant bacteria through the development of antibiotics that target more than one of the functions of the ribosome, i.e., a synergetic approach. Yonath further won over the females present in the audience by showing that women can be successful in science, as she has convincingly proven.

The next talk by Rudolph Marcus, 1992 Nobel Laureate in Chemistry, is another Laureate who’s work I am familiar with based on the electron-transfer processes my own research aims to incorporate. This talk was perhaps one of the most personally useful so far, in terms of helping me to straighten out a concept in my own mind. As I am sure you are all aware, some of the literature discussing theory can be very…dense. I am in no way mathematically-minded, so to have the concepts spelled out with as few equations as possible was definitely beneficial, and it is nice to now properly understand electron transfer in molecular systems! 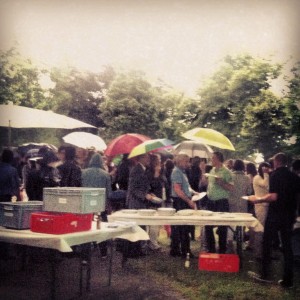 The talks were concluded by Richard Schrock and Bob Grubbs, 2005 Nobel Laureates in Chemistry for the development of catalysts for olefin metathesis. Schrock began the discussion with a background on the development of his molybdenum and tungsten catalysts, and the thought processes behind the development of each catalyst and their applications. Grubbs then continued with the use of his ruthenium-based catalysts in applications specifically related to green chemistry. These olefin metathesis processes have proved useful in green chemistry because the starting materials are often relatively simple and renewable (seed oils), the catalysts enable atom economy, decreased volumes of solvents and have high turnover numbers, and the products can be used to replace pollutants (new pheromone-based ‘pesticides’) or used in energy applications (living polymerization to make polymer photonic crystals). This was a particularly good duo of speakers, in that we were able to hear both the history of the work for which the Nobel Prize was awarded, as well as the applications it is now being used for, without all of the information being condensed into one presentation.

The day concluded with the annual ‘Grill and Chill’, where the meeting participants and the members of the Lindau community socialize over dinner, and provides us an opportunity to thank them for letting us invade their town for an entire week! The evening started off very pleasantly with warm weather, delicious German food and drinks and music, however as soon as the Lindau Mayor had welcomed us all and doomed the evening’s good weather, a storm arrived. I gained a lot of respect for those who had yet to eat, however, as they continued to line up outside for food, which was getting damper by the second — that’s dedication. Or the effects of hunger!