Seeing is believing: direct imaging of structural defects in a MOF

Structural defects in metal–organic frameworks (MOFs) play important roles in tailoring the properties of the MOFs to specific functions and applications, but determining the exact structures of these defects is challenging. Here, we use our novel low-dose, high-resolution transmission electron microscopy technique to probe defects in MOF UiO-66. We identify three types of defects and three-dimensionally reconstruct one of them with atomic precision. Our ability to engineer and identify structural defects that are catalytically active sites in this archetypal MOF enables us to study its structure-activity relationships in unprecedented detail.
Yu Han
Professor, KAUST
Follow
Like Liked by Michal Filus

Structural defects are known to exist in metal–organic frameworks (MOFs), and to affect the materials’ properties, but their exact structures have remained difficult to determine. Now, missing-linker and missing-cluster defects have been observed in a MOF using low-dose transmission electron microsc…

Metal-organic frameworks (MOFs) are crystalline, nanoporous, organic-inorganic hybrid materials that have been widely used in gas capture and storage, separation, sensing, and catalysis. The average periodic (crystallographic) structures of MOFs can be resolved by reciprocal-space diffraction-based methods. Probing local, non-periodic structural features, such as crystal surfaces and interfaces, guest molecules, and structural defects, in MOFs using direct, real-space imaging techniques is much more difficult. Because these local structures crucially influence a MOF’s properties and often dominate its performance in applications, resolving these local features would be advantageous.

High-resolution transmission electron microscopy (HRTEM) is commonly used to observe local structures in crystalline materials; however, it is conventionally considered impossible to observe MOFs with HRTEM because their structures are easily damaged by the electron beam. In fact, imaging of electron-beam-sensitive materials like MOFs is a long-standing challenge in HRTEM.

Recently, we offered a solution to this challenge. In 2017, we showed that the use of a direct-detection electron-counting camera enables HRTEM imaging of a MOF with an ultra-low electron dose (~4 electrons per spare angstrom) to capture its intrinsic crystalline structure before damage occurs;1 in 2018, we developed a suite of methods to increase the efficiency and accuracy of image acquisition and processing, advancing the use of HRTEM on electron-beam-sensitive crystalline materials, including MOFs, to a nearly routine process.2 Using this powerful technique, we have successfully imaged various local structures, including surface and interfacial structures, encapsulated guest molecules,3 and metal-cluster deformation, in a number of MOFs at atomic resolution.

Our current work in Nature Chemistry is an extension of these previous works, investigating important local structures that are peculiar to MOFs – “missing linker” and “missing cluster” defects – in a catalytic MOF, UiO-66.  Previous research has suggested that these structural defects in UiO-66 play crucial roles in catalysis, but the exact structures and spatial distribution of the defects remained ambiguous due to difficulties in characterization. Now, our unique imaging ability allows us to directly “see” these defects, thus providing direct evidence for their precise structures (see Figure 1 for the solved structure of a missing-linker defect) and distributions, and even their evolution during the growth of MOF crystals.

Figure 1. Three-dimensionally reconstructed electron potential map of the “missing linker” defect from three HRTEM images acquired along different incidences. Isosurfaces rendered at different thresholds are superimposed with the geometry-optimized structure model of the missing linker defect for comparison. Clearly, the envelope of the defective UiO-66 framework, which is composed of a Zr cluster, benzene-1,4-dicarboxylate linkers and defect-terminating formate groups, is identified at the threshold of 48.5% (a). The C atoms on carboxyl groups and the Zr atoms are precisely identified at the threshold of 56.0% (b) and 74.5% (c), respectively. The reconstruction result shows a defective, eight-connected local structure, clearly differing from the “perfect”, twelve-connected UiO-66 structure.

Our observations solve some long-standing puzzles about the defects in UiO-66: What are the exact structures of the missing-linker and missing-cluster defects? Do they exist randomly throughout the crystal or form locally ordered domains? Are there missing-linker defects and missing-cluster defects coexisting in the same crystal? Can defective structures transform or evolve into the perfect structure during crystallization?

In addition to answering these questions, we also designed experiments to validate the defect-terminating species identified by our HRTEM study and to correlate the catalytic property of UiO-66 with the observed defects. Check out our paper “Imaging defects and their evolution in a metal–organic framework at sub-unit-cell resolution” in Nature Chemistry for more details.

It would not have been possible to conduct this study without the low-dose HRTEM technique developed by our group in collaboration with KAUST Imaging and Characterization Core Lab scientist Daliang Zhang. The materials synthesized by Mohamed Eddaoudi’s group at KAUST and the theoretical calculations by Ben Slater at University College London and Sanliang Ling at University of Nottingham were essential contributions to this work. 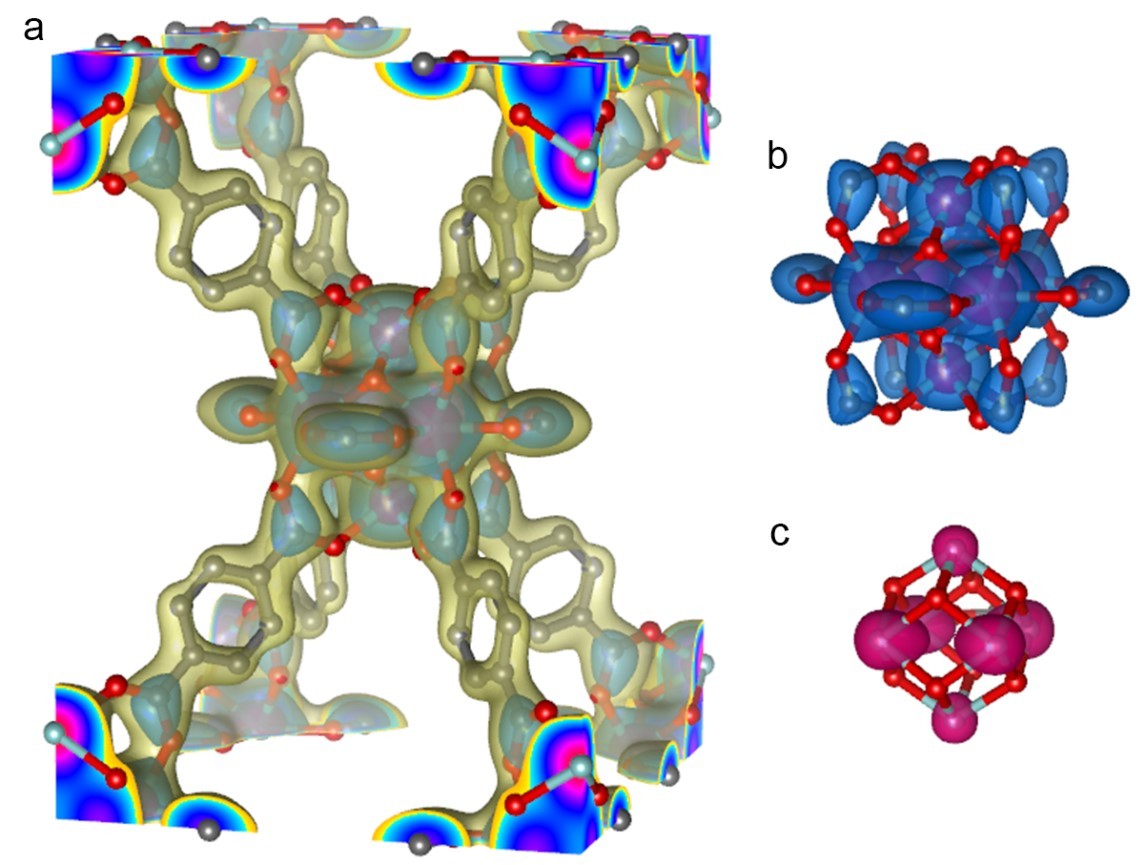 Seeing is believing: direct imaging of structural defects in a MOF

Structural defects in metal–organic frameworks (MOFs) play important roles in tailoring the properties of the MOFs to specific functions and applications, but determining the exact structures of these defects is challenging. Here, we use our novel low-dose, high-resolution transmission electron microscopy technique to probe defects in MOF UiO-66. We identify three types of defects and three-dimensionally reconstruct one of them with atomic precision. Our ability to engineer and identify structural defects that are catalytically active sites in this archetypal MOF enables us to study its structure-activity relationships in unprecedented detail.