To water, or not to water: that is the question

Here we report water-assisted upgrading of the renewable chemical, furfural, with increased rates and selectivity.

Controlling reaction rates and selectivity is of immense importance in catalysis. In a recent paper published in Nature Catalysis, we show that the rate of a hydrogenation reaction and its selectivity to different products can be tuned by changing the solvent in a liquid-phase reaction. The original manuscript was submitted in June 2017, but it took us considerable additional time and efforts to improve it. Here is a brief story behind it.

First, let’s briefly describe the topic of the paper.  We can say that when water is present as a solvent in a reacting system where a catalytic reaction is being carried out, it typically adsorbs on the active sites where the reaction takes place, inhibiting the rate. In this work, we showed that, at the water-metal interface, the surface-bound hydrogen can be shuttled through water to hydrogenate the aldehyde group in a biomass-derived oxygenate. This reaction path is different from purely surface-mediated hydrogenation in a vapor-phase reaction and leads to enhanced rates and selectivity towards polar products.

Second, let’s talk about our intricate path towards publication, which started very well. In fact, the original manuscript submitted in 2017 received positive comments and we feel that it was almost ready to be accepted. In this early version, we conducted the reaction in D2O Vs. H2O and observed significant amount of deuterated product selectively at the O of the carbonyl. We considered this a strong proof for the water-mediated hydrogenation route of the O. However, one reviewer asked whether we had considered that the deuterated product might be generated via H/D exchange between the OH product and D2O rather than via water-mediated deuteration of the reactant. In fact, the reviewer was correct; we conducted many control experiments, and the results were indeed in line with the reviewer’s concern.  The H/D exchange of the alcohol is very rapid in water (or D2O).

Since our DFT calculations were so conclusive in favor of our original idea, we decided to investigate the reaction kinetics in more detail to identify the rate-limiting step with and without water, which would undoubtedly prove or disprove our hypothesis. We were delighted to confirm that the kinetics showed a shift in the reaction order with respect to H2 from an organic to the aqueous solution. In addition, we performed additional free energy calculations rather than total energy calculations included in the original manuscript, as suggested by another reviewer. The distinct reaction order in H2 is a strong indication to different reaction mechanisms, further supported by the change in rate-determining step indicated by the free energy calculations. While all this additional work – reaction kinetics, free energy calculations, and a simplified micro kinetic analysis – delayed the resubmission we felt it was worth waiting; we ended up with a more complete and convincing picture.  Indeed, this was a long, but fruitful review process.

Moving forward, a few open questions still remain: Could the intermediate species bound to the water-metal interface be probed directly by spectroscopy? Could the entropy contribution in liquid-phase catalysis be calculated in a more accurate and computationally efficient way? Is there a long-range solvent effect? Could the dynamic solvent effect be included in the calculations of activation barriers? This year we are organizing a symposium on solvent effects in metal-catalyzed reactions in the 258th ACS National Meeting in San Diego. Many experts in the symposium may help address these questions.

A group of graduate and undergraduate students have contributed to this project, without them this work could not have been accomplished. Here, we acknowledge all the hard work done by them, as well as the support of the U.S. Department of Energy.

You can read more about our work in the Nature Catalysis paper.

This post was co-authored by Bin Wang and Daniel Resasco. 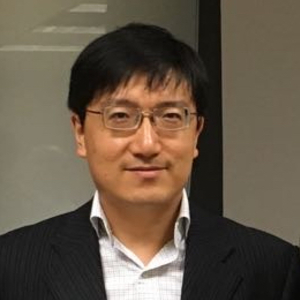