Gels have been utilised in an impressive array of advanced technologies, but controlling their structure remains a daunting task. Here we demonstrate that entanglements between helical gel fibres follow certain rules, enabling the production of intricate braided assemblies.
Christopher David Jones
Research Associate, University of Liverpool
Follow
Like Liked by Michal Filus and 1 other

Helical structures play important roles in biological processes, yet their aggregation into fibres—which can in turn form gels—is poorly understood. Now, the self-assembly of a linear pentakis (urea) peptidomimetic compound into helices that further intertwine into well-defined braided structures ha…

Mouldable like solids, but liquid-like in their ability to act as electrolytes and reaction media: were it not for their familiarity, gels might seem like wonder materials! Gels are, of course, indispensable as ingredients in foods and cosmetics, and even as vital components of biological tissues. Increasingly, however, these seemingly everyday materials are gaining recognition at the forefront of scientific research. My PhD in Jon Steed’s group at Durham University, UK, focused on gels in which chains of hydrogen bonded small molecules trap huge volumes of solvent. Because their fibres are supported by weak interactions, these gels are easily dissolved by heat or added salts, making them useful as ion sensors, drug delivery devices and crystallisation media.

Our recent paper developed from a niggling conundrum: can gel fibres, like their constituent molecules, be made to link up in particular patterns? I was encouraged by the prevalence of well-ordered fibres in biology, such as the actin filaments in muscles, and the development of biomimetic gels by researchers such as the Rowan Group at Nijmegen. A general feature of these materials is the presence of helicity: twisted fibres tend to be uniformly thick to minimise strain, and lock together to form neat helical bundles. Oligo(urea)s seemed like a good starting point, since they structurally resemble helix-forming peptides and display predictable hydrogen bonding motifs.

Molecular flexibility was of key importance. Whereas the tris(urea) we designed did not form gels, the longer, floppier five-urea molecule produced just the helical assemblies we expected – and more! SEM images showed helical bundles, but also a striking array of flat braided structures. Thanks to the wonderful postgraduate development courses available at Durham, I already had the training to model the helices using MD simulations (Fig. 1). And by happy coincidence, a Leverhulme Trust programme named the Scientific Properties of Complex Knots (SPOCK) had just kicked off at Durham, providing a researcher (Dr Kate Horner) with the expertise to help me tackle a central puzzle: why do the helices form only certain braids, out of the hundreds of possible patterns that should be possible? The study highlighted a number of rules governing the entanglement of helices, and showcased the utility of braid theory in understanding gel fibre networks.

Fig. 1 SEM image of braided gel helices and an MD simulation of the helix structure.

Like many projects, my research was aided by serendipitous discoveries. First of these was an unusual intermediate containing both a nucleophilic amine and electrophilic carbonyl imidazole group. Remarkably, coupling of these groups can be prevented by precipitating the material as it forms. The compound was used to install the urea groups of the target molecules, while crucially providing new unprotected amine groups for further urea-forming reactions.

A second stroke of luck came about when I filtered our gelator sols. Helices can twist in two different directions, like the fingers of our left and right hands, and the oligo(urea) gels usually contain equal amounts of these mirror-image forms. However, brief contact with cotton wool creates a strong preference for the formation of right-handed helices, to the extent that almost no left-handed helices can be seen! This effect was completely unexpected and of great interest, since the handedness of helices strongly affects the braids they can form. I look forward to finding out how our gels respond to other chiral materials, and whether changes in braiding can be used to control their rheological behaviour. Understanding the interactions between gel fibres is a monumental task, but I hope that this study has tied up some of the loose ends.

I am grateful to my brilliant colleagues at Durham University for helping me to untangle the mysteries of gels, and to the EPSRC and Leverhulme Trust for funding this project.

You can read more about our work in our Nature Chemistry paper. 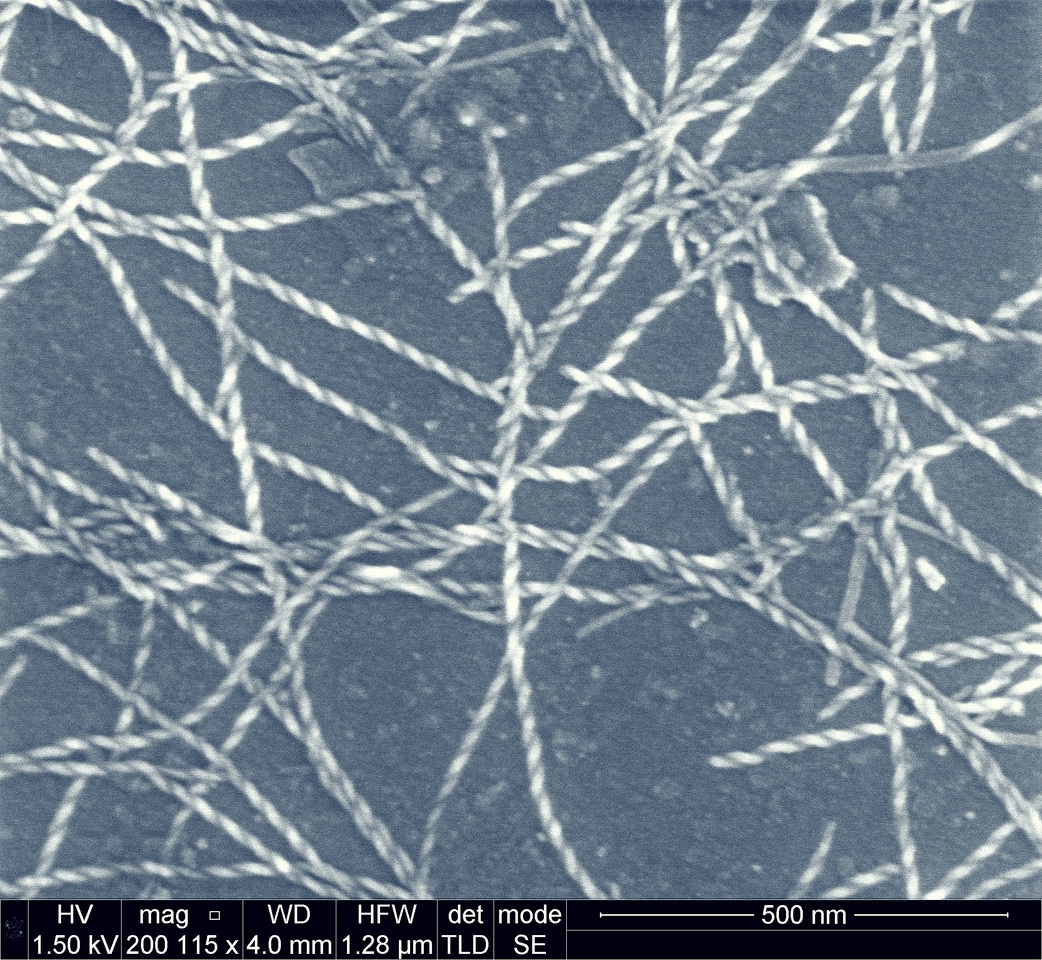 Gels have been utilised in an impressive array of advanced technologies, but controlling their structure remains a daunting task. Here we demonstrate that entanglements between helical gel fibres follow certain rules, enabling the production of intricate braided assemblies.