Stochastic particle to particle variability is often overlooked while studying the coverage of nanoparticles. Using a probabilistic model to account for sources of randomness allows us to effectively study the functionalization of nanoparticles.

It has been 8 years since I, as a bachelor student in mathematics, enrolled in a biochemistry course to broaden my horizon. Even though this did not change my life back then, it came in handy in the collaboration between chemists and mathematicians at the Institute for Complex Molecular Systems (ICMS) of Eindhoven University of Technology. Our recent publication in Nature Communications is the result of this interdisciplinary research.

Measuring the nanoscale distribution of biological molecules on biological surfaces (e.g. plasma membranes of living cells) and synthetic surfaces (e.g. nanomaterials used for therapy and sensing) is of crucial importance for the development of novel biomedical applications. In this framework, new powerful microscopes are used to study these surfaces with single molecule resolution. However the stochastic phenomena that are intrinsic to the observation of single molecules make the interpretation of the data difficult and create the need for new stochastic theory and simulations. To illustrate this difficulty consider the three functionalized spherical nanoparticles presented in the Figure 1 below.

I generally like to ask non-probabilists which particle they expect to be fully randomly functionalized. The majority tends to go for the equidistant spaced, outer right, particle. This is FALSE, it is much more likely that this configuration is the consequence of an equilibrium of forces that make functional groups roughly equispaced, and thus of non-random functionalization. As a matter of fact the other two particles ARE the result of a fully random simulation, even though paradoxically we do observe clustered patches on the nanoparticles. It is crucial to note that homogeneous functionalization can give rise to patches of functional groups, and can result in a striking stochastic variability between individual nanoparticle coverage.  This stochastic variability should be appropriately accounted for while studying homogeneity of nanoparticles.

In practice, the study of random functionalization is even more challenging: one does not have access to the exact locations nor number of the side groups configurations. Instead one has to rely on observed signals transmitted by the sources and processed by the software of the super-resolution microscope. The random number of signals per source and the measurement error of each signal make it quite hard to recover the source locations. These difficulties are illustrated in Figure 2 presented below.

Figure 2|Creating a model for dSTORM-mediated analysis of functional group distribution. Schematic depiction of the steps involved in the observation of fluorophore patterns on a spherical nanoparticle. Fluorescent dyes (red spheres) are, either chemically or physically, grafted to the nanoparticle (grey sphere) according to an unknown spatial distribution. The collection of localizations (red crosses) acquired during subsequent dSTORM imaging does not yield this spatial distribution exactly, due to a finite localization accuracy (I) and blinking of the dyes (II), leading to overcounting artefacts (III).

In our recently published work we study homogeneity of fluorescent molecules on spherical nanoparticle beads using direct stochastic optical reconstruction microscopy (dSTORM) measurements. We developed a mathematical model to describe the dSTORM dynamics to efficiently recover the source locations. Additionally, the model has been used to create computer-generated synthetic dSTORM measurements of homogeneously functionalized nanoparticles that can be used as a comparison. For these simulated beads we know the true source locations and can thus verify whether our algorithm accurately recovers these locations from the (simulated) signals. More specifically, to study homogeneity, we are interested in characteristics like the nearest-neighbor distance (NND) of functional groups. We were able to appropriately recover the NND distribution of the (simulated) homogeneously functionalized particles (Figure 3A). Thereafter we derived the NND distribution of the experimental beads of interest and compared these to the distribution as expected under the assumption of homogeneously functionalization (Figure 3B).

Figure 3|Analysis of the functional group distribution on the surface of nanoparticles. Probability density function of NNDs. Plot includes NND distributions for the actual fluorophore locations in a stochastically homogeneous simulation (dashed blue), for the estimated locations from the stochastically homogeneous simulations (dashed red) and the estimated locations from the experimental dSTORM measurements (solid yellow).

Stochastic fluctuations proved insufficient to explain the experimentally observed variability and the, commonly assumed, hypothesis of stochastically homogeneous (“fully random”) attachment of functionalities was rejected for these experimental beads. More generally, these results cast doubt on the uniform surface coverage commonly assumed in the creation of amorphous functional nanoparticles

You can read more about our work in our Nature Communications paper. 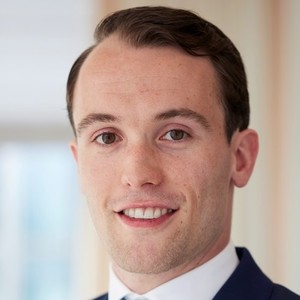