Hyperpolarized materials can be transported in solid state even with radicals present. Such an approach offers advantages over the established transfer in liquid state: Most notably high speed and scalability to (almost) arbitrarily small sample volumes.
Karel Kouril
Research Fellow, University of Southampton
Follow
Like Liked by Michal Filus

Dissolution-dynamic nuclear polarization is able to enhance nuclear magnetic resonance signals, but requires complex procedures to generate hyperpolarized nuclear spins. Here the authors establish a fast and facile method to transfer hyperpolarized samples into the liquid solution where the measurem…

Bullet-DNP owes its existence to a false hypothesis. Back in 2016 we wanted to observe the para-to-ortho conversion of water molecules at room temperature. In the supramolecular endofullerene H2O@C60 a single water molecule is encapsulated in a fullerene cage. We knew from previous experiments that the para-fraction of water molecules can be enriched by storing the sample at 5 Kelvin for many hours. All we had to do was to dissolve the para-enriched endofullerenes in ambient temperature solvent and observe the water signal with an NMR spectrometer – the signal would grow as water converted from NMR silent para-water to NMR visible ortho-water.

This called for long thermalisation of the sample at liquid helium temperature followed by a very fast temperature jump and immediate observation in a high-resolution NMR spectrometer. The required times were many hours for the thermalisation and "as fast as we can make it" for the warm-up (we did not know how fast the conversion was going to be).

We were uniquely posed to do such an experiment - we not only had the endofullerene but also a working prototype of a dissolution dynamic nuclear polarization (D-DNP) setup - an apparatus meant to strongly polarize nuclear spins at cryogenic temperatures, melt the polarized substance with hot solvent and quickly transfer the resulting liquid into a high-resolution NMR spectrometer for observation. For our purposes we only needed the low temperatures and fast transfer capability. So we tried it: We loaded the endofullerene, cooled it down, waited overnight, did the transfer next morning, observed. And we saw nothing. No conversion, just a very noisy thermal equilibrium signal.

Our conclusion was simple: We were too slow. The transfer of the solution through the long tube from the polarizer to the NMR magnet took approximately 10 s, and it was quite conceivable that this was enough for the process we wanted to see to be complete before we were able to look.

Unwilling to give up just yet we decided to try one more thing. We bent a piece of steel tube into a U-shape to load pieces of frozen endofullerene solution into it from one end and shoot them out by applying pressurized helium from the other end when needed - this should be fast enough. It was. The idea was simple, but a few tweaks were required. We ended up loading the frozen solution into small teflon buckets to protect it during transfer and we also had to protect our tube from quickly forming ice blockages by applying helium overpressure during sample loading and ejection. After a few weeks of testing the experiment worked - we saw the conversion. Ironically it turned out to be rather slow, taking almost a minute to complete. We had not seen it earlier because our sensitivity was not sufficient – the sample had been too diluted.

The transfer of the solid capsule was remarkably fast. It was easy to achieve speeds of over 100 m/s so we were able to cut the transfer time by about a factor of 100. Seeing how fast it was we decided to try whether this could be used to transfer the hyperpolarized solids generated by dynamic nuclear polarization (DNP). This was a much bigger task - we had to upgrade our bent piece of tube to a proper DNP polarizer - it meant adding provisions for microwave irradiation and NMR observation. And on top of that we needed to ensure we had a sufficiently strong magnetic field all along the transfer path. A lot of equipment building and debugging commenced, and in early summer 2017 we had a working prototype that confirmed that substantial spin polarisation could indeed be preserved during transfer.

Figure 1 The original bent tube (left) and the bullet-DNP insert (right). Substantial modifications were needed to test the transfer of hyperpolarized solids.

Knowing we could do the transfer we started to focus on the next issue - the NMR linewidth. Our initial setup produced very inhomogeneous solutions which resulted in poor spectral resolution. We tried several designs of dissolution and injection device and managed to improve this by more than a factor of ten.

There still is ample room for improvement. But we believe that bullet-DNP has a lot to offer. The transfer in solid state and fast dissolution will enable the observation of rapidly relaxing molecules. The method works for (almost) arbitrary sample volumes and does not require significant sample dilution. This makes it a supreme match for analytical and spectroscopical applications where the amount of sample is limited and one needs to squeeze out every last bit of usable signal. We expect that bullet-DNP will find many exciting applications in the future. 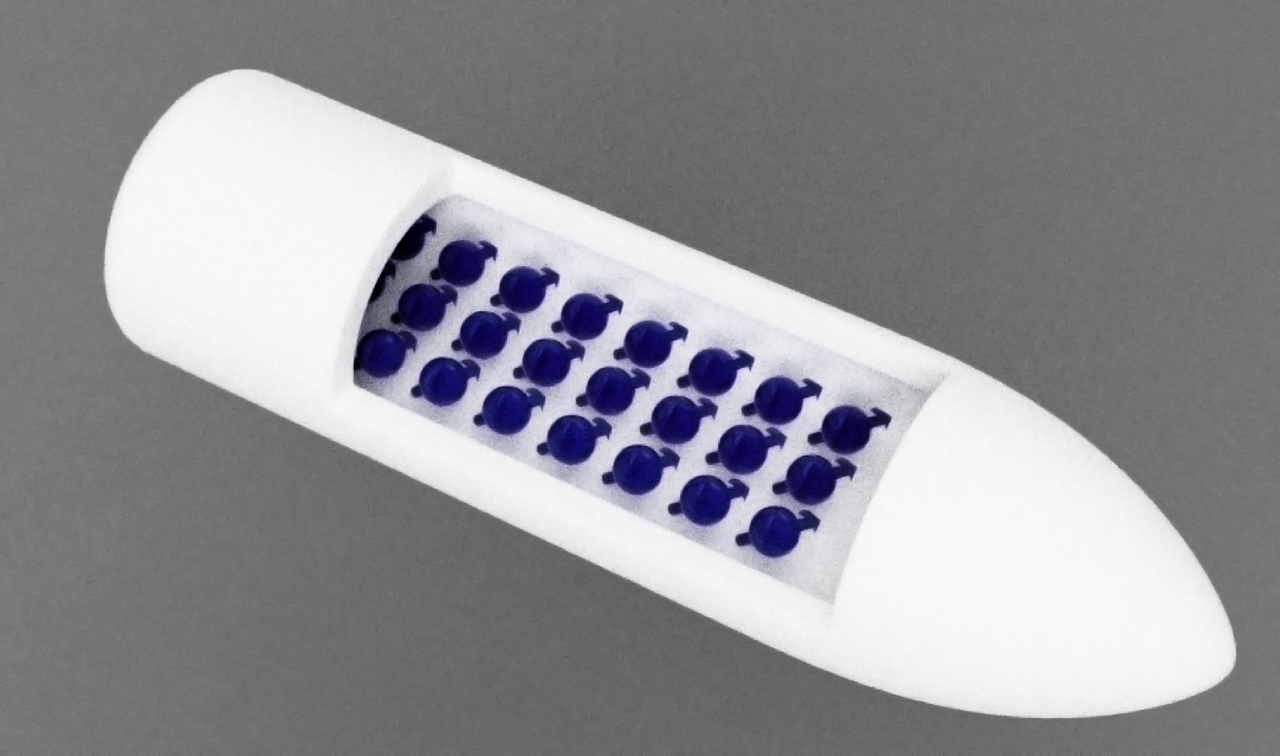 Hyperpolarized materials can be transported in solid state even with radicals present. Such an approach offers advantages over the established transfer in liquid state: Most notably high speed and scalability to (almost) arbitrarily small sample volumes.