We provide insights into the enzymatic dearomatization of the naphthoyl system via hydride transfer at a redox potential of E°’ = –493 mV, far outside the range of previously known hydride carriers in biological systems such as pyridine nucleotides, flavins or deazaflavins.

Under anaerobic conditions, the lack of oxygen as a strong and readily available oxdidant prevents the usual routes of oxygenation reactions as initial functionalization to cleave the highly stabilized aromatic moiety  and represents one of the most challenging enzymatic reactions as it requires low-potential electrons. In chemistry, the so-called Birch-reduction is used for aromatic ring-reduction and proceeds at cryogenic temperatures in liquid ammonia with alkali metals as electron donor. However, the harsh conditions and low enantioselectivity often prevent an economic application. During the anaerobic degradation of naphthalene, 2-naphthoyl-CoA is reduced under ambient conditions by an enzyme called 2‑naphthoyl‑CoA reductase (NCR). Reduction is the predominant strategy employed by microorganisms to tackle aromaticity under anoxic conditions and often proceeds at the negative redox potential limit for biochemical reactions.

As a biocatalyst, NCR combines both selectivity and sustainability and represents an alternative to the Birch reduction, providing access to an unprecedented route to conjugated unsaturated compounds directly from a naphthoic acid backbone. NCR reduction enables a regio- and stereoselective trans-hydrogenation and in contrast to Birch reductions, mild reductants such as sodium dithionite can be used as artificial donors. We were able to solve the crystal structure of this remarkable enzyme and identify the molecular principles behind its function.

In this paper we present evidence that the mechanism of NCR involves an extremely negative hydride transfer that proceeds at almost -500 mV. This finding is very astonishing, as single-electron/proton transfer (analogous to the Birch reduction) is the usual mechanism for biological reductions in this redox potential range. Even more striking is that the architecture of NCR is similar to a well known class of so called “old yellow enzyme” (OYE) ene-reductases, that were first isolated in the 1930s. This class of enzymes usually catalyzes the NADPH-dependent reduction of activated double bonds and members are already used in asymmetric reductions in synthetic routes. NCR is the first OYE-like enzyme that is capable of reducing activated aromatic double bonds. The protein backbone is modified to turn a simple OYE into a highly specific aromatic-ring reductase and the active site environment tunes the reduction potential of a common flavin mononucleotide (FMN) to the limit of biological hydride transfer processes. The electrochemical and spectrophotometrical analysis of NCR revealed the highly cooperative interplay of electron-transfer cofactors that enables unidirectional transfer of single electrons from a flavodoxin-like low-potential one-electron carrier (FAD) to an FMN for low-potential hydride transfer and prevents the reverse reaction. QM/MM calculations support our findings that NCR indeed catalyzes the most negative hydride transfer in biology known to date.

NCR is a relatively robust enzyme and heterologous expression can be easily performed in Escherichia coli (40 mg/L medium). The reductase is oxygen-tolerant and stable at room temperature. Our work serves as an example of the untapped potential hidden in metabolisms of anaerobic bacteria, a treasure trove for the discovery of novel enzymatic reactions. Ene-reductases are already used in industrial applications and NCR could serve as yet another highly specific, enantioselective tool for asymmetric reductions. 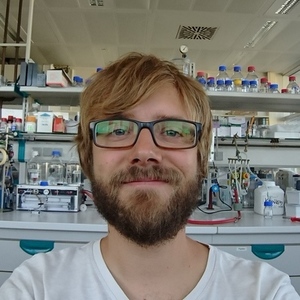