In 2017, we came across an interesting and elegant article by Dömling et al1, wherein they described a Lewis acid promoted Ugi 4-component reaction (CR) of α-amino acid derived isocyanide, TMSN3, N-Boc protected hydrazine and aldehyde/ketone. Subsequent literature research indicated the seemingly easy asymmetric Passerini and Ugi multicomponent reactions were still under explored2. Intrigued by good performance of N,Nʹ-dioxide-based chiral Lewis catalysts, we commenced the investigation of the aforementioned Ugi-4CR with either functionalized isocyanide or simple isocyanide by the use of our chiral Lewis acid catalyst. However, no enantioselective control was observed. How about alkene instead of carbonyl compounds or imines? Only sporadic racemic examples were disclosed, thus we carried out the reaction of dimethyl 2-(cyclohexylmethylene) malonate with 2-naphthyl, TMSN3 and a-amino acid derived isocyanide. Unfortunately, only messy mixture was afforded. Then we got to know these seemingly easy asymmetric Passerini and Ugi multicomponent reactions were actually very challenging subjects. The succulently meticulous screen provided a promising result, as described in manuscript, the reaction of dimethyl 2-(cyclohexylmethylene) malonate 2-naphthyl isocyanide and TMSN3 occurred smoothly only in the presence of Mg(OTf)2/L-PrPr2, affording the three-component and four-component products.

Initially, we thought a mixture of diastereomers of four-component products was yielded based on primary analysis of 1H NMR spectroscopy. However, several phenomena hinted that our hypothesis maybe not correct. Firstly, only two peaks were separated consistently for this “diastereomers mixture” by CSP-HPLC analysis. Secondly, there is no any regularity for similar substrates. In addition, the diastereoselectivity of four-component products did not change in the same solvent after recrystallization. These above results suggested that there was an equilibrium between these two compounds. Therefore, Variable temperature and solvent NMR studies as well as careful analysis of 2D NMR were carried out, the obtained outcomes collectively pointed out that the rotamers3 existed in our system.

Another beauty of our work is the extension to asymmetric direct dearomatization of nonactivated isoquinoline. On one hand, isoquinoline was the only successful example so far due to the existence of many competitive reactions. On the other hand, it also exhibited the potential and powerful of the zwitterionic intermediate generated by nucleophilic addition of isocyanides to polar C=C bonds.

We would like to cite the comments4 from Michael P. Doyle (one of reviewers) as the concluding remarks: “The feature of this manuscript that is most significant is the potential of the isocyanide-alkylidine adduct for transformations beyond those reported in this manuscript, and with the discovery that the magnesium(II)-N,N'-dioxide ligand is appropriate for high enantiocontrol, this manuscript can be expected to stimulate further research in the area.” 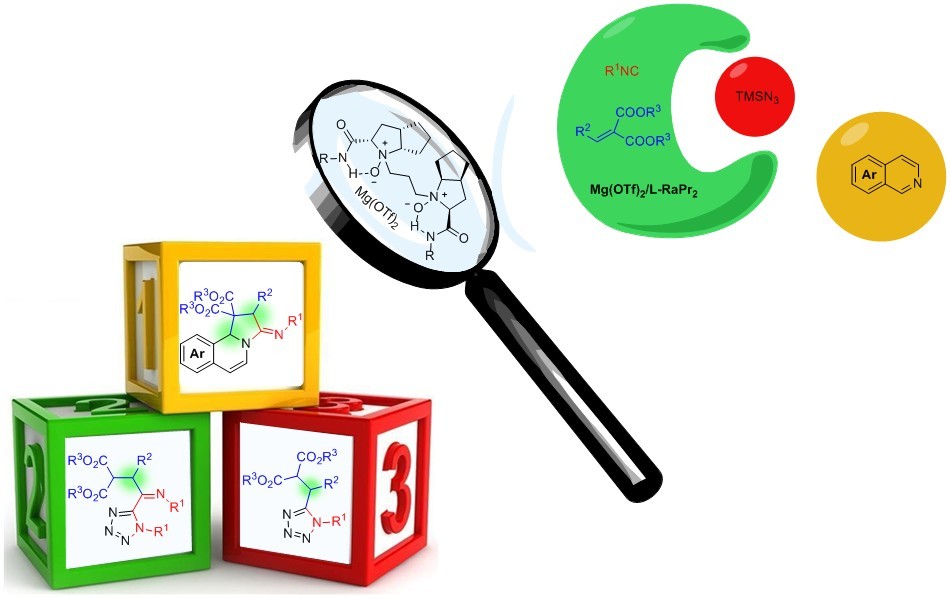