We’re sitting at lunch in Basel about four years ago; me and two close friends from Novartis. All are on the same page; we all get it: chemistry in water is the future. Midway through, I raised the question: Since our chemo-catalysis and nature’s bio-catalysis are both done in water, why not do each in the same flask, in tandem? They loved it. And while at the time this might have seemed like a great idea, my former Ph.D. mentor at Yale, Harry Wasserman, had taught me that “ideas are cheap.” I had no plan, no group knowledge of, or experience in, enzyme-based synthetic chemistry. Even worse, at that time, there was no student “available” in the group to make this happen. So, I did what any advisor would do: I waited; ... years.

Eventually, a postdoc in the group, Margery Cortes-Clerget, was willing to seriously consider this chemistry, saw the potential, and then soon thereafter, accepted ownership even though she was engrossed in other, unrelated projects. We initially discussed simply testing the compatibility of our “designer” surfactants with various enzymes commonly used in synthesis. After all, if these two could not co-exist in water, there was no project here to pursue. But we also wondered where to start; which type of enzyme is going to be first? The answer was hardly driven by science; rather, I approached a close friend at Johnson Matthey, Tom Colacot, and convinced him to have their “kit” containing keto-reductases sent to us at a very attractive price: free. It arrived soon thereafter, and with four enzymes in this category therein, it was finally time to determine if water as the reaction medium allowed us to “bridge the gap” between chemo- and bio-catalysis.

We immediately challenged these enzymes, since the sequence envisioned a first reaction taking place within nanomicelles derived from our uniquely qualified amphiphile TPGS-750-M. But prior to addition of an enzyme (along with its co-factors, etc.), several types of transition metal-catalyzed processes had already produced a product that would become the substrate for the enzyme, along with all the “baggage” that remained in the pot. This included a substantial amount of several metals, including Pd and Cu from prior Sonogashira reactions, and Pd from Heck couplings; Rh, from asymmetric conjugate addition reactions, and Au, from alkyne hydrations. The enzymatic responses to all of these was remarkably the same: no problem!

Notwithstanding these successful initial chemo- followed by bio-catalyzed sequences, the real punchline to this study lied elsewhere. That is, we had discovered along the way that the very presence of TPGS-750-M- derived micelles dramatically mitigates enzymatic inhibition, a common occurrence causing variations in reaction progress. In other words, the extent of conversion in all cases studied was greater, and in some cases, dramatically so, when this surfactant was simply in the water. This phenomenon was characteristic of several other nonionic surfactants, although our TPGS-750-M seemed to perform the best. The rationale behind these observations put forth, following extensive discussions with my colleague and expert enzymologist, Norbert Reich, focuses on the role of micelles as “reservoirs” for both substrate and product (see below). That is, they entice both away from localizing, and thereby blocking, the enzymatic pocket, providing an alternative “housing” in which to reside. By virtue of substrate release from the micelles into the gross aqueous medium, a phenomenon characteristic of micellar catalysis, in general, exposure to the water-soluble enzyme is thereby controlled, leading to maximum conversion and hence, yield. Unplanned, simple, but still, very cool. 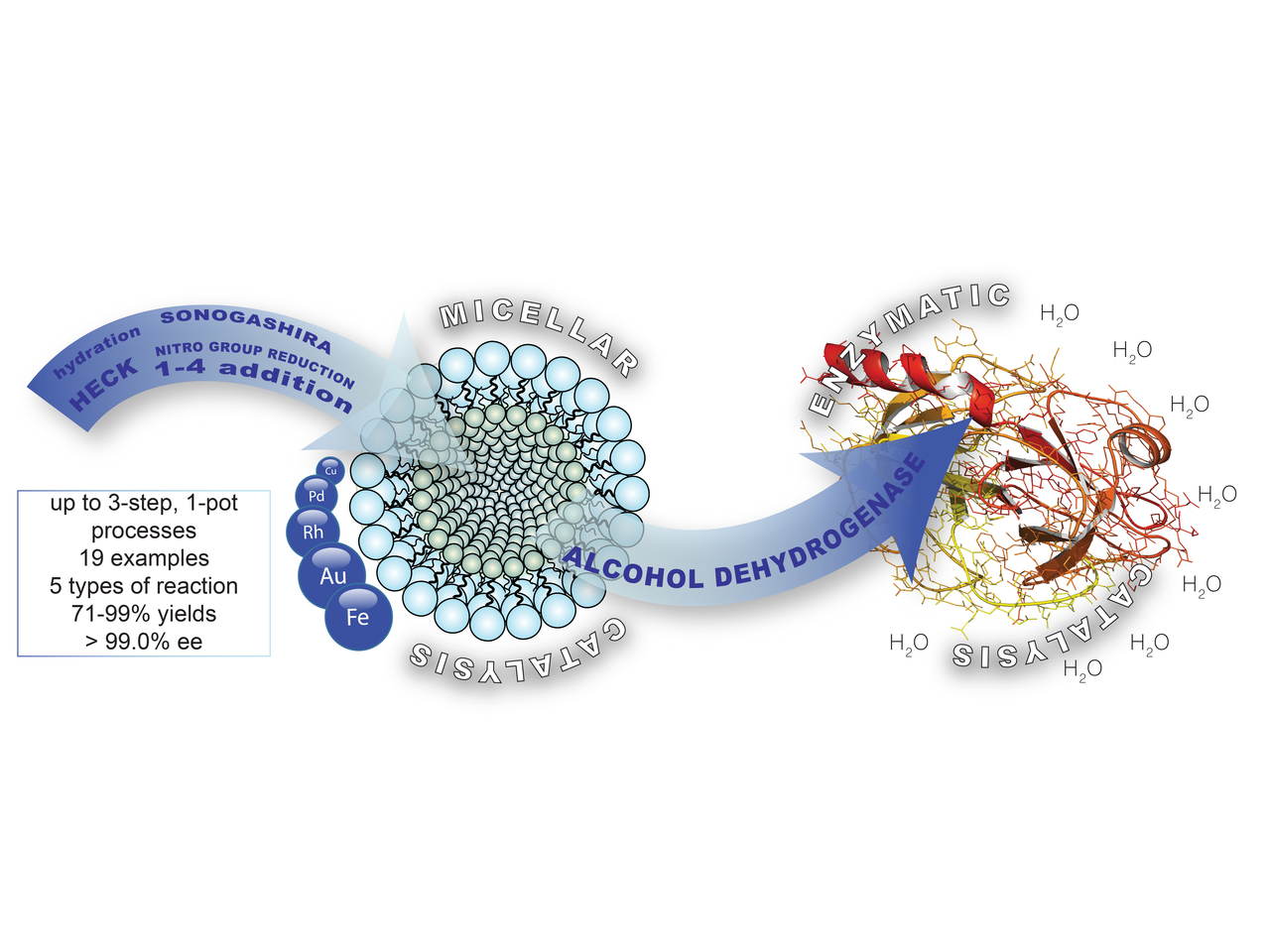