Electrocatalytic water oxidation is a rate-determining step in the water splitting reaction. Here, we for the first time report one single atom tungsten (W6+) doped Ni(OH)2 nanosheet sample with an outstanding oxygen evolution reaction (OER) performance. Spherical aberration-corrected electron microscopy confirms that the single atom W doping occurs by replacing one Ni atom. The w-Ni(OH)2 exhibits an activity toward water oxidation in a 1 M KOH medium with an overpotential of 237 mV reaching a current density of 10 mA/cm2. Density functional theory (DFT) calculations confirm that the O radical and O-O coupling are both generated at the same site of W6+. This work demonstrates that W6+ doping can promote the electrocatalytic water oxidation activity of Ni(OH)2 with the highest performance obtained here of any comparative studies reported in the literature.

As we know, with the energy crisis and environmental pollution increasing, the development of renewable energy has become a consensus of countries in the world. The Australian continent possesses excellent wind resources by world standards and the highest solar radiation per square meter of any continent in the world. Therefore, due to the advantages of convenience, high efficiency, and no pollution, electrocatalytic water splitting for hydrogen and oxygen generation driven by the conversion and storage of intermittent solar and wind energies has been considered as a most promising and attractive path to obtain clean energy from abundant water resources, support energy security, and reduce emissions. The key of achieving high-performance electrocatalytic water splitting production is to obtain high activity and bifunctional (hydrogen evolution reaction (HER) and oxygen evolution reaction (OER)) electrocatalysts, however, the half reaction of oxygen evolution remains the bottleneck for such progress. Because the OER is kinetically sluggish and needs the necessary two steps of O-H bond breaking and attendant O-O bond formation, which includes the transfer of four electrons, the design of a considerable OER electrocatalyst and improving the efficiency of OER are needed.

In this case, the noble metal-based catalysts, for example, IrO2 and RuO2, exhibit attractive OER activity, but their rare nature hinders their large-scale application. In recent years, a great many non-noble metal-based alternative OER catalysts using abundant and low-cost 3d metals (Fe, Co, Mn, Ni) have been studied as popular electrocatalytic materials with increasing activity and stability. In particular, Ni(OH)2 based samples have garnered a great interest with studies showing their encouraging water oxidation potential. Additionally, the doping of elemental Fe with Ni(OH)2 at low content levels has been shown to greatly increase the OER performance. However, although the replacement of Fe3+ to Ni2+ in the Ni(OH)2 sample has been shown to enhance oxygen evolution through extensive study, the reaction behavior on the exposed/contacted Ni(OH)2 surface is rarely studied and reported. Moreover, the OER performance of Ni(OH)2-based electrocatalysts still need improvement by doping and the finding of a suitable element remains to be developed. Recently, related work confirmed that single-atom doping is useful for assisting suitable reaction sites for intermediates formation.

Herein, our research team and our collaborators for the first time report one single atom W6+ doped Ni(OH)2 nanosheet sample (w-Ni(OH)2) with an outstanding OER performance. What is more, this is also the first report that one element doping has provided suitable reaction sites for both OER intermediates. We successfully synthesized the nanosheet sample of w-Ni(OH)2  from bulk w-Ni(OH)2-e via the simple alcohothermal method and then treated via long-time ultrasound in an ethanol solution. Furthermore, through the spherical aberration-corrected electron microscopy, we confirmed that the single atom W doping occurs by replacing one Ni atom in Figure 1. In conjunction, the w-Ni(OH)2 exhibited low reaction potentials at high current densities, with an overpotential of 237 mV reaching a current density of 10 mA/cm2. Moreover, a high current density of 80 mA/cm2 is achieved with only an overpotential value of 267 mV.

Furthermore, based on density functional theory (DFT) calculations in Figure 2, the w-Ni(OH)2 showed exothermic reactions and we confirmed that the O radical and O-O coupling are both generated at the same site of W6+. Owing to the d0 characteristic with a low spin-state, the exposed W6+ doping sites in layered Ni(OH)2 exhibited more outermost vacant orbitals, resulting in more H2O adsorption, OH-/O radical formation reactions, and reducing the interfacial resistance of the electric double layer (Helmholtz layer, HL). This work demonstrates that W6+ doping can promote the OER activity of Ni(OH)2 with the highest performance obtained here of any comparative studies reported in the literature. We believe that it will help us understand the effect of the HL on the electrocatalytic water oxidation and provide a new direction to design doped OER catalysts.

Figure 2. Mechanism of OER on (a) W-doped Ni(OH)2 and (b) bare Ni(OH)2catalyst based on DFT calculations, in which red, white, green and blue atoms represent the oxygen, hydrogen, nickel and tungsten atoms, respectively.

For more details, you can read more about our work in our Nature Communications: https://www.nature.com/articles/s41467-019-09845-z 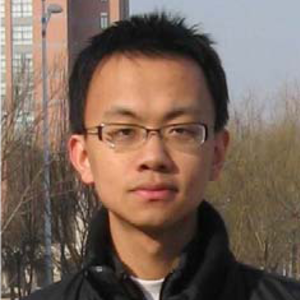