In daily life, we are accustomed to turning on or off a device depending on our needs: for instance, in broad daylight we normally switch off the light and only turn it on in the evening. Such control is not only useful in the macroscopic world, but it is also one of the holy grails at the molecular scale. For example, an anti-cancer drug has the function to kill tumor cells, but should not kill healthy cells. To prevent the latter, we need a switch with the dimensions of a molecule that is able to react to an external stimulus, turning the anti-cancer drug on when it is near a tumor cell, and off if not. Such control over the drug can be obtained if a molecular photoswitch is introduced, that is, a molecule that can be addressed by light in a controlled way. Given the huge number of processes one would like to control at the molecular, microscopic and macroscopic scales, there is a huge interest in (and quest for) new molecules with improved properties. Here we present our personal account behind the discovery of a new, remarkable photoswitch.

It all started when dr. Wiktor Szymanski found a recent paper in Tetrahedron on using the Passerini multicomponent reaction for new medicinally relevant structures (Soeta A et al., Tetrahedron 72, 7901–7905 (2016)). In this beautiful work, some structures where reported that were similar to the hemithioindigo photoswitch (Petermayer C and Henry Dube, Acc. Chem. Res. 51, 1153–1163 (2018)), but containing a C=N instead of a C=C double bond. At that time, PhD student Mark Hoorens was exploring hemithioindigo photoswitches, which are visible-light-responsive and combine the thioindigo and stilbene moieties. The structure containing a C=N double bond would thus be half thioindigo and half azobenzene (see Figure 1), and since C=N double bond photoisomerization had been reported before for different structures, we argued that such a molecule should also be a photoswitch.

However, after Mark Hoorens synthesized the compound and tried to switch it in a UV/Vis spectrometer, he surprisingly found that irradiation did not change the absorption spectrum. Several possible explanations came to mind, the most simple one that the compound does not switch at all. But it might also be that the absorption spectra of both isomers are almost identical. Or that the molecule does switch but that the re-isomerisation occurs so fast that it is not possible to observe changes with a simple UV/VIS spectrometer. At that time we did not really look further into all these possibilities and the vial with the compound disappeared in the storage for one and a half year.

It was after a meeting with prof. Wybren Jan Buma from the University of Amsterdam that we remembered we had this compound lying around. Mark visited the labs in Amsterdam where he and Michiel Hilbers used a set-up that allowed them to look at changes in the absorption spectrum on a nanosecond to millisecond timescale (see Figure 2). In the thermally stable state, the compound has an absorption maximum around 430 nm. Upon irradiation, we found, however, a species that absorbs around 530 nm and with a lifetime of about 10 to 20 ms. If this species would indeed be the other photo-isomer, this would be a spectacular and completely unexpected result since up till then fully-visible-light switches with such a large band separation were completely unknown.

Figure 2: Transient absorption set-up at the University of Amsterdam, used for the nano- to millisecond timescale spectroscopy.

After the experiments in Amsterdam, we teamed up with dr. Adele Laurent and dr. Miroslav Medved computational chemists from the University of Nantes, France and Palacký University, Czech Republic, respectively. Their calculations predicted absorption maxima of the two photoisomers that were very similar to those observed in Amsterdam, but also a barrier for re-isomerization that fitted excellently the observed half-lives. At the same time, we turned to dr. Mariangela Di Donato (European Laboratory for Non Linear Spectroscopy (LENS), Florence, Italy) for further experimental confirmation of the structural changes and to investigate the photo-isomerization mechanism. With her facilities (see Figure 3) we could follow the excited-state dynamics with a femtosecond time resolution, and found that photo-isomerization occurs on an ultrafast time scale and led to transient absorption spectra that seamlessly connected to the nanosecond experiments. Mark synthesized several more varieties and with them we experimentally explored the properties of this new switch and how they can be adapted, always supported by computational studies. As it turns out, this is an incredibly versatile switch that can be operated under a wide variety of experimental conditions including biological ones, and with properties of we which we foresee that it will be relatively easy to tune them to the specific needs of users.

Figure 3: Setup at the European Laboratory for Non Linear Spectroscopy (LENS) in Florence, Italy, used in the study for the femtosecond and picosecond time scale spectroscopy.

We were very enthusiastic about the properties and behavior of the new photoswitch we identified. We had one final task left, and that was to come up with a name for this new switch. Based on the C=N double bond and the thioindoxyl fragment, we decided to call it IminoThioIndoxyl (ITI). We believe that ITI’s are a great new tool for developing photocontrolled systems. You can read all about it in our recent paper. The future is bright - and in the visible range! 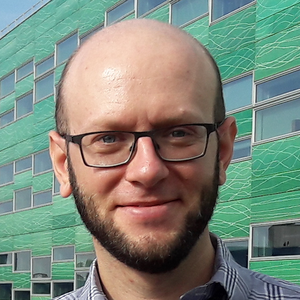