Peptides derived from microbial NRPS systems play an important role for our society since many of them are used clinically against different diseases. NRPS generate these peptides in an assembly line like fashion due to a modular and multifunctional enzyme function. Their efficient manipulation in order to change the peptide structure was always desired and has been achieved now in an efficient way using newly identified assembly points in these giant enzyme systems.
Helge B. Bode
Molekulare Biotechnology, Goethe University Frankfurt
Follow
Like Liked by Michal Filus

Natural products (NPs) and their derivatives are the spine of our antibiotic drugs, but they are increasingly jeopardized by widespread antimicrobial resistance (AMR) in once susceptible bacterial pathogens. A particular focus of current attention are the ESKAPE pathogens (Enterococcus faecium, Staphylococcus aureus, Klebsiella pneumoniae, Acinetobacter baumanii, Pseudomonas aeruginosa, and Enterobacter species), not only responsible for a wide range of infections but also increasingly resistant to common antibacterial drugs – according to the WHO resistance exceeded 50% in many regions. Whereas the rapid emergence of AMR emphasize that the antibiotic discovery process requires constant feed with new chemical compounds to find new leads, disenchantment with NPs as source of new drugs and lack of success using synthetic compounds conspire to move investment in research and development away from the antibiotic’s arena.

A great proportion of these drugs are generated by large, multifunctional and modular biosynthetic enzymes (mega-synthases) like non-ribosomal peptide synthetases (NRPSs) – our preferred object of study. To create even more valuable drugs with improved clinical properties, respective enzymatic machineries must be engineered. Unfortunately, most attempts to achieve assembly line pathway engineering have yielded biosynthetic machineries that are either greatly impaired in their activity or non-functional.

Recently, we offered a first solution to this challenge. We were able to delineate guidelines - denoted as the concept of eXchange Units (XUs) - to engineer modular NRPSs to biosynthesise new-to-nature peptidic natural products with unprecedented efficiency. Analogous to playing with LEGO®, by combining building blocks from 15 NRPSs we reconstituted naturally available peptides, peptide derivatives, and generated new-to-nature peptides de novo. Whereas the restrictions introduced by the concept of XUs are an integral feature of its success and reliability, these restrictions call for a very large number of available building blocks to design novel biosynthetic pathways in considerable numbers. We were therefore keen to come up with a more disruptive strategy to overcome the bottleneck.

Our current work is an extension of this previous work, investigating possibilities to overcome limitations of the XU concept. In addition to achieving this, we also created randomized natural product-like peptide libraries applying an ‘one-shot’ TAR-based cloning strategy. In summary, we utilized the identified and interchangeable XUCs (eXchange Unit Condensation domain concept) to produce more than 50 non-natural peptides exhibiting non-natural amino-acids and heterocyclic elements from scratch in very good yields of up to 280 mg/L.

We hope that access to these novel strategies will pave the way for efficient biosynthetic pathway engineering of NRPSs and thus the generation of novel bioactive peptides that in the future will result in the total biosynthetic manufacture of a range of products of considerable commercial and societal importance. We will continue our efforts in this respect to achieve even better results in the future. 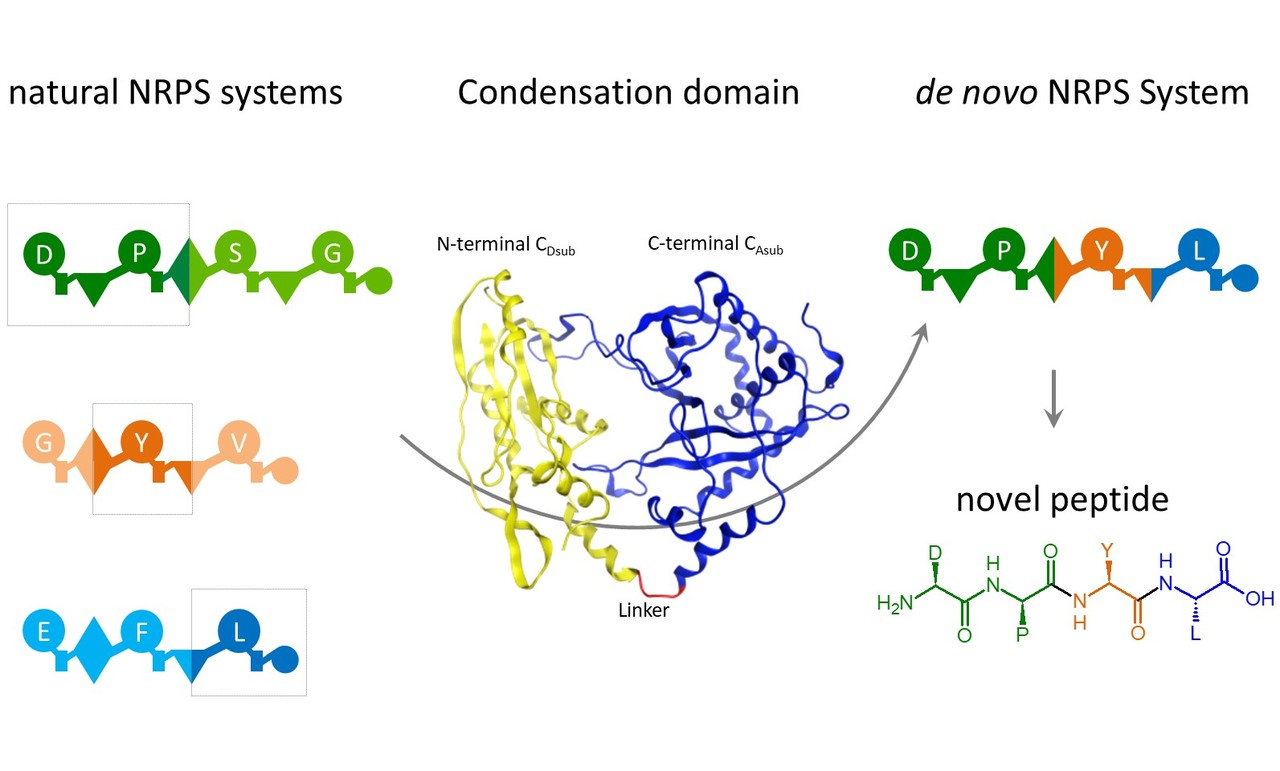 Peptides derived from microbial NRPS systems play an important role for our society since many of them are used clinically against different diseases. NRPS generate these peptides in an assembly line like fashion due to a modular and multifunctional enzyme function. Their efficient manipulation in order to change the peptide structure was always desired and has been achieved now in an efficient way using newly identified assembly points in these giant enzyme systems.