This work, elaborated by the University of the Basque Country (UPV/EHU, Spain), the Institute of Chemical Research of Catalonia (ICIQ, Spain) and RTI International (North Carolina, USA), shows a more sustainable alternative for the production of 1-butene from ethylene using metal–organic frameworks (MOFs). Precise engineering of defects transforms MOFs into selective heterogeneous catalysts for ethylene dimerization without activators or solvents. The research opens new avenues to develop robust heterogeneous catalysts for a wide variety of gas-phase reactions.

Video edition by Ignacio Luz, narration by Jacob T. Lail, text by Iker Aguirrezabal, and illustration by Manuel A. Ortuño. Image of industry designed by Freepik.

The production of 1-butene via ethylene dimerization is one of the few industrial processes that employs homogeneous catalysis due to their high selectivity, despite the massive amounts of activators and solvents required. This work demonstrates that tailored MOFs under condensation regimes catalyze the ethylene dimerization to 1-butene with high selectivity and stability at high ethylene pressures and mild temperatures.

How active hydride species are formed from defects

The researchers have engineered defects in the MOF (Ru)HKUST-1 without compromising the framework structure via two strategies: a conventional ligand exchange approach and a pioneering post-synthetic thermal approach. This innovative approach avoids the use of ligands and provides a more straightforward method for generating defects within MOFs. The in-situ evolution of defects and Ru-H species allows to optimize catalytic reactivity.

The experimental evidences have also been evaluated by theory. The researchers were able to simulate realistic MOF systems to characterize the defects and compute the reaction mechanism. They found that unsaturated metal centers induced by defects drive the activity, while the bimetallic nature of the node controls the selectivity. After testing the catalytic performance of the system, they next improved the recyclability and robustness of the catalyst through one crucial reaction condition: intrapore condensation.

Production of 1-butene via ethylene dimerization occurs in gas phase. When the reaction happens at low reactant pressure, active catalytic sites get deactivated due to the coordination of oligomers. But as pressure increases, the reactant molecules can condense inside the pores of the material. Such concentration effect avoids deactivation, significantly enhancing the stability of the catalyst.

The next steps of the project would involve the use of MOF catalysts based on first-row transition metals as well as the application of the novel intrapore condensation strategy to other gas-phase reactions. These approaches aim to bridge the gap between homogeneous and heterogeneous catalysis, and achieve the kinetic benefits provided by gaseous reactants at high temperatures and solvation within liquid-environments.

To learn more about this work, please check out our article "Gas reactions under intrapore condensation regime within tailored Metal–Organic Framework catalysts" https://doi.org/10.1038/s41467-019-10013-6 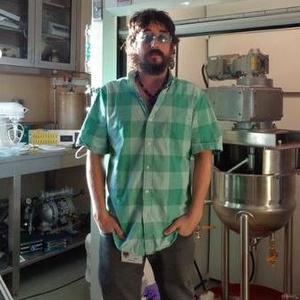