Resonance ionization spectroscopy of nobelium (atomic number 102) reveals its ground-state transition and an upper limit for its ionization potential, paving the way to characterizing even heavier elements via optical spectroscopy.

Research on superheavy elements regularly attracts widespread attention in particular when “new” elements are discovered. Although there are no practical applications for these elusive elements today, their research enables probing the limit of nuclear existence and provides an intriguing glimpse of how atoms and their nuclei work. In our experiments, we focus on elucidating the atomic and nuclear properties of these elements by means of optical spectroscopy. Since they do not occur on earth, their investigation is easier said than done, however. It can therefore happen that a single experiment takes more than 14 years, from preparation to first successful implementation, like our investigations on the synthetic element nobelium, ranked 102 in the Periodic Table.

We have had to break with the tradition of utilizing weighable sample amounts, when nearly nothing is known about the atom’s structure, as the production yield is only about one atom per second. In addition, we were practically blind when searching for optical transitions. The measurements would have been even more difficult to do without theoretical support, which substantially helped in narrowing down the spectral range of interest. As if this was not already complicated enough, the atoms are unstable and they vanish within seconds. We had to produce and prepare nobelium in its atomic ground state, and subsequently probe optical transitions utilizing a multitude of laser beams of different colors in thousands of single measurements. In these, we exploited laser resonance ionization to excite the loosely bound valence electron in two simultaneous excitation steps until the neutral atom is ionized. It becomes clear that localizing the ground-state transition is the bottleneck in our experiments and when this step is done, the work “really” begins. All the greater was the joy when, after so many years, the resonance signal was recorded, making our measurements the first of their kind in the region of the transfermium elements.

To learn more details about this experimental breakthrough, please read our Nature article entitled “Atom-at-a-time laser resonance ionization spectroscopy of nobelium”, http://doi.org/10.1038/nature19345. In June of 2018, we published two Physical Review Letters, in which we separately address the atomic physics and nuclear physics related to the experiments on nobelium as these lie at the borderline of both research fields. The papers can be found under the following URLs: https://doi.org/10.1103/PhysRevLett.120.263003 and https://doi.org/10.1103/PhysRevLett.120.232503.

Worth mentioning here is the extremely challenging work, which we conducted to locate the high-lying Rydberg states of the element. The experience from the initial level search taught us, once more, that patience is the most important ingredient for success. Indeed, after more than 400 hours of scans we were able to obtain a complete picture of the observed atomic levels and to extract the ionization potential, one of the most important atomic properties governing an element’s chemical behavior.

The interior of the optical cell used for nobelium laser spectroscopy.
The setup enables an efficient preparation of the sampled atoms for
subsequent laser probing. © M. Laatiaoui, JGU

Currently we are pursuing laser spectroscopy of the next heavier element, lawrencium, to determine the element’s electron configuration, atomic levels, nuclear spin, size and shape. We thereby push the optical spectroscopy frontiers to the extreme limits of nuclear stability, providing powerful benchmarks for atomic model calculations and anchor points for nuclear models that are presently applied to pinpoint the fabled “island of stability” of superheavy elements. 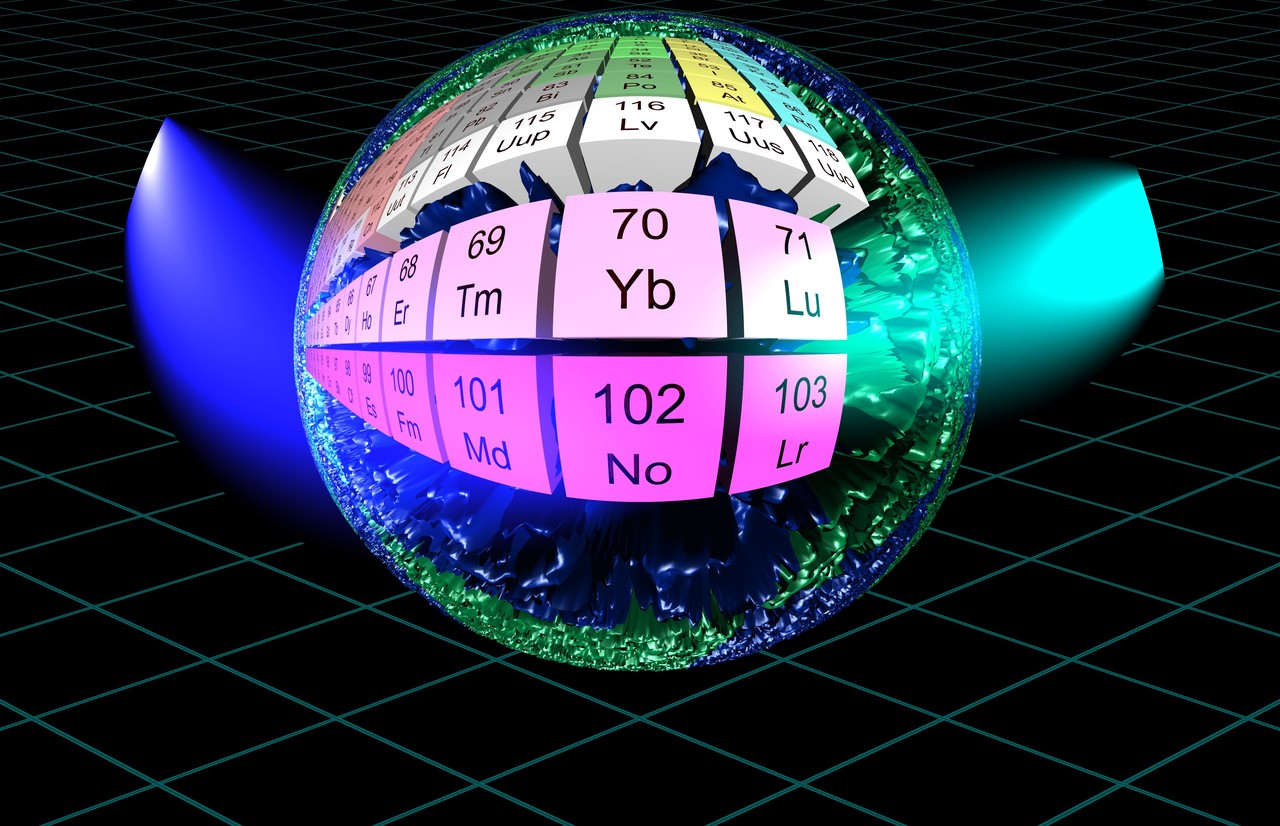 First stepping-stones towards optical spectroscopy of the superheavy elements.