This the story behind the paper "Insights into Real-Time Chemical Processes in a Calcium Sensor Protein- Directed Dynamic Library".
Ruth Pérez Fernández
Scientist, CSIC
Follow
Liked by Ruth Milne and 1 other

Dynamic combinatorial chemistry (DCC) is instrumental in the discovery of ligands for pharmaceutical targets. Here, the authors adapted DCC to work at 4 degrees Celsius and used it to identify a ligand for Neuronal Calcium Sensor-1 that promotes NCS-1/Ric8a protein-protein interaction.

This paper started with the idea of speeding up the modulators’ discovery of protein targets using Dynamic Combinatorial Chemistry (DCC), that is, reversible exchange chemistry under thermodynamic control or dynamic self-assembling and self-correcting systems. However, the exchange chemistries typically take place under specific reaction conditions, with limited tools capable of operating under physiological parameters. Having recently moved from a Medicinal Chemistry Institute to a Biological research center, it looked natural to me to start doing chemistry under physiological conditions using proteins as biological templates. From the extensive pool of available proteins I decided to work with the Neuronal Calcium Sensor 1, a protein that regulates synaptogenesis, synaptic transmission and is critical for learning and memory. Besides of its relevant biological role, one of the reasons I chose this particular protein was its involvement in a rare disease known as Fragile X syndrome. Considering that the synapsis is abnormally increased in this disease, the goal was to look for molecules able to decrease the synapse.

One of the first challenges we faced was the design of the chemistry system at low temperatures to keep our protein stable during the exchange process. We needed to look for a way of speeding the self-assembling and self-correcting process keeping it reversible. We finally found a small molecule that acted as a catalyst of the exchange chemistry at 4 ºC. In addition, we were able as well of to study that exchange in real time using ultrafast-NMR technique (UF-NMR) and the system in the presence of the protein using several NMR techniques.

At this point,we were sure we had found modulators of NCS-1 and we decided to test them in a Co-Immunoprecipitation assay expecting them to inhibit the interaction with the guanine exchange factor Ric8a. The inhibition in this interaction would lead to the decrease of the synapse, our final objective.

The results could not be more disappointing; the Western Blot band, which was supposed to disappear, was extremely intense. At that time, we did not have any scientific explanation for those results because they had never been reported before. The experiment was repeated several times by different people, different reagents and in different labs. We did everything we could to discard an error performing the experiment, but the results showed the same intense band, as if the molecule was promoting the interaction between NCS-1 and Ric-8a acting as an enhancer instead of an inhibitor. The X-ray structure was resolved shedding light into the compound's mechanism of action. The possibility of having found an enhancer of the NCS-1/Ric8a interaction with the possibility of restoring synaptic loss with a clear therapeutic application started to become a possibility. We looked for the correct disease model, a Drosophila model of Alzheimer's disease (AD) to perform the in vivo proof-of-concept observing that the pathological phenotype of AD was largely suppressed and the locomotor deficit activity recovered. 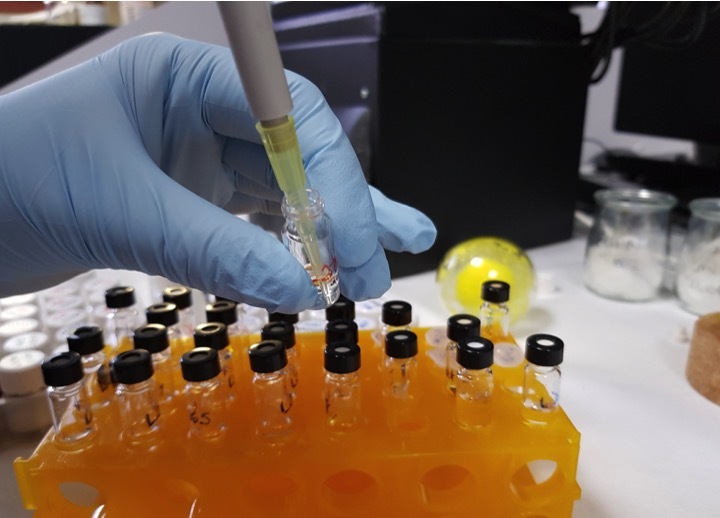 This the story behind the paper "Insights into Real-Time Chemical Processes in a Calcium Sensor Protein- Directed Dynamic Library".