Secondary-sphere interactions serve a fundamental role in controlling the reactivity and selectivity of organometallic and enzyme catalysts, but their study in organocatalytic systems is scarce. Now, it has been shown that the in situ secondary-sphere modification of organocatalysts combined with ma…

As a new group, we started building up our lab in October 2015. I was the first graduate student in the lab together with one postdoc, Dhayalan Vasudevan. In addition to setting up the lab, we had an idea that we wanted to test, which later evolved to become this project. Based on the assumption that the activity of organocatalysts is affected by perturbations to the catalyst structure, we thought that by binding molecular modifiers to an organocatalyst during the reaction we might tune its activity. We hoped that this concept would be of benefit to the asymmetric organic synthesis field as this strategy involves less synthetic effort to prepare diverse catalyst structures. In addition, enhancing catalyst libraries in this manner would perhaps extend the potential substrate scope of a reaction. Beyond these general advantages, our research group is interested in applying statistical methods to understand and optimize reactions, therefore, having access to larger catalyst libraries was a particularly important aim for us. We targeted boronic acids (BAs) to be candidates as molecular modifiers due to their abundance and wide use in organic chemistry, also, BAs would bind to hydroxy groups on catalysts which will enable us to tune the activity of the catalyst. As proof of concept, we surveyed the literature for an organocatalytic system in which the catalyst has a hydroxy group near the active site and was thought to involve hydrogen bonding to control the selectivity. We found that Connon, Zeitler and coworkers had reported an N-heterocyclic carbene (See figure 1, Cat5F) that catalyzed benzoin condensations and fit the above requirements.1

We started this project by synthesizing Cat5F, however, the procedure wasn’t trivial, especially for a first-year grad student. In addition, when we started off, our lab was not yet equipped with Schlenk lines, vacuum pumps, rotarvaps and other essential tools and instruments needed for organic synthesis. Luckily, we at least had the departmental NMR facility and could rely on the kindness of other groups for the required equipment! After months of hard work, and with Dhayalan’s crucial contributions, we were ultimately able to increase the yield reported for preparing this catalyst from 31% to 65% and were in good shape to start conducting catalytic reactions.2

Half a year, 4 Schlenk lines, and one rotavap later, we finally had the purified catalyst in hand and started conducting preliminary catalytic experiments. Naively, we thought that we finally reached the easy part of the project! The first experiment we did was just adding boronic acid under the exact conditions of Connon, Zeitler and coworkers’ report. This simple modification increased the enantiomeric excess (ee) of the substituted benzoin from 67% to 94%. We were excited that our new concept of in-situ dynamic covalent binding seemed to work. We then tested whether we could get different enantioselectivity outcomes using different BAs, this would be critical for our ability to apply statistical analysis to these results. The results indicated an influence of the BA structure on the reaction outcomes at 24-hour reactions. We sent the results to Anat by text message as she was at the Stereochemistry Gordon conference presenting this work at the time. Motivated by these preliminary results, we started a journey which entailed setting the reaction up in different orders of addition, with different precautions, optimizing the conditions, and testing different quenching methods. We also ran many control experiments to understand the role of each reaction component.

One of the control experiments involved following the conversion and enantioselectivity of the reaction over time. Once we found that the reaction was finished after 6 hours, we decided to set a deadline of one week to test the effect of different substituted BAs on selectivity. At this point and due to the ever-increasing particularities of this project, Santosh Gadekar, a new postdoc in our group joined the team (a very wise decision!). The results were unexpected because as opposed to the 24-hour results, at 6 hours all the BAs were associated with excellent enantiomeric excess values. These results were a little frustrating because, unlike many labs in the world that perform reaction optimizations to ultimately reach maximum selectivity, we actually hoped for some “poor results” when using different BAs. Our ultimate aim was to tune the enantioselectivity by modifying the structural features of BAs. Specifically, we wanted to have a broad spread of results to gain mechanistic insight on the structural features that lead to increased enantioselectivity. This could be achieved by mathematical correlation of the relevant structural features with the obtained enantioselectivity. But as all of the selectivity values were similar, we were at an impasse. We decided this would be a good time to apply the reaction to additional substrates, because it is possible to study the mechanism by changes to the substrate structure and we needed a wider scope anyway. There weren’t many literature examples of benzoin reactions using electron withdrawing groups, so we thought this would be appropriately challenging. Based on the reaction scope it was clear that the increase in enantioselectivity we saw with BAs was general. And we could now finally apply our mathematical correlation strategy by seeking molecular parameters that describe substrate structural features and developing a multivariate model that predicts the enantioselectivity of different benzoins.

Following the investigation of the structural effect of aldehydes on reaction selectivity we returned to the core question of the project, how is BA affecting the enantioselectivity? To answer this question, we went back to 24-hour reactions where we saw an effect of the structure of BA on the enantioselectivity. From the results we built a decision tree which described how different BA features could determine the selectivity in the case of the 24-hour reactions. This flow chart classifies BAs based on their structural features and enabled us to identify specific BAs which result in high enantioselectivity values. Moreover, using this analysis we were able to perform an optimization at low catalyst loading of gram-scale reactions within one week. Our initial hypothesis was that binding between the BA and catalyst would modify the non-covalent interactions stabilizing key intermediates and transition states in the catalytic cycle. We anticipated that further stabilization by BAs of an aldehyde that is already known to form stable adducts with NHC catalysts3 may allow us to detect such intermediates by mass spectrometry. Indeed, despite the elusive nature of reactive intermediates, we were able to detect a species that is in agreement with the mass of an acyl anion intermediate bound to BA.

We are currently conducting Kinetic studies and DFT calculations to further investigate the mechanism of these condensations. 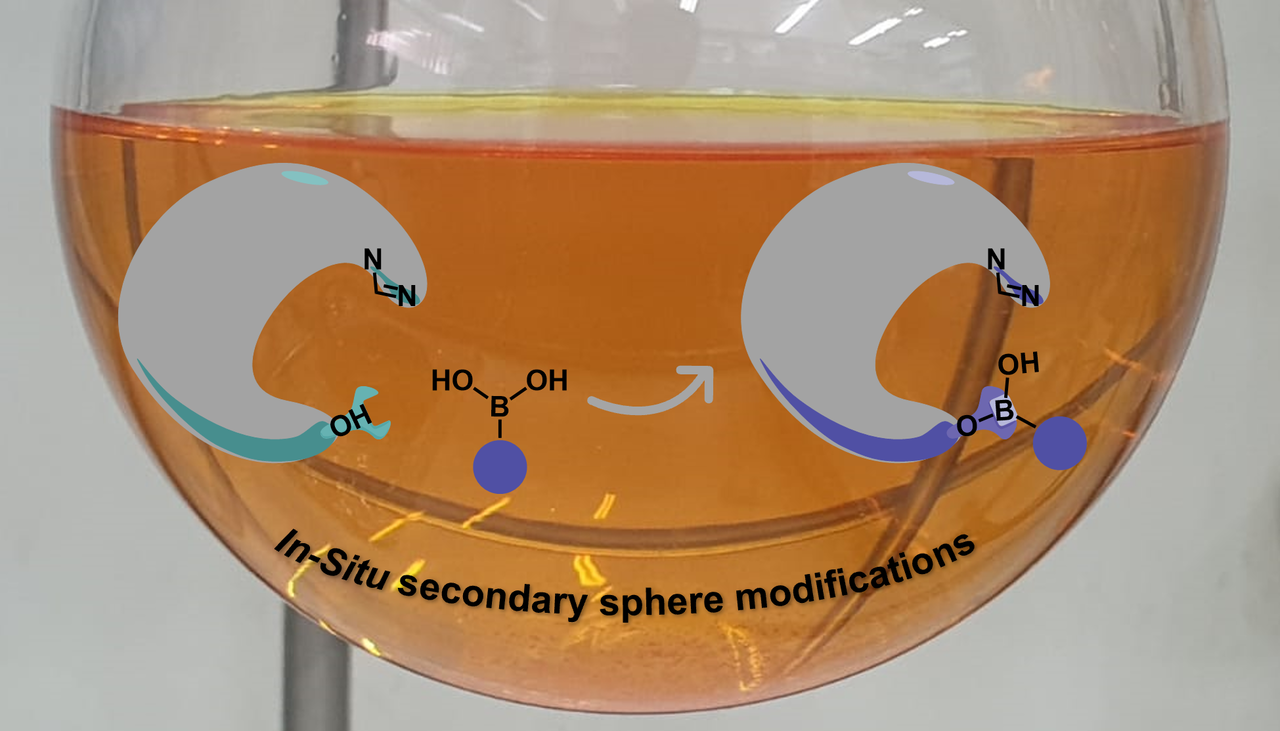