Steve Liddle
Professor and Head of Inorganic Chemistry, The University of Manchester
Follow
Like Liked by Ruth Milne and 1 other
0

The nature of actinide–ligand bonding is attracting attention, in particular in the context of nuclear waste separations. Structurally authenticated one-, two- and threefold uranium–arsenic bonding interactions are now reported. Computational analysis suggests the presence of polarized σ2, σ2π2, and…

In 2015 the Liddle Research Group, in collaboration with the Scheer Research Group at Regensburg University, published a paper entitled “Triamidoamine uranium(IV)-arsenic complexes containing one-, two- and threefold U-As bonding interactions” in Nature Chemistry. As part of the IUPAC International Year of the Periodic Table celebrations, Nature Research have published an interactive periodic table, and our paper features on the arsenic page along with two other papers on the uranium and thorium pages. It seems, therefore, an appropriate time to reflect on how that all came to pass and what has happened since.

I first met Manfred Scheer by utter chance at the RSC Coordination Chemistry Discussion Group meeting in Leeds in 2009. I found myself fascinated by the many research strands that Manfred does, but only two years into an independent academic career my uranium research was only just getting going, so I made a mental note for later of the gorgeous sorts of main group molecules his group make. Little did I know at the time how important that chance meeting would become.

Fast forward to 2013 and having just published “Isolation and characterisation of a uranium(VI)-nitride triple bond” in Nature Chemistry I was thinking about how to work down the Group 15 elements to make uranium-element linkages that have no right to exist, and those gorgeous main group molecules came back to the fore of my mind.

So I contacted Manfred, and after a few emails it became clear that his research interests aligned with ours since he had used triamidoamine (Tren) ligands to stabilise tungsten-antimony multiple bonds, for example “Antimony-Tungsten Triple Bond – A Stable Complex with a Terminal Sb Ligand” published in Angewandte Chemie in 2005. Not long after, a parcel, from Manfred’s right-hand man Gábor Balázs, containing some sodium phosphanide arrived from Regensburg and Ben Gardner, a talented postdoc in my group, set to work and soon we had made and characterised a parent uranium-phosphinidene, which we published in Angewandte Chemie in 2014 in a paper entitled “Triamidoamine-Uranium(IV)-Stabilized Terminal Parent Phosphide and Phosphinidene Complexes”. We naturally wanted to move to arsenic and so soon another parcel from Gábor containing potassium arsanide arrived and Ben set to work using that too. The result was a family of uranium-arsenic complexes published in the paper mentioned in the introduction and summarised in the figure below.

Synthetic chemistry can be a bit challenging sometimes, but we were having lots of fun working out how to make novel uranium-element linkages, and then with them isolated learning about their structure, properties, and reactivity. So parcels started arriving from Regensburg on a frequent basis, and members of the group would be excited as another parcel arrived, crowding around like someone was opening a Christmas present to see what goodies were in the box this time.

Of course not everything works in exploratory synthetic chemistry, but pleasingly most of our ideas have worked and so our library of compounds continues to expand. As is often the case in research we have found the chemistry spinning off into directions no one could ever have predicted. However, that can often be at least as interesting, if not more so, than original aims, and we all know that serendipity can be a friend in science it’s just up to us to recognise the value and implications of surprise results.

The phosphorus and arsenic work above challenged us to go back to nitrogen, resulting in “Synthesis and Characterization of an f-Block Terminal Parent Imido [U=NH] Complex: A Masked Uranium(IV)-Nitride” published in Journal of the American Chemical Society, and then continue the work with heavier Group 15 elements with “An Inverted Sandwich Diuranium μ-η5:η5-Cyclo-P5 Complex Supported by U-P5 δ-Bonding”, “Isolation of Elusive HAsAsH in a Crystalline Diuranium(IV) Complex”, “Terminal Parent Phosphanide and Phosphinidene Complexes of Zirconium(IV)”, “Crystalline Diuranium-Phosphinidiide and -m-Phosphido Complexes with Symmetric and Asymmetric UPU Cores”, “Actinide-Pnictide (An-Pn) Bonds Spanning Non-Metal, Metalloid, and Metal Combinations (An = U, Th; Pn = P, As, Sb, Bi)”, and “Trapping of a Highly Bent and Reduced Form of 2-Phosphaethynolate in a Mixed-Valence Diuranium-Triamidoamine Complex”  papers published in Angewandte Chemie up to this year.

We’ve long believed that to get to the level of understanding of actinides that we need to have we have to make comparisons across the actinide series. So, with Regensburg we’ve pleasingly been able to transfer some of the above chemistry to thorium resulting in “Thorium-Phosphorus Triamidoamine Complexes Containing Th-P Single- and Multiple-Bond Interactions” and “Triamidoamine Thorium-Arsenic Complexes with Parent Arsenide, Arsinidiide and Arsenido Structural Motifs” papers being published in Nature Communications.

One point touched on above is that you learn as you go in science and sometimes what you learn in one area moulds your thinking in another even if that is not obvious from the resulting publications nor the original direction you intended to go in. Two examples of that are that in the past year or so we’ve reported two papers detailing dinitrogen reduction and conversion to ammonia at titanium in “Catalytic Dinitrogen Reduction to Ammonia at a Triamidoamine-Titanium Complex” and “Bimetallic Cooperative Cleavage of Dinitrogen to Nitride and Tandem Frustrated Lewis Pair Hydrogenation to Ammonia” in Angewandte Chemie. Apart from the use of a Tren ligand, variants of which underpin a lot of our chemistry, there isn’t an obvious link from uranium-element multiple bonds to titanium-mediated dinitrogen reduction to ammonia! But lots of lessons learned along the way in the former helped us develop the latter. Things can come full circle too, so the dinitrogen reduction has got us thinking about things back with uranium, and so the story develops.

So, a decade later after a chance meeting we have a prosperous collaboration and friendship with colleagues at Regensburg. Some of us have visited Regensburg and Gábor has visited our group to do some synthesis at our end, not to mention the joint papers that have emerged from our two labs in different countries working together towards common goals. Never has the spirit of collaboration across borders been so important, and we hope that this can continue to be the case in the future.

So where next? Well, the Scheer group continue to make novel and unusual compounds that beg to be introduced to uranium, and as alluded to above stepping into transuranic chemistry is something we’ve done already, and hopefully we’ll see the fruits of that work published in the months to come - so watch this space! 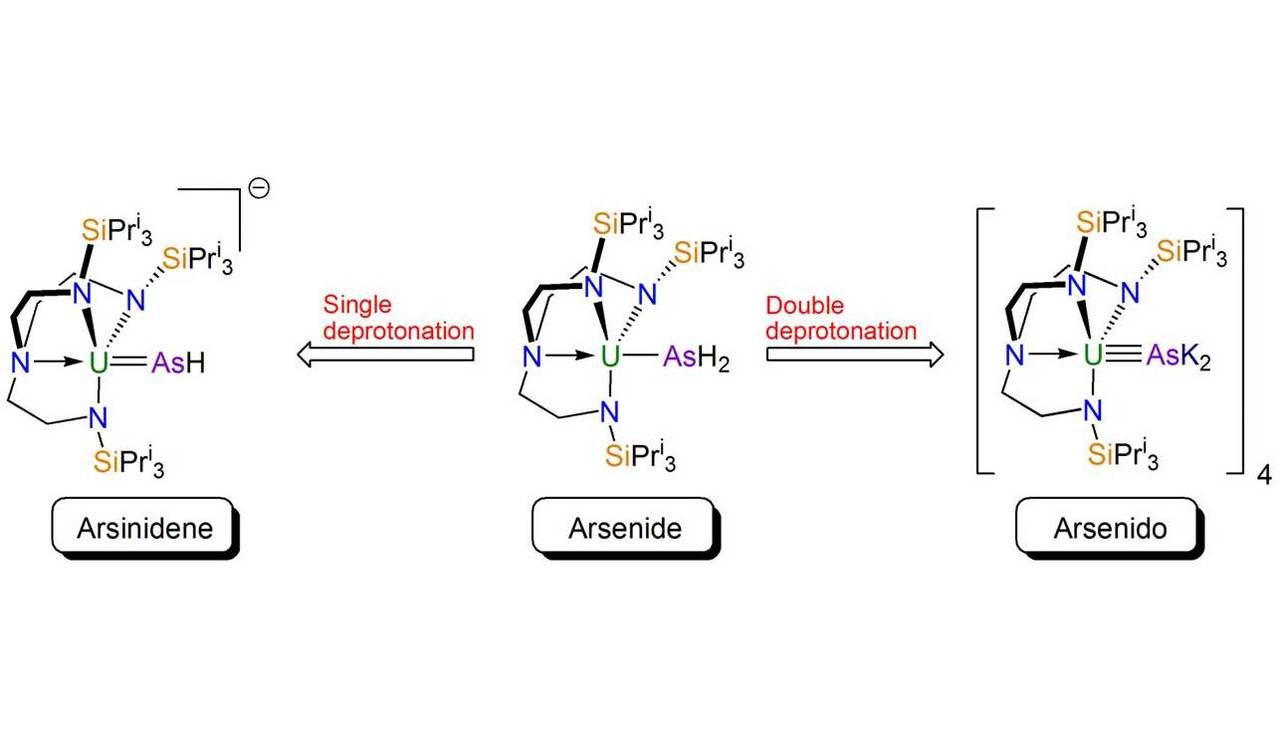