Solutions of proteins and other molecules can host puzzling, solute-rich inclusions of mesoscopic dimensions. Here the authors report a mechanism by which mesoscopic clusters can nucleate and ripen, requiring that the solute form long-lived complexes, with implications for biologically and industria…

The story began in 2006, when my colleague Peter Vekilov from Chemical Engineering told me about his mesoscopic clusters. The clusters are tiny droplets of what appears to be a protein-rich liquid, floating around in a less concentrated protein solution. Sized at under a micron and containing a small fraction of the protein (< 0.1%), the clusters can’t be seen using conventional optics, but are revealed by more advanced microscopies. Individual clusters have been observed by atomic force microscopy to land on the surface of a protein crystal and are clearly seen by TEM in flash-frozen samples. The bulk nature of the clusters has been confirmed by dynamic light scattering and oblique illumination microscopy. The former technique reveals a steady ensemble of freely diffusing objects—in a freshly prepared and purified solution!—that are about a hundred times larger than an individual protein molecule. The oblique illumination microscopy, on the other hand, allows one to directly monitor the Brownian motion of these objects. The mesoscopic clusters have been seen in solutions of many proteins, including lysozyme, hemoglobin, and lumazine synthase; and now also in solutions of other molecules such as the antipsychotic drug olanzapine. Though relatively small in number, the mesoscopic clusters pack a punch: They serve as essential nucleation centers for things like sickle cell anemia fibers or protein crystals. The sickle cell fibers are the cause of a debilitating and painful disease, while making protein crystals remains to this day the most important tool for the structural biologist. Perhaps the clusters could be used to make industrial quantities of uniformly sized, soft particles. Controlling the formation of the mesoscopic clusters is clearly a worthwhile thing to pursue.

But how do the clusters come about in the first place? Laws of thermodynamics suggest the clusters really shouldn’t be there. First off recall that the protein-rich and protein-poor solutions, when coexisting in one cuvette, can be thought of as a liquid in equilibrium with its own vapor. A common example of such a liquid-vapor coexistence is morning fog, where macroscopically large droplets of liquid water are suspended in air while being surrounded by saturated water vapor. (To connect this example with the protein-solvent system, note the water molecules comprising the fog particles play the role of the protein inside the mesoscopic clusters while the air plays the role of the solvent.) Once the temperature rises, however, the fog will readily evaporate since the liquid water is now less stable than the vapor. Sure enough, the fog particles will continue to attempt to form even at this higher temperature but will readily disappear before they could reach a meaningful size. This is because the formation of the clusters is now an uphill process in terms of free energy, as illustrated in the schematic below, and so droplets made of an metastable phase will not stick around but, instead, slide back down the free energy slope very rapidly:

This process of emergence and subsequent disappearance of such droplets, often called “heterophase fluctuations” was discussed by Yakov Frenkel already in the 1930s. Now imagine the sun is out in full force, yet some of the fog stubbornly refuses to go away, even if shrunk to a sub-micron size! Much like in this improbable scenario, the mesoscopic clusters are seen at conditions where the protein-rich liquid would be less stable than the bulk solution. Their persistent presence would seem to indicate inability of the solution to come to equilibrium, in apparent contradiction with the 2nd law of thermodynamics, which demands the free energy be at its minimum in equilibrium. Sir Arthur Eddington, perhaps best known for his tests of Einstein’s theory of general relativity, famously stated: “…But if your theory is found to be against the second law of thermodynamics I can give you no hope; there is nothing for it but to collapse in deepest humiliation.”

Perhaps the system in not in true equilibrium and there is a slow process we don’t know about, mused Peter G. Wolynes in 2008. He also enlightened me then about the phenomenon of “domain swapping”, in which a protein molecule could partially unfold and temporarily bind to a matching portion on a different molecule, similarly to how one could mistake one’s own car for somebody else’s on a busy parking lot, if the cars are of the same make and color. The mistaken owner will eventually find out this is a wrong car and reunite with his/her own car, but only after some time has been spent recognizing the error. Peter’s notions of an additional hidden process—slow or not—and the possibility of binding between protein molecules turned out to be quite prescient.

Already the simplest reaction-diffusion scheme we wrote down as part of a 2010 article (Pan, Vekilov, and VL) suggested that if protein could form transient complexes with itself or another molecule from the buffer, the lifetime of the complex could provide a much needed new timescale in the problem. (Finite time scales do not ordinarily enter explicitly in thermodynamics, which operates on very very long times.) There, we proposed that if the protein-rich phase is rich in the complex, a cluster could span a distance the complex can travel before falling apart: R≈(Dτ)1/2, where D is the diffusivity of the complex and τ its lifetime. A lifetime of order a millisecond, a very reasonable number, would account for the mesoscopic size. One of the most welcome features of the complexation scenario is that it implies the cluster size would not be very sensitive to the protein concentration and properties of the buffer other than those that could strongly affect the protein charge thus potentially modifying how strongly two protein molecules could bind together; this is what Vekilov has consistently observed. The simple relation : R≈(Dτ)1/2, which could be guessed by dimensional analysis, came out of a set of two simple, 2nd order differential equations. Unfortunately, those simple equations literally blow up in the center of the putative cluster, while leaving the complexation scenario hanging in thin air.

Formulating defensible—and solvable!—equations, which would take care of thermodynamics and solute binding consistently, was endangered by the highly non-linear, saddle point region of the free energy surface. (This non-linearity is associated with the interface between the two co-existing phases.) To contain this issue, Ho-Yin Chan and I shrank the saddle-point region into a thin surface, which then forced us to find a way to “glue” solutions obtained in the individual phases. This seemingly formal task turned out to have physical ramifications; in tackling it we re-discovered an old, little-known expression for the local pressure in the presence of spherically symmetric heterophase fluctuations, due to none other than van der Waals. Van der Waals’s formula is essentially equivalent to the celebrated Landau-Ginzburg expansion but predates it by several decades! Actually, we established a generalization of van der Waals’s formula for liquid mixtures, non-uniform chemical potential, and arbitrary geometries. This is crucial because it turns out that in the presence of transient binding, the local chemical potential for the protein and its complex are spatially non-uniform even in steady state. As a result, a lot is going on at the cluster-solvent interface: There is an influx of the monomer from both the solution bulk and the cluster core. At the same time, protein departs from the interfacial region largely in the form of the dimer, the latter decaying as it diffuses along. This result in a transient, kinetic stabilization of droplets. A droplet will nucleate and grow only so large before it will decay, yet a steady ensemble of clusters will persist. As to the 2nd law, it is obeyed, after all.

I believe that not only are the mesoscopic clusters more ubiquitous than one might think, but that the now systematically demonstrated mechanism of mesoscopic aggregation may explain how liquid solutions of organic molecules could spontaneously compartmentalize without having to be encased in a chemically distinct membrane. An amphiphilic molecule could then collect at the droplet-solvent interface, and there you have a proto-cell. Who knows, perhaps a first living cell ultimately came about because of a good old romance between just two molecules, even if only evanescent? 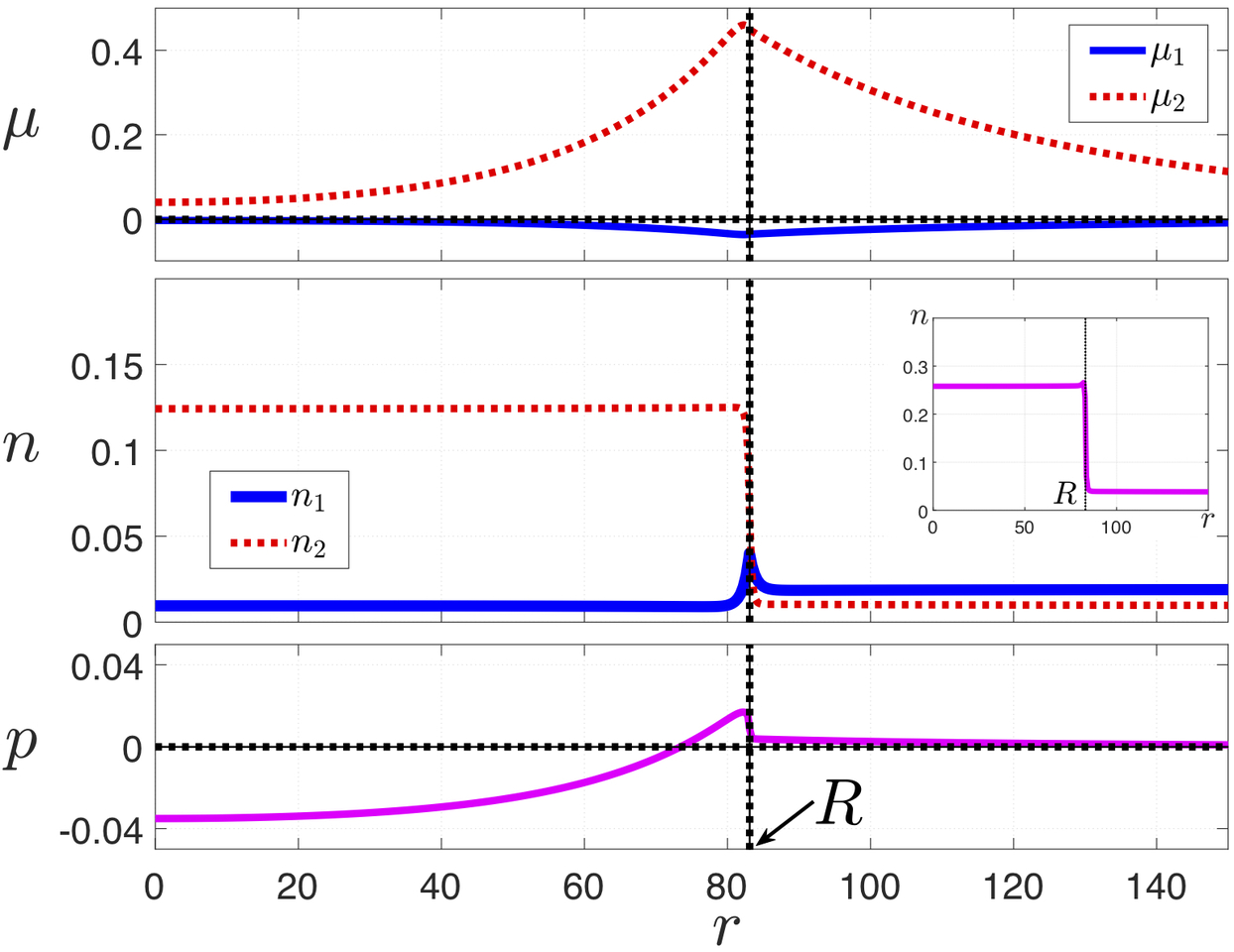