We have now found the ruthenium-catalysed oxidative conversion of ammonia into dinitrogen, electron, and proton under mild reaction conditions.
Yoshiaki Nishibayashi
Professor, The Unversity of Tokyo
Follow
Like Liked by Ben Johnson and 4 others
0

Recently, environmental threats such as global warming are getting serious concern. Therefore, for a sustainable society, the conversion from conventional energy such as fossil fuels to renewable energy such as solar and wind power is needed. However, the diffused renewable energy has some problems such as output instability or lower energy density. In recent years, the use of so-called energy carriers, which store and transport renewable energy in the form of chemical substances, has attracted attention. Ammonia (NH3) is one of the leading candidates of energy carriers because NH3 has many advantages: ease of handling, no carbon dioxide emission, and high energy density. In order to use NH3 as an energy carrier, not only a clean ammonia synthesis but also efficient decomposition of NH3 to dinitrogen (N2) which corresponds to energy extraction process is required. Ammonia oxidation, the conversion of NH3 into N2, electron and proton, is a promising reaction from the viewpoint of efficiency, because generated electron through this process is directly used as electricity, i.e. ammonia fuel cells.

Focusing on the similarity in structure and physical properties between NH3 and H2O, we envisaged that the ruthenium complexes known as water oxidation catalysts can be potential candidates to achieve the catalytic conversion of ammonia into dinitrogen. In water oxidations, cerium(IV) salts have usually been used as oxidants. At first, we carried out the reaction using cerium salts like water oxidation reactions, but no dinitrogen was generated at all. Then, we changed the oxidant from cerium(IV) salts to triarylaminium radicals which are capable of coexisting with bases. Thus, we found the catalytic ammonia oxidation reactions. The optimized reaction system is as follows: the reaction of ammonium trifluoromethane sulfonate (NH4OTf, 3.0 mmol) as an ammonia source, tris(4-bromophenyl)aminium hexachloroantimonate (2, 0.90 mmol) as an oxidant and 2,4,6-collidine (3.0 mmol) as a base in the presence of a catalytic amount of ruthenium catalyst (1a or 1b, 0.01 mmol) was carried out in acetonitrile.

This reaction proceeds quite rapidly, and nitrogen bubbles are immediately observed after injection of a base. After the reaction, the generated N2 was quantified by GC and up to 11.9 equiv. of N2 were observed based on the Ru atom of the catalyst.

We also confirmed the formation of some reactive intermediates such as mononuclear ammonia complexes, a bridging-nitride complex and a bridging-dinitrogen complex.

From the structure of these intermediates and the results of kinetic experiments, we have proposed a reaction pathway containing a bimetallic dimerization process of two ruthenium-nitride species. This reaction pathway was also supported by DFT calculations.

Surprisingly, the reaction was also carried out under electrochemical oxidation conditions. This result indicates the potential applicability of the present catalytic system in ammonia fuel cells in future.

For detailed information, see our article "Ruthenium-catalysed oxidative conversion of ammonia into dinitrogen" in Nature Chemistry[1].   The list of pictures of other authors (Nakajima, Toda, and Sakata) is as follows. 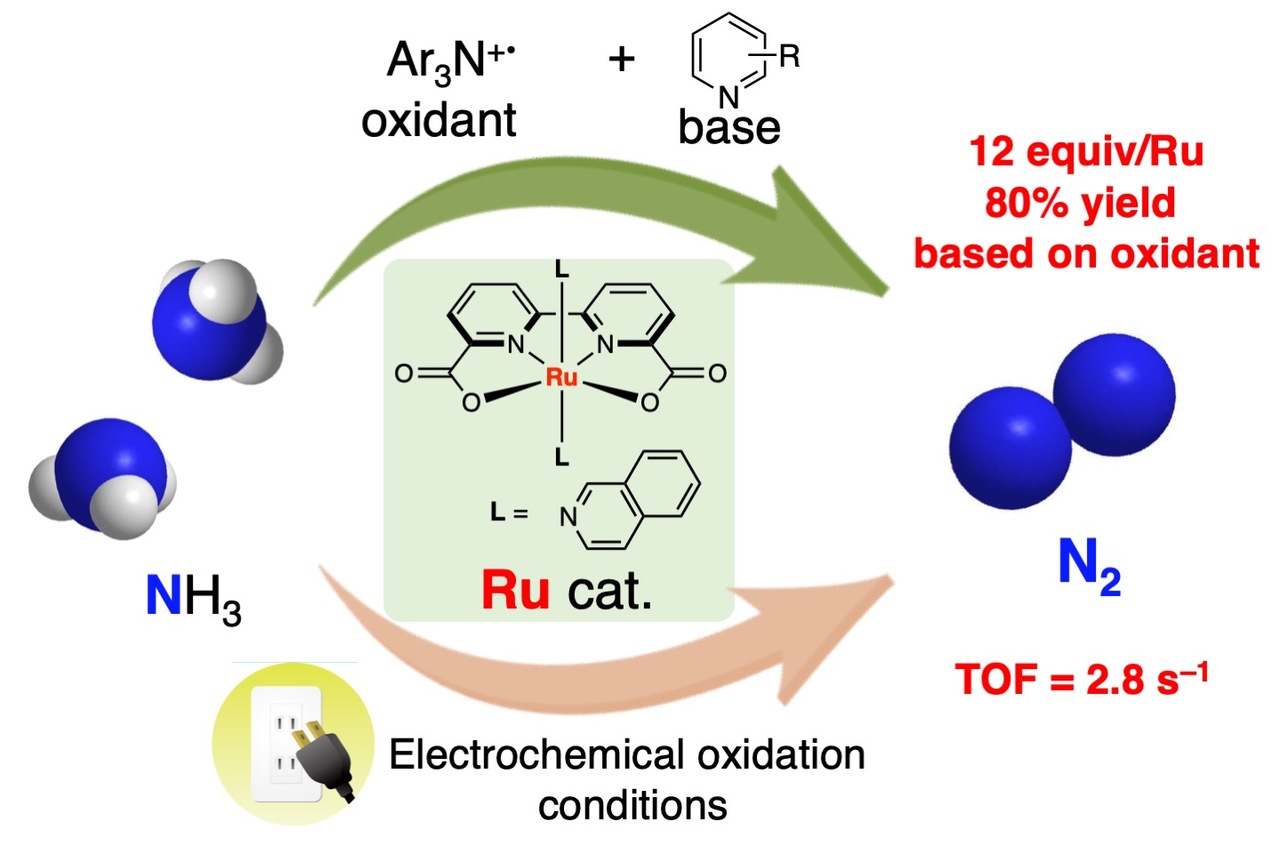 We have now found the ruthenium-catalysed oxidative conversion of ammonia into dinitrogen, electron, and proton under mild reaction conditions.