Studies into gold-catalysed cross-coupling reactions have expanded over recent decades; however, oxidative addition to gold(i) complexes remains challenging. Now it has been shown that a dual catalytic transformation involving iridium photosensitization to trigger oxidative addition to organogold in…

For more than two decades now, our group has been involved in the development of new radical reactions, focusing on new partners for radical cascades as well as designing more sustainable radical transformations1. We have notably devised new redox processes such as the oxidation of alkyl trifluoroborates2; and the photoredox catalyzed oxidation of alkyl bis-catecholato silicates, in order to generate alkyl radicals3. Concomitant to these advances, we have also been engaged in electrophilic organometallic catalysis by using platinum(II) and gold (I) complexes4. The common leitmotiv of these two approaches is to access to molecular complexity as readily as possible. Although there have been some scattered reports about the the interactions of organic radicals with gold complexes, it is really the works of Toste and Glorius which paved the way for important developments. In their seminal studies of 20135 and 20146 they showed that an aryl radical generated in photoredox catalysis conditions could add to a gold(I) species and lead to sp2-sp3 cross coupling adducts. The gold catalysis cycle and the photoredox cycle are connected by an electron exchange which allows the generation of a gold(III) intermediate which undergoes rapid reductive elimination. Put another way, the photoredox cycle allows oxidative addition at gold(I), a process notoriously difficult to achieve7. With my colleagues Virginie Mouriès-Mansuy and Cyril Ollivier, we could check the versality of this approach and we devised an arylative cyclization of o-alkynylphenols with aryldiazonium salts via dual photoredox/gold catalysis leading to benzofuran derivatives8. Because of the richness of the chemistry of alkynes, we wished to develop the corresponding alkynylative cyclization which meant a Csp2-Csp cross coupling process. The challenge was two fold: first, the reduction of alkynyl iodides (E  ≈ - 1.4 V ) is much more difficult than the reduction of aryldiazoniums (E ≈ - 0.2 V); second, alkynyl radicals are virtually unknown species. Not so surprisingly, the classical conditions of the arylative reaction were not productive. Therefore, when preliminary conditions were found by the PhD student, Zhonghua Xia and confirmed by Dr. Vincent Corcé, to provide the expected alkynyl benzofurans (characterized by MS by Cédric Przybylski and by XRD by Jérémy Forté), the determination of the involved mechanism became a burning question! All parameters were investigated and it appeared that the presence of light, of a base and of the chloro[tris(para-trifluoromethylphenyl)phosphine]gold(I) were essential for the reaction to work. The idea of an energy transfer9,10,11 promoted oxidative addition of the alkynyl iodide onto gold(I) emerged and not a photoredox as previously observed. More precisely a blue LED excited iridium(III) photocatalyst sensitizes a vinylgold(I) intermediate which in its triplet state reacts with the alkynyl iodide partner.

Collaboration with the photochemistry group of Ludovic Jullien at Ecole Normale Supérieure, featuring Agathe Espagne and Thomas Le Saux, confirmed the interaction between the excited photocatalyst and the vinylgold intermediate through fluorescence quenching studies as well transient absortion spectroscopy. The DFT calculations by Héloïse Dossmann and Yves Gimbert brought essential support to this very unprecedented type of mechanism, notably by modeling the triplet state of the vinylgold(I) intermediate and its interaction with the alkynyl iodide.

Scope of the reaction could be enlarged notably by Fen Zhao (PhD student) to other nucleophiles (arylgold and o-alkynyl-NTs-anilines) and other electrophiles (vinyl iodides). This work12 opens some important new opportunities in cross coupling reactions involving gold nucleophilic partners. 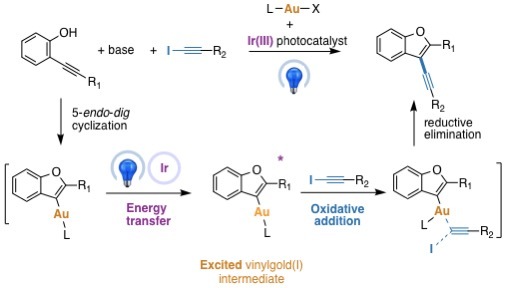