Despite their prevalence in nature, protein engineers tend to focus on monomers. We show oligomerisation can be useful and can be considered as an alternative route to construct proteins with useful emergent properties.

Subliminally, it probably all started back during my PhD. Under the supervision of the late, Richard Perham at Cambridge, I started using in anger two approaches that still act as the backbone of my research today: protein engineering and structural biology. The protein I worked on was the lipoic acid binding domain of the key metabolic mega-enzyme complex, pyruvate dehydrogenase. Two major parts of my project I now see as key to our current paper – the need for new chemistry not present in the amino acid sequence [the lipoic acid cofactor] and the importance of weak protein-protein interactions for specificity and function. As well as understanding the fundamentals of this enzyme complex, a key driver for me was to make my lipoic acid binding domain do something it did not normally do – function with something it did not normally work with. So, the seeds were sown.

This idea of making proteins do something they didn’t normally do proved to be a philosophy I embraced for the rest of my research career. After my PhD, I moved down the road to the Chemistry Department at Cambridge working with Paul Barker on making a small haem-binding protein do new and funky things. One day, I decided to split our new funky protein down the middle to generate two “monomeric” components. We found we could dictate protein self-assembly through the use of defined inputs.

On starting my independent career, I kept with the ethos of “let’s make proteins do new and funky things”. One of the first things was to invent an approach for sampling non-standard mutational events by directed evolution, including “domain insertion” whereby one protein is inserted into the other. We found we could now couple the activities of very different proteins through this process. This included GFP, which quickly became a favourite protein for my students to work on – who doesn’t like a coloured protein that makes your bugs glow! Then in 2007 Eric Tippmann arrived in Cardiff bringing with him Peter Schultz’s non-canonical amino acid incorporation system. This proved to be a pivotal point as I had always thought what wonderful new things we could do if right chemistry was present in a protein. Initially, I wanted to combine the expanded genetic approach with my directed evolution method. Eric convinced me that we could use phenyl azide chemistry in new and interesting contexts through standard protein engineering approaches. I am glad he convinced me as phenyl azide chemistry has become an important route to “making proteins do new things” through the use of light and Click chemistry. The latter has proved most useful as we have used it to attach small molecules to control protein function, attach DNA to address proteins to their required positions on DNA origami tiles and generate bespoke 1:1 protein-carbon nanotube interfaces.

The one thing at that point we hadn’t tried was linking one protein to another, which seems obvious in hindsight given that most proteins in nature exist as oligomers with homodimers being the most common! I gave this challenge initially to an undergraduate placement student, Jacob Pope. We needed a 2nd non-canonical amino acid to link our two proteins together. Luckily the Lemke group had just developed a strained cyclic alkyne incorporation system which they generously supplied to us. We first started with GFP dimers and decided to use a surface exposed loop far from the chromophore just to be safe – no dimerisation! That same residue could Click to DNA and CNTs but not another protein! We then chose a residue closer to the active site – a partially buried residue. Dimerisation was successful! At this point we decided to try and predict dimerisation potential through in silico docking, a challenge undertaken by Harley Worthy, a PhD student in the lab. This proved to be important as we could identify mutually compatible surfaces and we have since used it to identify residue positions to link together totally different proteins.

On generating our fluorescent protein dimers, it became clear quickly that dimerisation was having a largely positive effect. They were better overall than their monomeric starting points and we could even switch them on by changing bond interaction networks. The structure of one of the dimers revealed something quite unexpected. Harley was a fan of CAVER, a piece of software that can find channels in a protein – he found a channel between the two chromophores. At the same time, I was looking at the interface the old fashioned way. What we both found that there was an organised water network linking the two proteins. Water is considered something that proteins need to fold in and try to remove it from their core. GFP has a lot of internal water molecules, with many contributing to fluorescence in some shape or form. So, we postulated that this new water network plays an important role in defining the function. Husam a PhD student from Iraq then went on to build the heterodimers so generating some new and interesting spectral features including what appears to be an “integrated” dimer whereby a new single emission spectra is observed.

I believe that GFP and other fluorescent proteins are excellent light induced charge transfer devices and so have huge potential beyond biology in areas such as molecular electronics. Who knows, maybe GFP and its engineered cousins could be components in your next smart phone or tablet? 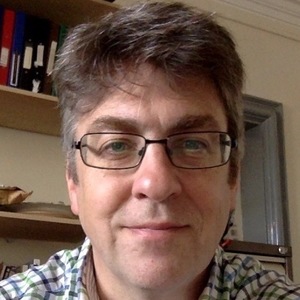