Encapsulation is an effective strategy to tune metal-catalysed reactions, although its potential has not been fully explored. Here, design principles and advanced understanding of the reactivity of different polymer-encapsulated Pd nanocrystals are provided using CO oxidation as a benchmark reaction…

Enzymes are well known to be highly effective biological catalysts offering high selectivity towards desired chemical products.  As such, many research groups have focused their efforts both on studying the precise mechanism by which enzymes operate and by trying to replicate their activity.

Two important aspects learned from enzymatic chemistry are the influence over the catalytic transition state and the control of diffusion of reactants and products to and from the active site.  There have been many steps forward in catalyst design by mimicking the precise active site structure of useful enzymes and applying it to heterogeneous systems.  In our work we try to mimic these aspects of enzymes through bulk changes to a heterogeneous catalyst system rather than the traditional approach of mimicking the active site directly in a crystalline material.

We use materials exposing extended metal facets like in traditional heterogeneous catalysts (palladium nanoparticles) but encapsulate them inside layers of microporous polymers (aka porous organic frameworks, POFs) to harness some of the ensemble effects of enclosing a catalytically active site within a molecularly sized pore, like in enzymes. We devise a synthesis approach whereby pre-formed, well-defined particles are first supported onto the surface of POFs, then encapsulated through subsequent polymer synthesis, where polymer chains are grown from the pendant functional groups still present on the Pd/POF surface.

Our most puzzling observation was that at high conversion for CO oxidation, activity of certain POF-based materials oscillates between two states of moderate and high rates.  CO2 interaction with the POF is again key for understanding.  After X-ray absorption studies showed no differences in our catalysts during oscillations, we developed a model describing the possible rates of material transport to and from the active Pd surface based on CO2 binding energy.  We found that we predict diffusion control at the conditions in our catalytic experiments where the catalyst can “turn off” and oscillate in activity.  Knowing that changing POF chemistry can affect diffusion even to the extent that the catalyst appears to turn off is an important lesson from these materials and will allow us and other researchers to apply these principles to other systems where control over transport rates of species is desired.

The lessons we learned in CO oxidation with POF encapsulated materials of the ability to affect catalytic transition state and to set limits on transport based on chemical affinity allows for design of catalysts tailored for specific reactions akin to design of enzymes for specific biological catalysis. We expect this approach to be valuable in many areas of catalytic science and technology, and to provide inspiration for advanced catalysts with high performance. 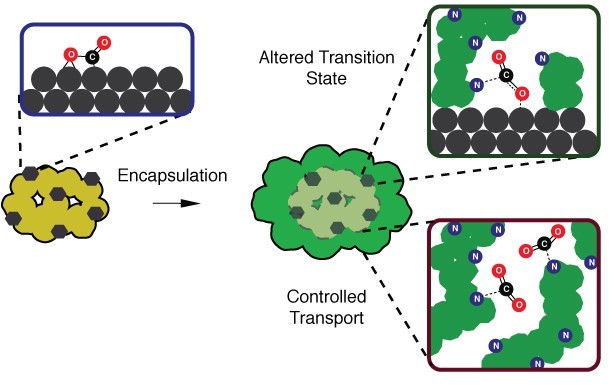