By studying highly unusual yttrium(II) compounds we show it is possible to produce molecular spin qubits with long phase memory times even with inappropriate ligands.
Richard Winpenny
Professor of Inorganic Chemistry, University of Manchester
Follow
Like Liked by Michal Filus

Molecular spin qubits show great promise for quantum information processing, but loss of phase information due to noise interference hinders their applicability. Here the authors engineer the electronic configurations of the metal centres in a series of divalent rare-earth complexes and succeed in p…

We’ve been studying molecules as possible qubits for most of this century. In early studies with Arzhang Ardavan’s team in Oxford, we used pulsed EPR spectroscopy to measure the phase memory time, i.e. how long the spin retains the quantum information to be processed. https://journals.aps.org/prl/abstract/10.1103/PhysRevLett.98.057201

I began to wonder whether reducing the number of nuclear spins in the ligands was the only possible route to better phase memories. About that time we had a lecture from Bill Evans (UC Irvine) and he spoke about his extraordinary compounds that contain yttrium(II). I’m a well-educated Imperial graduate and I know that yttrium(II) should not exist, but Bill’s evidence was pretty good. Specifically, there was an EPR spectrum showing it was a radical and a very isotropic radical. I proposed a more detailed study to Bill and was delighted when he accepted the idea and sent us some samples.

The idea was that a magnetic molecule with an electron in an s-orbital would have a very long phase memory time because the electron does not interact with the environment except via the orbital angular momentum. If the orbital angular momentum were completely quenched (i.e. L = 0, as in an s-orbital), then the environment should be irrelevant. Bill’s Y(II) compounds looked like the electron was in an s-orbital because the g-values were so similar; if it were d1 one g-value should have been very different to the other two.

This paper is the result of the study.

The unpaired electron appears to be in an orbital that does not interact with any nucleus strongly – it is a very delocalized SUMO. The ligands are totally wrong for molecular spin qubits as they contain multiple methyl groups and have not been deuterated. Despite this the phase memory times are long enough to perform Rabi oscillations in single crystals at room temperature. The molecules break the rules that we proposed with Arzhang and his team, and that is always fun.

Could these molecules be used in quantum computing? Probably not these molecules, but I think they point towards modifying the electronic states of the metal radical and not just engineering the ligand shell. There are very few molecular radicals where the unpaired electron is in an s-orbital. It is worth looking for more, ideally using rigid ligands with no H-atoms present. 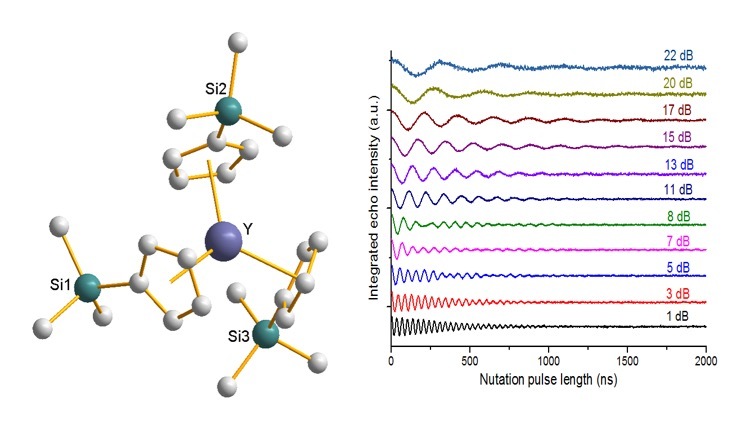 By studying highly unusual yttrium(II) compounds we show it is possible to produce molecular spin qubits with long phase memory times even with inappropriate ligands.