Exfoliation of layered materials is a common route to 2D materials. Here an amorphous copolymer of benzoquinone and pyrrole is exfoliated to yield an active HER catalyst.

This material is a serendipity for me. We didn’t aim to synthesize amorphous two-dimensional (2D) materials based on conjugated-polymer network. In our previous works, conductive polymers, such as polypyrrole (PPy) and polythiophene (PTp), were synthesized on the crystal surface of organic oxidants with diffusion of monomer vapor (Figure 1). The oxidative polymerization with diffusion of the monomer vapor proceeds on the crystal surface more efficient than that in the solution phase. Quinone derivatives were used as the oxidant crystals for synthesis of the conductive polymers toward improvement of the yield, control of the morphologies, and enhancement of electrochemical properties. According to the results, reduction potential higher than the certain value is required to induce the oxidative polymerization of pyrrole (Py) (Figure 1).

Figure 1.   Experimental setup for diffusion of Py vapor on the crystal surface of quinone derivatives. Our previous target is oxidative polymerization of Py. The present study started with just a reference experiment in our previous works.

The results indicate that PPy was not obtained by oxidative polymerization on the surface of benzoquinone (BQ). Therefore, we didn’t expect anything to just a reference experiment for the use of BQ without any substituents. Mr. Yano and Dr. Sato, co-authors, said “some black objects like PPy were formed on the crystal surface of BQ with diffusion of Py.” They also claimed “FT-IR spectrum was different from that of the PPy.”

Figure 2.   Reaction and construction schemes of the amorphous two-dimensional (2D) materials containing a conjugated-polymer network and their exfoliation into the nanosheets.

The careful structure analyses elucidate formation of the amorphous 2D network containing conjugated polymer network (Figure 2). The two different reactions, such as C-C bond formation and pericyclic reactions, simultaneously proceed on the surface of BQ crystal with diffusion of Py vapor at 60 °C under ambient pressure. The copolymer of BQ and Py (BQ-Py) formed the random network structures and their stackings. Therefore, the resultant structure was regarded as an ‘amorphous’ layered material. Recently, metal- and covalent-organic frameworks (MOF and COF) have attracted much interest. Whereas these materials have regularly ordered pores and high crystallinity, our amorphous layered material containing network polymer has low crystallinity and no continuous pore. The amorphous layered materials were exfoliated into the nanosheets in 44.6% after 1 h. The amorphous nature facilitates the efficient exfoliation in high yield. Furthermore, the BQ-Py polymer nanosheets showed superior activity as a metal-free catalyst for electrochemical hydrogen evolution reaction (HER) with the overpotential 0.28 V (vs. RHE). In general, metal-free HER catalyst, such as heteroatom-doped graphenes and graphitic carbon nitrides, are synthesized at temperature higher than 500 °C. Our BQ-Py polymer nanosheets were obtained at 60 °C under ambient pressure. The BQ-Py nanosheets can be regarded as an environment-friendly and resource saving functional material for next generation. Furthermore, we can control the structures from molecular to nanometer scales and their properties by design of the monomer molecules and reactions. 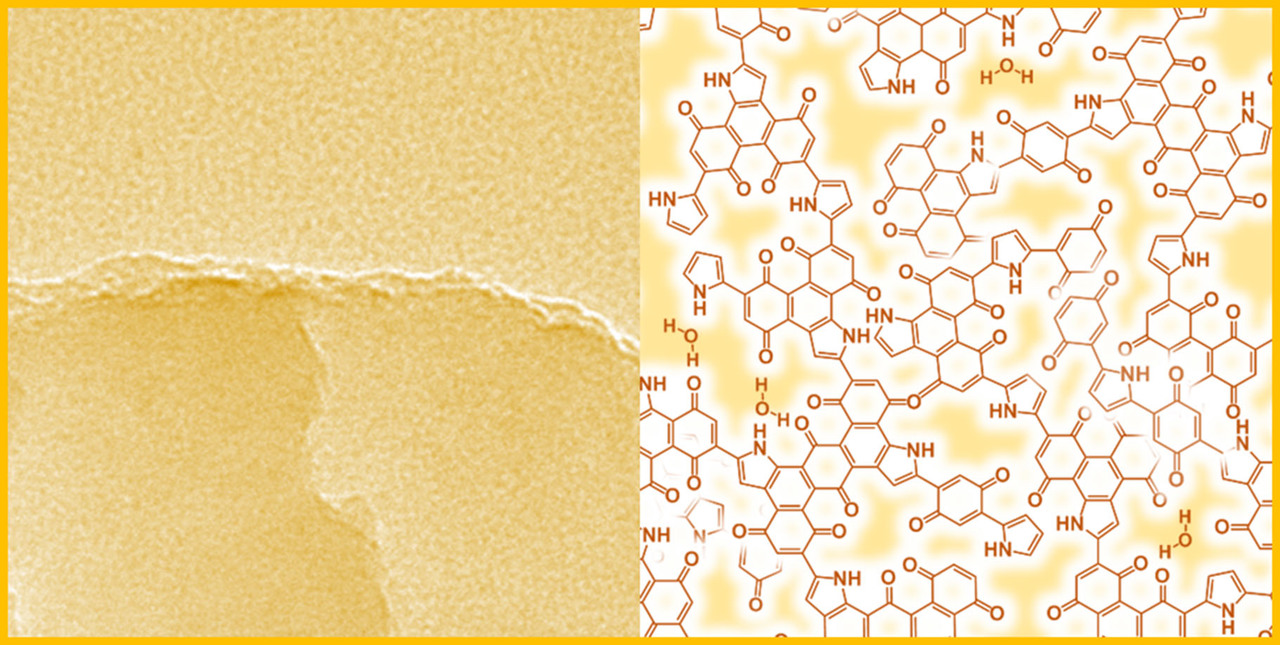