ortho-Aminomethylphenylboronic acids are routinely used in sensors for carbohydrates, but the function of the o-aminomethyl group in enhancing binding affinity and modulating the emission of appended fluorophores has been the matter of some debate. This Review presents a unified picture of the struc…

Following on from the first boronic acid fluorescent system published in 1992 by Juyoung Yoon and Tony Czarnik, Tony James and Seiji Shinkai in 1994 and 1995 co-authored a series of papers that would have a profound impact on the field of supramolecular chemistry.  They reported the use of o-aminomethylphenyl boronic acids appended to anthracene.  Upon addition of sugars, such as fructose and glucose, the anthracene emission of the receptors was found to turn-on.  The study sparked a revolution in approaches to sugar sensing. Among the reasons for the profound impact was the demonstration that synthetic receptors could be used for molecular sensing, the use of reversible-covalent bonding to overcome the strong hydration that impedes sugar sensing in water, and the potential that the biological roles of sugars could now be monitored.  With this precedent, along with many others, Czarnik published his call-out to the supramolecular community “Desperately Seeking Sensors”, and the field of chemosensing was born.

The mechanism of emission turn-on found for the James/Shinkai sugar receptors was postulated to be derived from a modulation of photoinduced electron transfer (PET).  Binghe Wang proposed a different mechanism in 2003/2004 involving the absence, or presence, of a solvent molecule bridging the proximal aminomethyl group in the boronic acid or a sugar-bound boronate ester, respectively, which came to be known as the pKa-switch mechanism.  Thus, a wee controversy arose.  Of course, this is normal in chemistry and is the way in which our field advances.  Chemistry has greatly benefited from the norbornyl classical/non-classical carbocation debate, the low-barrier hydrogen bond debate, and many others. Debates are settled by experimentation until the data best supports one mechanism over another, albeit with the caveat that a mechanism can never actually be proven.

Enter stage right, Eric Anslyn.  At a January 2004 Sanibel Island Young Supramolecular Chemists workshop he had organized with Steve Zimmerman, he learned of the alternative pKa-switch mechanism.  It was clear from discussions with Wang that the main difference between the PET and pKa switch mechanisms was the absence or presence of a protic solvent molecule inserted between a sugar-bound boronate ester and the aminomethyl group, respectively. In other words, the main question was whether there is or is not a dative bond between the N and B in this class of sensors. In 2006 Anslyn published a study to delineate the differences.  He further noted in his lectures of that era that even Shakespeare, when writing the soliloquy that his protagonist Hamlet professes when contemplating death and suicide, had anticipated the questions that surrounded the field of boronic acid sugar sensing:

Whether 'tis nobler in the complex to associate the solvent, or suffer the arrows of dative bonding

Or take up arms against a sea of mechanisms

And by experimenting settle them. To PET, to pKa switch -

No more aggregate – but by internal conversion say we end”

The treatise in Nature Chemistry delves deeply into mechanistic concerns of pKa’s, chemical structures, kinetics/thermodynamics, and photophysics.  As described therein, the treatise shows how persistent physical organic chemistry pursuits settled the debates first nearly presaged by Hamlet.  The treatise reviews data from many kinds of experiments that supports that both boronic acids and boronate esters are consistently solvent-inserted in protic media.  Thus, both the PET and pKa switch mechanisms are not operative.  Instead, as revealed in 2017 and 2018 with work by Chapin and Sun (currently Professor at XJTU and previous post-doc for Anslyn and PhD student of James), respectively, that the original James/Shinkai system partially turns-on emission from a disaggregation mechanism. However, the best was yet to come.  Making a late and surprise entry to help explain the fluorescence response of many boronic acid sensors, as well as the classic James/Shinkai sensor, was a turn-on mechanism induced by arresting internal conversion from the -B(OH)2 groups upon conversion to ester -B(OR)2 groups, which finally nailed the final act (the last line of the near-quote from Hamlet’s soliloquy). The accepted mechanism is now referred to as a “loose-bolt” mechanism, which is a term used in the literature to refer to the leaking out of excited state energy through loose rotors (any chemist whose hobbies include working on cars would have a natural affinity to this terminology! See figure, Anslyn’s 1953 MK VII Jaguar).

In 2005 Anslyn showcased his Hamlet “tongue-in-cheek” quote (only the first two lines at that point in time) during a lecture as a participant in a Boronic-Acid symposium organized by Wang at Pacifichem in Hawaii, and with James in the audience.  Later that evening, while sitting in his hotel room the idea of writing an article that would gather together the data from all research in this field to settle the debates arose, with James and Wang as co-authors.  Thus, the treatise associated with this blog had its birth in the sun, sand, and cocktails of Hawaii around 14 years ago.

It is the opinion of the three corresponding authors that collaboration and friendship, not adversarial quarreling to protect one’s viewpoint, is the best path forward in science. In this spirit of friendship and after numerous meetings with James and Wang; in airports, at conferences, and several more times in pubs over beer and meat pies, it was clear that not all was categorically settled.  The mechanism of emission turn-on could still be explained in a series of different ways.  Thus, the treatise had to be put on the back-burner until more experiments were performed. However, there were problems.  At various times in their graduate careers at UT Austin, three of the co-workers listed as authors on this treatise: Metola, Collins, and Chapin, became extremely frustrated by their thesis work that involved 11B-NMR spectroscopy, kinetics, and photophysics, and were ready to throw in the towel.  Suffice it to say, boronic acids are not simple beasts to deal with!  They are notoriously difficult to purify, their 11B-NMR spectra can be confusing, they are hard to crystalize, and studying their kinetics/thermodynamics routinely requires indicator displacement assays that complicate the analyses.  Thus, persistence was required to keep the studies on-going until the smoke cleared.

In fact, Romeo himself almost said, when grieving over the fact that Rosaline does not love him, -

As alluded to above, the three corresponding authors finally agree on a single mechanism, and sing to the same tune – Loose Bolts Rock! (From the JACS album 2018). It is worth highlighting that such friendships born out of differences of opinion is what makes our careers so much fun. Nothing is better than sharing and rejoicing in scientific curiosity with friends from around the world. 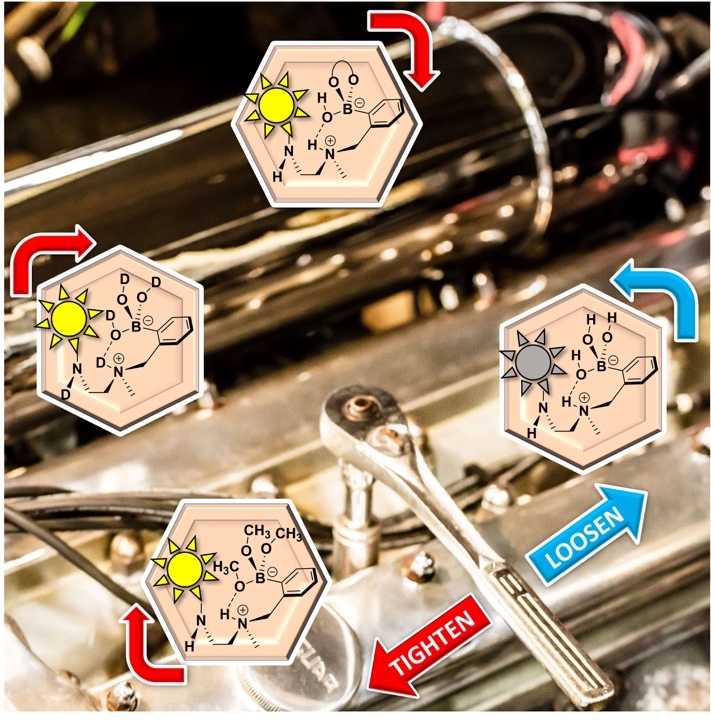