Visualizing catalysts at work poses significant experimental challenges. Here, an operando scanning tunnelling microscopy study of the cobalt-catalysed Fischer–Tropsch synthesis is presented, which establishes steps as the active sites of the process by correlating activity under realistic condition…

"Seeing" the individual active sites of an operating catalyst would bring us as close to the core of a catalytic reaction as one can possibly expect. With this idea in mind we started a project several years ago in which we make use of the atomic-resolution capability of scanning tunneling microscopy (STM). STM does not require vacuum, so that there is no fundamental limit to the gas pressure, and, at least in principle, all the industrial processes using heterogeneous catalysts at high pressures are accessible. Some limitations exist, e.g., a single crystal model should be available, the sample should be conductive, and the temperature should not be too high. Moreover, as we soon found out, there are many practical problems in such an experiment.

Which reaction to choose? We decided for the cobalt-catalyzed Fischer-Tropsch (FT) synthesis, a large-scale industrial reaction currently applied for producing fuels from CO/H2 mixtures. In the future, it might also play a role for energy storage, by producing CO/H2 mixtures by H2O electrolysis and CO2 capture from the atmosphere. For the experiments a home-built STM was used that operates at pressures up to 1 bar, sufficiently close to the 20 to 40 bars of the industrial reaction (and at the same temperature of 500 K) that FT activity could be expected. The first problem to be solved was the extremely low concentrations of products formed at the low surface area of the Co(0001) model in the relatively large volume of the STM cell. By using a specially configured GC we finally managed to detect hydrocarbon products in the ppb regime. The second problem was gas purity. In the beginning, the surface quickly became covered by sulfur despite the use of ultra-pure gases, but this problem could be solved using filters. A tougher contaminant was nickel, obviously formed by decomposition of Ni carbonyl, and finally we had to coat the entire stainless steel STM cell with amorphous silicon to prevent Ni carbonyl formation. Ultimately, the surface remained clean in the gas atmosphere, and hydrocarbon molecules could be detected under the same conditions as the STM measurements. The definition of an operando experiment was thus fulfilled.

To our surprise, the STM images of the operating model catalyst showed a morphology that was indistinguishable from the morphology in ultra-high vacuum. The surface displays atomic steps, but at low densities, not much different from the surfaces of other single crystal metals. From the many previous (but indirect) experiments and from theory it was expected that atomic steps are the active sites of the FT reaction because they provide the adsorption sites at which CO molecules could dissociate, the most likely rate limiting step. In order to find out if the steps have an effect on the catalysis we sputtered the crystal with Ar+ ions, and this led to an enhanced density of steps, without creating other defects. When the FT activities of these sputtered samples were measured, the turnover frequencies were, in fact, higher. They even scaled linearly with the density of steps (Figure 1). Even more, when this scaling function was extrapolated to the step densities calculated for the small Co particles of the industrial supported catalyst, the turnover frequencies predicted were in the range of experimental values of these catalysts. The study thus proves the role of atomic steps as active sites in structure-sensitive reactions by direct observation under operation conditions.

Figure 1: Linear scaling of the Fischer-Tropsch activity with step densitiy as measured by STM. The step density of the Co single crystal was varied by sputtering and annealing. 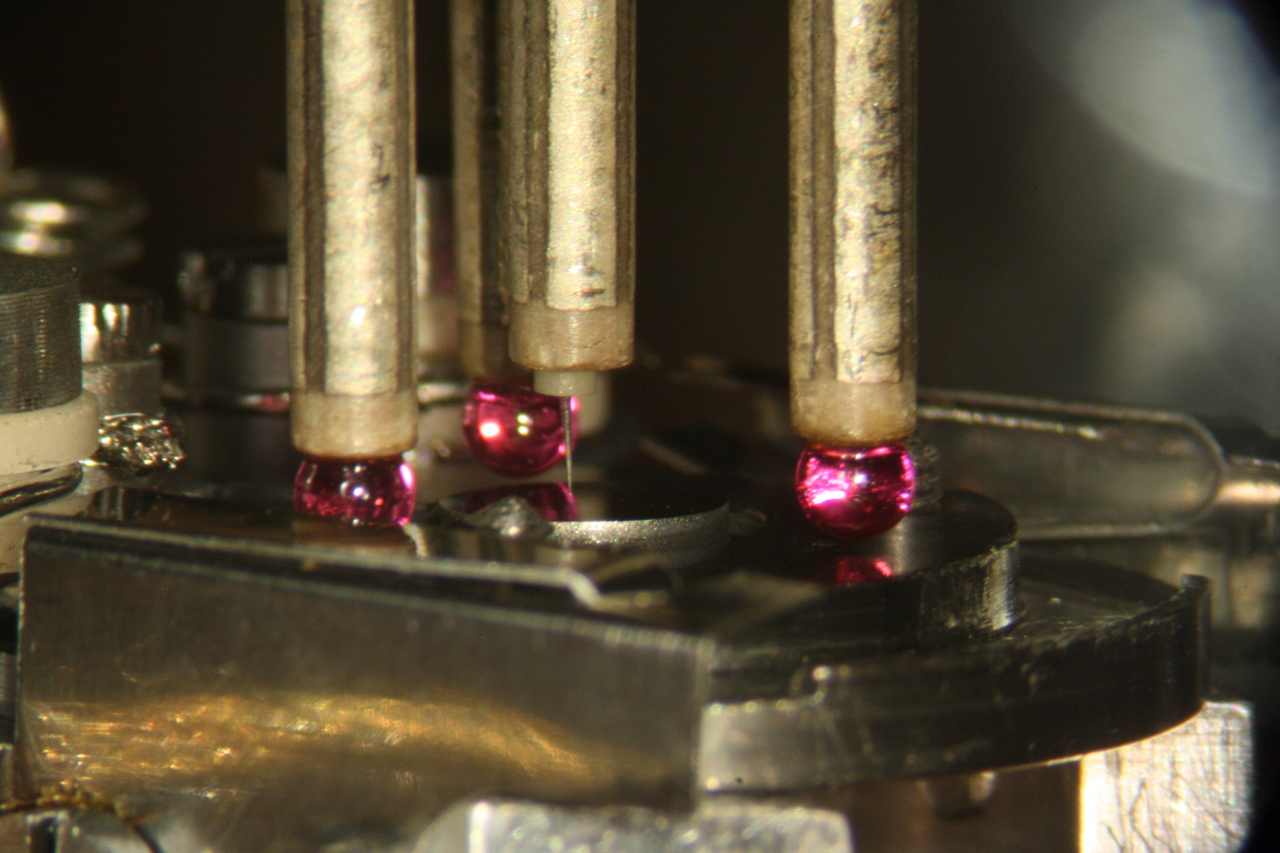