Antimony trisulfide is a promising light harvester for photovoltaics. Here the growth of single-crystals of antimony trisulfide on polycrystalline titania is reported to proceed via an epitaxial nucleation/growth mechanism. The resulting solar cell delivers a power conversion efficiency of 5.12%.

Photovoltaic solution to global energy demands has attracted the efforts to get the low-cost and efficient photon-to-electron conversion inorganic material systems for solar cells thanks to the high charge mobility and good stability of inorganic semiconductors. The bulk/nano-planar heterojunction (BnPHJ), consisting of an inorganic bulk p-type semiconductor layer of grain sizes comparable to layer thickness and an inorganic n-type nanoparticle film, is preferred in efficient solar cells. However, solution-processed growth of BnPHJ is still challenging. Moreover, heterojunctions are normally formed epitaxially between two single-crystals even with lattice-misfits. While the growth of large single crystals on polycrystalline surface has been observed experimentally, the nucleation/growth mechanism of such single-crystals is so far not clear yet. Therefore, to develop the solution-processing strategy to prepare the BnPHJ and get insight into its formation mechanism is of a great importance to the fabrication of efficient and low-cost solar cells.

Antimony trisulfide (Sb2S3) and titania (TiO2) are the important p-type photon-harvesting material and n-type electron transporting material for solar cells, respectively. In the present paper, we develop an oriented seed-assisted solution-processing method to prepare Sb2S3/TiO2-BnPHJ, where the monolayer of large, preferentially oriented and closely packed stibnite Sb2S3 single-crystals in the form of truncated cuboids is in situ grown over polycrystalline anatase TiO2 nanopartilce film surface. It is found that the growth features of Sb2S3 single-crystals are: (i) Sb2S3 crystal orientation is exclusively governed by the beneath TiO2 nanoparticle film, (ii) one Sb2S3 single-crystal is grown over many TiO2 nanoparticles, (iii) the heterogeneously nucleation follows the epitaxial relationship of Sb2S3 (101) // TiO2 (101), and (iv) a growth transition zone exists at the Sb2S3/TiO2 interface, different from the sharp interface in the cases of single-crystalline/single-crystalline heterojunctions. Based on experimental evidences and theoretical calculations, an orientation-competing-epitaxial nucleation/growth mechanism is proposed for understanding the growth of the Sb2S3 single-crystals on polycrystalline TiO2 surface.

The Sb2S3/TiO2-BnPHJ possesses the following distinctive advantages for photovoltaics: it has a preferred material structure and a high absorption coefficient, it is stable and easily solution-processed on a large scale without cracks, and the [221]-oriented Sb2S3 single-crystals provide the highly effective charge transport channels formed by the covalently bounded (Sb4S6)n ribbons for the photogenerated charge carriers inside the Sb2S3 layer to reach collection electrode. With an organic hole transporting material (i.e., Spiro-OMeTAD), the resulting solar cell of the heterojunction yields a certificated and considerable power conversion efficiency of 5.12%. We believe that the present study provides a facile solution-processing strategy to prepare the high-quality Sb2S3/TiO2 planar heterojunctions for photovoltaic and other optoelectronic applications, and offers an understanding of the heterogeneously epitaxial growth of large single-crystals on polycrystalline surface. We are attempting to obtain the more efficient solar cell based on Sb2S3/TiO2-BnPHJ. Please pay your attention to our future works. 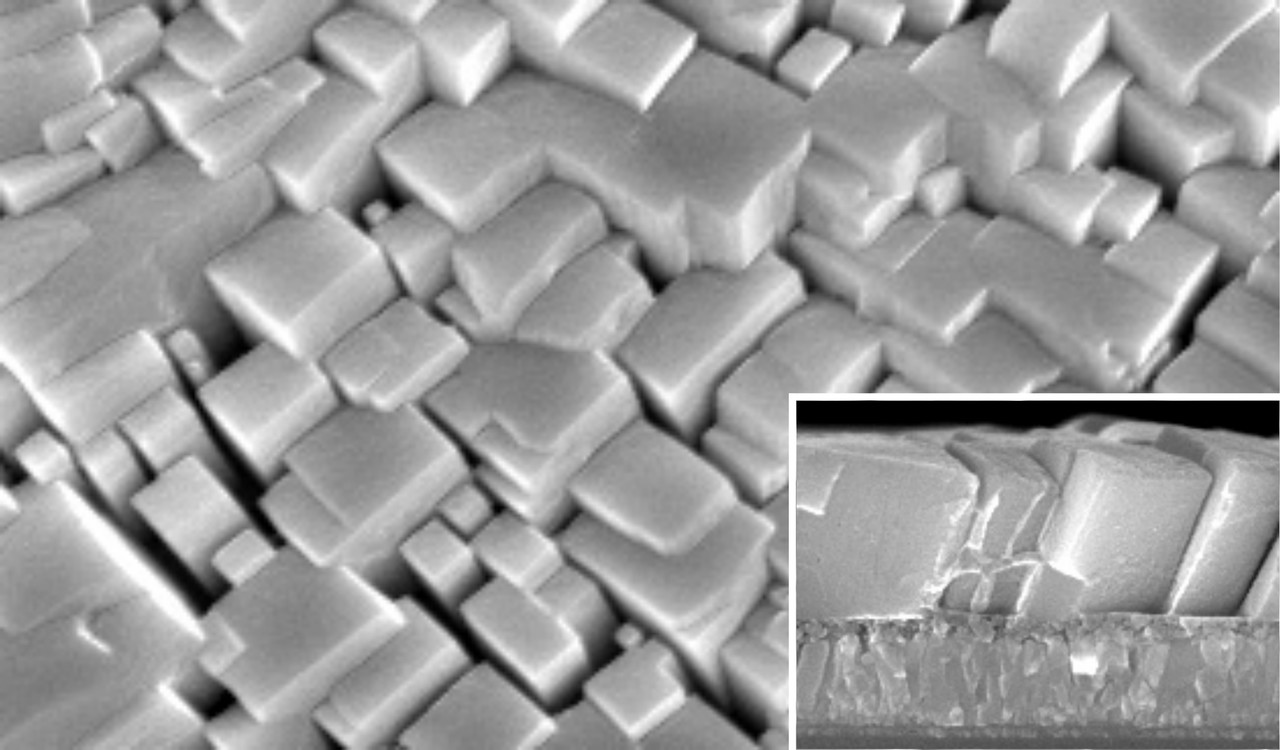