Electrochemically activating a 2D chalcogenide for the hydrogen evolution reaction

The performance of electrocatalysts for the renewable production of hydrogen is currently limited due to the difficulty of materials design. We show that tailoring the electronic structure under applied reductive bias is key to optimal electrocatalytic performance of a 2D chalcogenide material.
Dr Alexey Ganin
Lecturer, School of Chemistry, University of Glasgow
Follow
Like Liked by Dr Alexey Ganin and 1 other

The performance of electrocatalysts for the renewable production of hydrogen is currently limited due to the difficulty of materials design. We show that tailoring the electronic structure under applied reductive bias is key to optimal electrocatalytic performance of a 2D chalcogenide material.

I am old enough to remember the days of conferences past when a presenter showed projection graphs for an anaemic growth of renewable electricity share towards low double digits. Still the audience shook their heads in disbelief. That all sounded too fast, too furious. Achieving 10 - 15 % of overall electricity production sounded like an electric dream.

A decade later and the reality exceeded all expectations according to the UK's Department for Business, Energy & Industrial Strategy data. The capacity in renewable share of electricity added in the UK in the last 8 years is breath taking. If the stunning growth continues at the same pace we’ll soon reach a point where we’ll be producing more renewable electricity than our consumption demands. Something that already is happening in Scotland where the record high levels are produced.

However, as it currently stands the excess of generated energy must be used as it’s produced or else it goes to waste. It’s vital that we develop a robust suite of methods to store the energy for later use.

We can store excess electricity as a fuel by electrolysis, which uses electric current to split the bonds between the hydrogen and oxygen atoms of water, releasing hydrogen and oxygen gas in the process. If the current is generated through renewable means such as wind or solar power, the entire process releases no additional carbon into the atmosphere, making no contributions to climate change. Hydrogen gas can then be used as a zero-emission fuel source in some forms of transport such as buses and cars or for heating homes.

Our research paper published in Nature Communications titled ‘The rapid electrochemical activation of MoTe2 for the hydrogen evolution reaction’ provides an important new insight into producing hydrogen from electrolysis more effectively and more economically. The team discovered that electrodes covered with MoTe2 showed an increase in the amount of hydrogen gas produced during the electrolysis when a specific pattern of high-current pulses was applied. By optimising the pulses of current through the acidic electrolyte, they could reduce the overpotential needed for hydrogen evolution by nearly 50%. Supported by computational studies we explained this dramatic improvement by relating it to the electronic structure of the catalyst.

MoTe2 is a layered material in which layers behave as independent two-dimensional semi-metals. As a result the telluride material is prone to changes in conductivity under external stimuli. When an electric current is applied to the electrode this stimulates the electronic structure of MoTe2 and causes minor distortions of bond lengths. This makes the protons from the electrolyte “stick” to the surface of the catalyst leading to the evolution of H2 gas on recombination.

Since the level of catalytic enhancement is controlled by electric currents, recent advances in machine learning could be used to fine-tune the right sequence of applied currents to achieve the maximum output. The next stage for the team is therefore the development of an artificial intelligence protocol to replace human input in the search for the most effective electronic structures in similar catalytic processes.

There are numerous layered materials with discrete two-dimensional layers and they may be prone to electron doping. What we’re keen to do now is develop a machine-learning tool which can screen the activation parameters instead of a human. We’re hopeful that we can find new ways to optimise the electronic structures, further improve catalytic performance, and move closer to making hydrogen fuels as more attractive and realistic way of reaching a zero-carbon future.

Figures and pictures by Alexey Ganin and Jessica McGlynn

Dr Alexey Ganin
Lecturer, School of Chemistry, University of Glasgow
Follow
I believe green energy is great way to heat our homes but what if the wind is not blowing and sun is not shining? This is a big challenge for re-newables and storing excess energy as fuels for later use can be a great solution to this issue. I work on electrocatalysts that could help for simple and efficient generation of H2, CH4 and other carbohydrides from water or CO2 using a green electricity source. I think solids are fascinating to work with and potentially very useful in energy conversion and storage. At my lab we just can't get enough of solid state materials and make them in thin films, slurries, colloids, nanoparticles and powders. 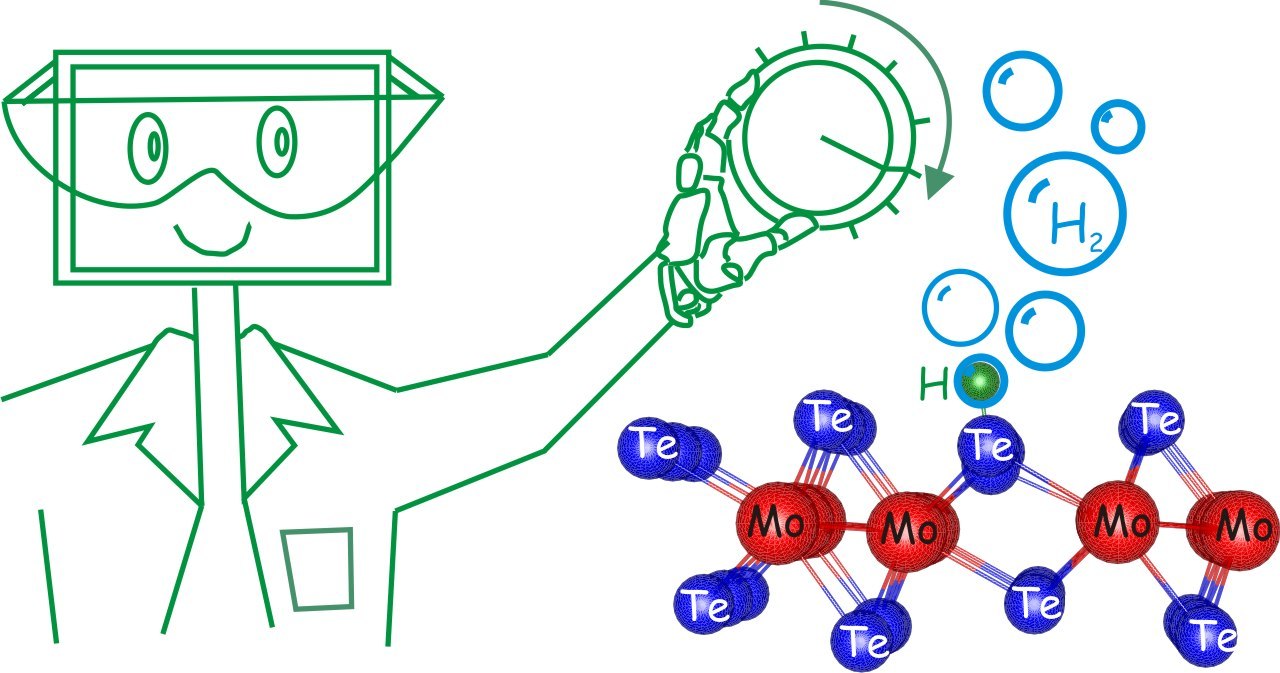 Electrochemically activating a 2D chalcogenide for the hydrogen evolution reaction

The performance of electrocatalysts for the renewable production of hydrogen is currently limited due to the difficulty of materials design. We show that tailoring the electronic structure under applied reductive bias is key to optimal electrocatalytic performance of a 2D chalcogenide material.