The asymmetric hydrogenation of alkenes is a common route to optically active compounds, but alkene synthesis is often atom-inefficient, and the formation of isomers further complicates the procedure. Now the Ir-catalysed deoxygenation of racemic alcohols is shown to be a simple route to enantioenri…

Our group has been focusing on the field of asymmetric hydrogenation for more than 15 years and developed various methods to hydrogenate tri- and tetrasubstituted olefins with high enantioselectivities. Generally, olefins are required to be isomerically pure because the cis- and trans-substrates provide products with opposite absolute configurations. However, in most of the cases, the protocols to prepare isomerically pure olefins, especially unfunctionalized olefins, are painful because the purification of isomeric mixtures is always difficult and time consuming. It’s significant to find readily available substrates as an alternative of olefins.

This work built on a chance discovery in our recent published paper (ACS Catal. 2019, 9, 6169). Last year, by serendipity, we found that a t-Bu carboxylic ester group was quantitatively converted into a carboxylic acid group in the hydrogenation of tetrasubstituted olefins. We brought up this interesting phenomenon to discuss in the group meeting (Fig. 1). Hydrolysis was first excluded since the reaction was carried out under anhydrous conditions. Then we suspected that a carbocation was formed in the reaction that subsequently generated isobutene as a by-product. Although it was not detected, this ‘small’ by-product led to large discussions. My supervisor Prof. Pher Andersson suggested that the reaction might go via sequential olefination and hydrogenation. Then we became curious to see if the transformation from a racemic compound to a chiral product could be achieved by using our N,P-Ir catalysts. What made us even more exciting was the reaction still preceded smoothly when switching an ester to an alcohol, which meant that the preparation of starting materials is much easier. We believed the asymmetric deoxygenation of racemic alcohols is excellent since it provides a simpler and atom-efficient route from ketones to chiral alkanes.

Our hypothesis was soon confirmed by the first shot of asymmetric deoxygenation of racemic alcohol, which provided the chiral alkane with 81% ee. Later we managed to push the ee to 91% in the following optimization and then to 99% in the substrate scope exploration. However, at that moment we still had no clue that why the enantioselectivity was so high since the elimination of carbocation produced isomeric mixtures. After mechanistic studies and many discussions, we believed that the Ir-catalyst should be involved in the elimination step and locking enantiometric faces before the olefination. Fortunately, Prof. Mårten Ahlquist performed the computational studies to help us gaining deeper insight. He managed to do the complicated calculations which turned out to be perfectly matched our hypothesis. During the time waiting for the calculations, we succeeded in two applications to show the utility of our strategy, which is very important for the reviewing.

This is our story of a ‘big’ work came from a ‘small’ by-product. 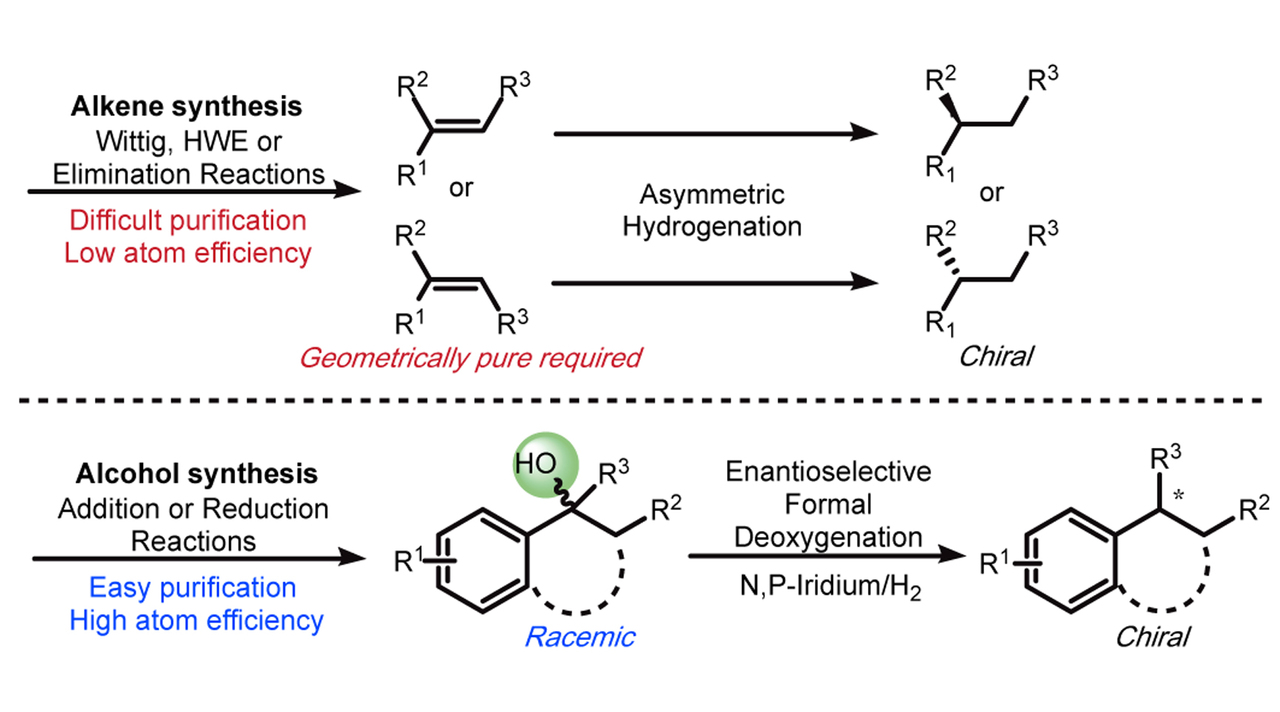