Herein, we describe the radical-mediated ring-opening and enantioselective cyanation of four- and five-membered cycloketone oxime esters to access chiral 1,5- and 1,6-dinitriles.

Ring-opening reaction via selective cleavage of C−C bond has long been used as a powerful strategy to build up complexity of a molecule in a single step. Due to the thermodynamic stability of C−C single bond, high temperature is usually required to enhance the reactivity, which is normally considered unfavorable to achieve high enantioselectivity. Thus, asymmetric reaction induced by ring-opening C−C bond cleavage still remains challenging since it needs to meet the balance between selectivity and reactivity in such transformation. Among developed methods, radical-mediated C−C bond cleavage stands out and offers a solution for further diverse enantioselective functionalization benefited from its mild conditions and reaction diversity.

Our group has recently been interested in developing new protocols on the basis of mechanism initiated by aminyl radical generated from N-H bond in alkyl amine (Angew. Chem. Int. Ed. 2017, 56, 15436; Chem. Sci. 2017, 8, 3838; Chem. Commun. 2017, 53, 12229). However, concerning enantioselective transformation initiated by aminyl radical in our protocols, it usually suffers from harsh reaction condition such as high temperature, etc., which is detrimental to the generation of enantioenriched products. Alternatively, iminyl radical, another important member of nitrogen-centered radical, can be easily formed from readily available oxime derivatives under mild conditions, which might be beneficial for the further asymmetric transformations.

According to the pioneering discoveries of Zard and recent works from other groups, iminyl radical-mediated ring-opening of cyclic oxime derivatives is an efficient pathway to cleave C−C single bond via β-scission. As such transformation generates cyanoalkyl radical in situ, we envision this radical could be further trapped by chiral transition-metal catalyst, followed by reductive elimination from the metal cyanide complex to furnish corresponding optically active dinitrile.

Fig. 1 a Ring-opening and enantioselective cyanation of four- and five-membered cycloketone oxime esters. b The synthetic applications.

To our delight, radical-mediated ring-opening and enantioselective cyanation of four- and five-membered cycloketone oxime esters proceed smoothly to access chiral 1,5- and 1,6-dinitriles (Fig. 1a). Specifically, C−C single bonds in less strained 5-membered cycloketone oxime esters can be cleaved for asymmetric cyanation via a radical pathway by combining photoredox and copper catalysis. And, as for strained cyclobutanone oxime esters, asymmetric ring-opening cyanation can be realized by single copper catalysis. Both reactions feature mild conditions, high catalytic reactivity, excellent enantioselectivity, low catalyst loading and broad substrate scope. Mechanistic studies indicate that the benzylic radical generated via C−C single bond cleavage is involved in the catalytic cycle. The synthetic utility of the protocols has been demonstrated by further transformations of the chiral dinitriles to diamides and diamines without obvious loss of enantioselectivity (Fig. 1b). This radical relay strategy offers a solution for remote functionalization by ring-opening C−C single bonds cleavage, and provides an efficient approach for rapid formation of chiral dinitriles. 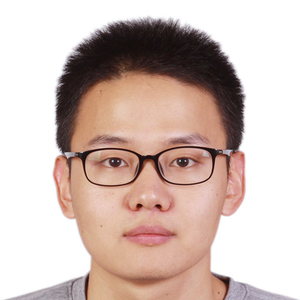 doctor graduate, University of Science and Technology of China