Quantum dots functionalized with energy-accepting dyes hold promise for converting low-energy photons into higher-energy visible light for bioimaging, catalysis and solar energy harvesting. Now, it has been shown that non-toxic silicon quantum dots can be used in these systems; the transfer of spin-…

“Why aren’t you doing this with Silicon?”, asked Susan Kauzlarich, associate editor of Chemistry of Materials, and Distinguished Professor of Chemistry at the Univ. of California, Davis (UC Davis). I couldn’t muster a decent answer to her question, having only had experience with chalcogenide-based quantum dots. Susan then went on to suggest that the non-thermal plasma synthesized silicon quantum dots would probably be the best materials to start with, pointing out that my colleague at UC Riverside, Lorenzo Mangolini, would be the perfect person to start this work with. She was right.

This conversation kick-started this work using silicon nanocrystal light absorbers for photon upconversion. At that time, in Nov. 2017, it was not clear before our results that silicon nanocrystals can efficiently absorb light and transfer energy to molecular acceptors, given their well-established indirect band gap in bulk solids and the lack of any precedence for this process. Furthermore, the nature of visible emission from silicon colloids is still highly debated. We had to develop new knowledge systematically, all while producing high quality samples that requires taking extreme care to avoid any oxidation-induced effects.

There are many proposals on how to produce silicon quantum dots. Still, the plasma-based technique developed by Lorenzo Mangolini is recognized as the one that achieves the highest quality materials in term of structure, size control, and purity. There are only a handful of groups worldwide that can produce such high quality quantum dots, and I was fortunate that one of these groups is based exactly in the same building in which my lab is located. Having Pan Xia in my group as a talented 4th year graduate student in Spring 2018 has been crucial for this project. While I was travelling, she performed the first hydrosilylation reactions to functionalize the Si quantum dots from Lorenzo’s group. Our paper reports the first experimental observation where silicon quantum dots participate in triplet energy transfer, in the wake of many failed attempts since Dexter’s original idea was postulated in the 1970s. Most importantly, her thermal hydrosilylation creates an oxygen barrier that renders these Si quantum dot based triplet fusion photon upconverting platform stable in water and air. This is important for any biological applications.

This paper wouldn’t have been complete if not for the elegant analysis of the transient absorption measurements by Sean Roberts from the Univ. of Texas, Austin. Emily Raulerson from Sean’s group had to improvise because these experiments were rendered difficult due to the low absorption coefficient of silicon quantum dots at long wavelengths. Nonetheless, Emily and Sean could relate the photon upconversion quantum yields measured in UC Riverside under steady-state conditions to the rates and efficiencies extracted from ultrafast TA measurements at UT Austin. Importantly, this work showed that energy transfer from Si to anthracene can be upwards of 90% efficient, suggesting Si quantum dots hold a good amount of promise for energy transfer based applications.

This collaboration between materials synthesis (Mangolini), functionalization (Tang) and physical characterization (Roberts) perfectly leverages our complementary strengths. We look forward to working together to expand on this discovery.

This post was written by Ming Lee Tang, and edited by Lorenzo Mangolini and Sean T. Roberts. 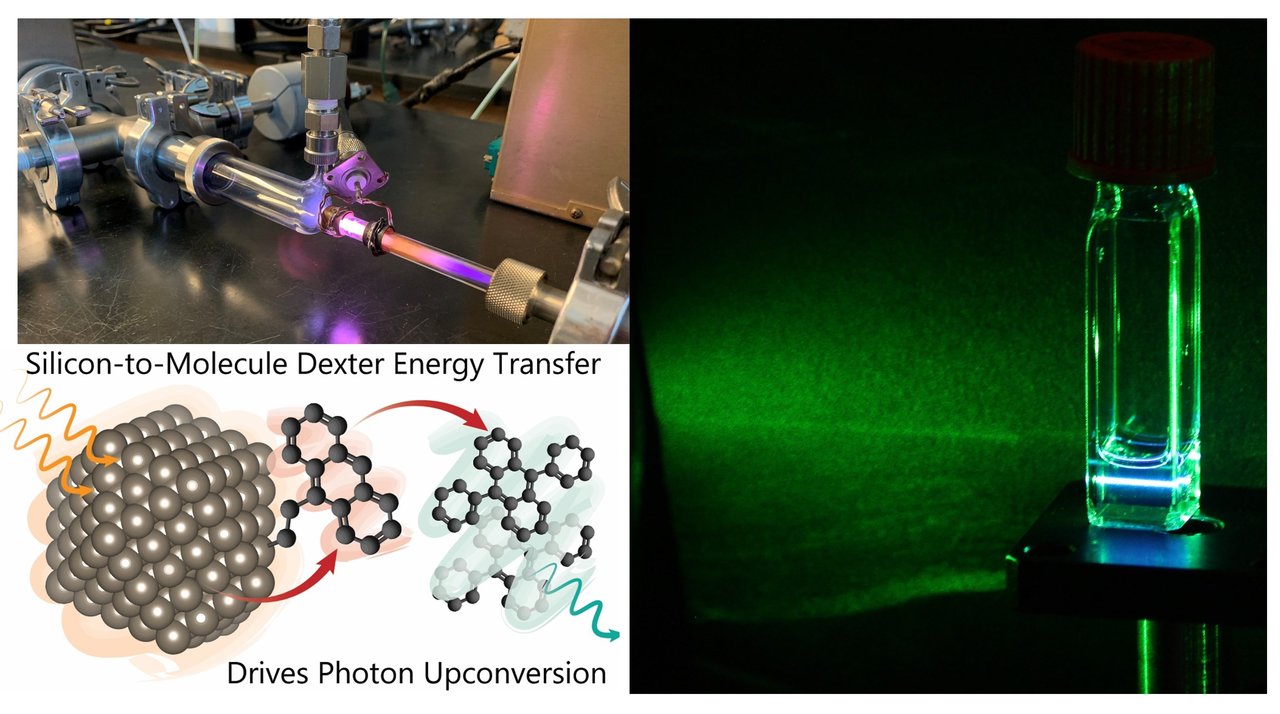