Defining how 21st century exposure to radioactive radon gas in North American homes has changed, and is now a increasingly a problem at all times of year

When we think of noble gases, we typically think of a relatively benign, inert element that might produce an attractive colour when excited. One noble gas, however, is very far from being benign, and in fact is the direct cause of many thousands of lung cancers per year across the Earth. This is radon gas.

Gaseous radon (222Rn) arises from the radioactive decay of radium, thorium and uranium-containing minerals, which can be very abundant in soils across this planet. It is classified by the International Agency for Research on Cancer (IARC) as a category 1 carcinogen, meaning radon is absolutely known to cause cancer in humans. 222Rn’s cancer-causing properties arise from its ability to emit highly mutagenic (DNA damaging) alpha particle ionizing radiation, the speed at which this occurs (it has only 3.8 day half-life), and the ease by which people are exposed to it (inhalation in any indoor air environment).

Our team specializes in radiation biology and, as alpha particles emitted by radon are the primary mode of ionizing radiation exposure across the average person’s lifetime, the question of how much, how fast and how often people are being exposed to radon is incredibly important to us.

We speculate that changes in our climate and behaviour underlies some of these trends. Over the past few years, poor North American summer air quality due to forest fire smoke has been staggering in its growing frequency and geographic scope. The destructive power of massive, ecology-altering fires has not only caused significant property damage and population displacement, but impacts the way we behave within the built environment. Regional governments, even thousands of kilometers away from fires, are issuing air quality statements, warning people to keep windows and doors closed. And rightly so, as smoke inhalation is a very significant health hazard. In terms of behaviour, it is also a statistical fact that more and more North American homes have air conditioning, and so, even in areas with good outside air quality, more people are sealing up their homes in warm months. As such ‘closed-house’ conditions become the norm throughout the year, we suggest this is leading to higher radon exposure.

Whatever the etiology of this is, it is clear that North American exposure to the noble gas 222Rn (and the particle radiation it emits) is increasing in magnitude and duration. We and others need to continue to study this issue, with radon data collection in real time becoming increasingly important to understanding our rapidly changing world. In doing so, we will learn how to decrease our exposure, and thereby decrease the future burden of radon-attributable lung cancers. 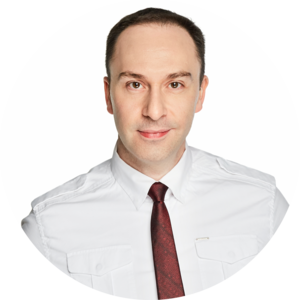 Dr. Goodarzi is the Canada Research Chair for Radiation Exposure Disease, and is both the Education Lead and Microscopy Lead for the University of Calgary’s Charbonneau Cancer Institute. He obtained his PhD from University of Calgary in 2005 and trained as a post-doctoral scholar at the Genome Damage and Stability Centre at the University of Sussex (UK) until 2010. In 2011, he opened his own laboratory at the University of Calgary’s Cumming School of Medicine. In 2015, he was named one of Calgary's Top 40 Under 40 for achievements in science and education. In 2016 he was made a “Peak Scholar” by University of Calgary President Elizabeth Cannon for his work in knowledge engagement and innovation in the community with regards to radon gas induced cancer. In 2018, he was selected as a TEDx speaker on how citizen based science can transform research. Dr. Goodarzi is also the founder and leader of Evict Radon, a national non-profit social enterprise aimed at enabling research into radon gas exposure and induced lung cancer by encouraging citizens to test for radon and share their findings with researchers.
Follow