‘Molecular tweezers’ offer a powerful design strategy for catalysts that can be activated or deactivated by conformational change. Here this design is extended to allow a regioselective allosteric effect upon binding of zinc ions.

In biological systems, the activity of enzymes can be controlled by the binding of an effector at a remote site different from the active site. This phenomenon is called allosteric regulation and plays a significant role in natural systems. Inspired by these biological systems, a variety of artificial switchable catalyst shave been developed over the past several years [1]. They present high potential to trigger or modulate catalytic activity and/or selectivity in situ with spatiotemporal control.

Our group is interested in using the mechanical motion of a molecular machine to control properties at the molecular scale. Molecular machines are systems designed to perform mechanical-like movements in response to an appropriate external stimulus [2]. In the recent years a wide variety of machines resembling their macroscopic analogues such as molecular motors, switches, shuttles, turnstiles or nanovehicles have been developed. The field has been recognized in 2016 by the Nobel prize in Chemistry awarded to Jean-Pierre Sauvage, Fraser Stoddart and Ben Feringa. In the group we are developing switchable molecular tweezers that are systems that can switch between an open and closed conformation by a coordination stimulus. The tweezers are functionalized by metal complexes that can present different properties depending on the cation used. We exploited the large change in distance triggered by the mechanical motion to modulate luminescent or magnetic properties [3,4]. By using three orthogonal stimuli we have recently obtained a remarkable six level switch combining ion-triggered mechanical motion and redox-activity [5].

In this article we were interested in using the mechanical motion of the tweezers to modulate catalytic activity. We introduced Zn(II) moieties to act both as Lewis-acid catalytic site and as binding site in a benchmark acyl transfer reaction between pyridinemethanol derivatives and anhydrides. We expected a large difference of activity between the open conformation with intermolecular reaction and the closed form where an intramolecular reaction can occur. Indeed, a 80-fold increase in activity was observed upon closing with acetylimidazole and ortho-pyridinemethanol substrate demonstrating allosteric up-regulation upon closing. Unexpectedly, with meta and para derivatives a reverse allosteric effect was observed with higher activity for open tweezers than for the closed form. Such puzzling results were rationalized by a substrate inhibition in the closed form as meta and para derivatives can bind both Zn(II) of the cavity in a bridging bidentate mode. Experimental and theoretical calculation both supported this explanation. Thus, our molecular tweezers architecture presents an attractive substrate-dependent allosteric regulation that was not observed in other supramolecular architectures [6].

We believe this proof of concept opens new perspectives in the field as it could definitely be applied to other relevant cooperative catalytic reactions. 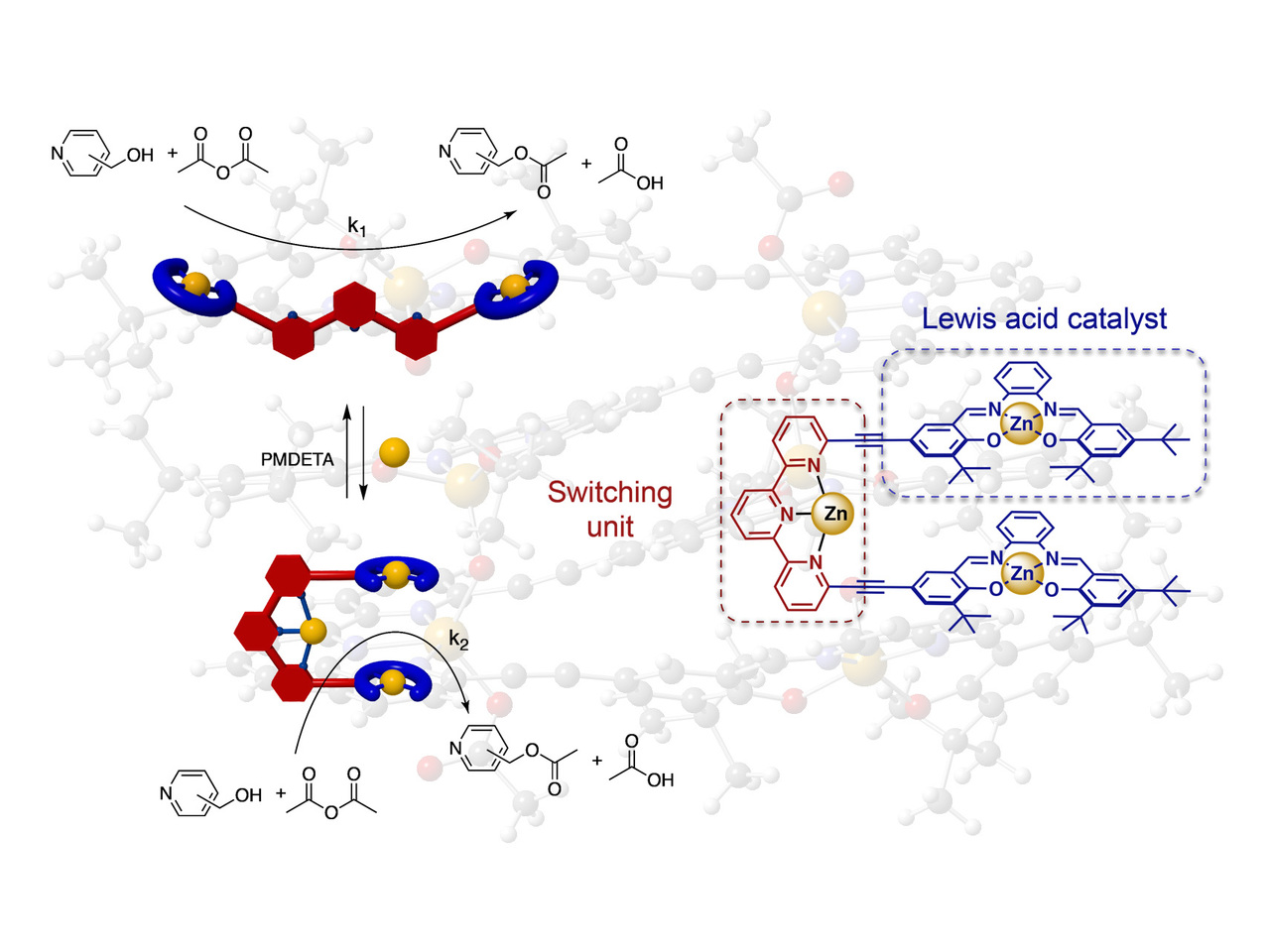