Electrochemical conversion of CO2 into liquid fuels, powered by renewable electricity, offers one means to address the need for the storage of intermittent renewable energy. Now, Sargent and co-workers present a cooperative catalyst design of molecule–metal interfaces to improve the electrosynthesis…

Ethanol is a widely-used liquid fuel and fuel additive. It is particularly desirable because it is energy dense by both volume and mass, and because it takes advantage of the extensive existing infrastructure built for the distribution of fossil fuels. However, the selective production of ethanol from CO2 electroreduction has yet to be achieved: the Faradaic efficiency (FE) toward ethanol on state-of-art catalysts is still below 30%, and the overpotential is well above 1 V at appreciable production rates (current densities above 10 mA cm–2).

We pursued a catalyst design strategy that would break this compromise: we believed that – if we could increase the coverage of the key intermediate, CO, yet not interfere with its binding strength on an already optimized C–C coupling catalyst surface – we could boost the reaction rate of a key step and circumvent the compromise described in the scaling relations.

In our work, we report cooperative electrocatalysts in which we functionalized the metal catalyst with a family of molecular complexes (Figure 1). We took advantage of the superior ability of the molecular catalysts to convert CO2 to CO with near-unity FE.

We found that the resultant high concentration of CO at the molecule:metal interface promotes ethanol production from CO2. We achieved an electrochemical CO2-to-ethanol FE of 41% at a partial current density >100 mA cm–2 and an overpotential <1 V. This is by a factor of 1.4x the highest FE for ethanol reported using an electrocatalyst and operating above 10 mA cm–2.

We further utilized a set of tools, including density functional theory calculations, electrochemistry, in situ Raman and operando X-ray adsorption spectroscopies, to explore mechanisms underpinning the advance. We found that the locally created CO-rich environment at the interface facilitates C–C coupling and further favors the ethanol pathway over the competing ethylene pathway.

The findings presented in this work suggest new avenues to achieve electrocatalysis that bypass the traditional scaling relations. The new heteromaterials do so by tuning the intermediate enrichment at catalyst interfaces. 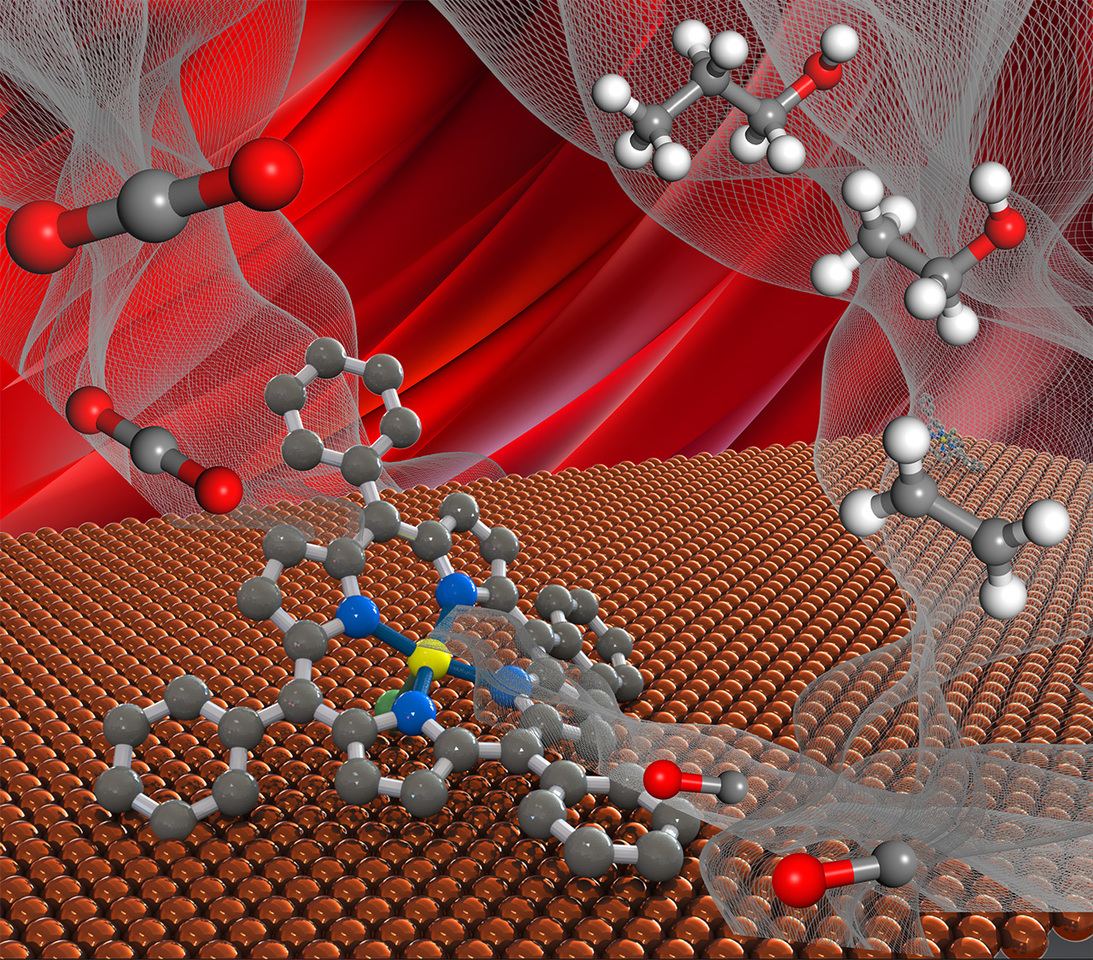