Ethylene glycol is a commodity chemical with an annual consumption of 20 million tonnes. Its production generates 1.6 tonnes of CO2 per tonne of ethylene glycol. To reduce these CO2 emissions, the authors report a one-step electrochemical route to selectively convert ethylene to ethylene glycol at a…

In recent years, our group at the University of Toronto has made considerable progress in developing catalysts for converting CO2 to ethylene. We were therefore motivated to find ways to further convert this ethylene to other commercially valuable products. A major use of ethylene is to produce ethylene glycol, a key ingredient in antifreeze and making PET – an everyday plastic. Ethylene glycol has an annual production volume of 20 million tonnes, making it one of the world’s most important commodity chemicals. Currently, the traditional route to making ethylene glycol is a 2-step thermocatalytic process, involving high temperature and pressures. It would therefore be advantageous to develop an electrochemical process that could convert ethylene to ethylene glycol in a single step under ambient pressure and temperature. Importantly, electrochemical processes can be directly powered by renewable electricity.

We began by experimentally screening a range of common transition metal catalysts such as Cu, Au, Pt and Pd. Eventually, we found serendipitously that a Pd/C catalyst could generate some amount of ethylene glycol, however the selectivity was low (< 20%). We then proceeded to try various Pd based catalysts such as nanoparticle based ones, however the selectivity was comparable, if not lower. We then proceeded to electrodeposit Pd at very high current densities to generate a highly dendritic, defective and porous structure. Such morphologies have seen success in other electrochemical reactions such as CO2 reduction and we had a hunch that this could somehow boost our ethylene glycol selectivity.

True enough, these gave us a much higher ethylene glycol selectivity (60%). To further boost the selectivity, we used in-situ Raman spectroscopy and X-ray absorption spectroscopy to study the catalyst in operation. We found that the surface of Pd actually transforms into an oxide layer and use of D2O allowed us to detect the presence of OH groups on this layer. Based on these findings, we constructed a theoretical model with a proposed pathway to ethylene glycol, involving the successive transfer of two OH groups to ethylene. We identified that the rate limiting step was likely the transfer of OH to the intermediate C2H4OH. We postulated that alloying our Pd catalyst with a different element could enable us to tune the OH binding energy, possibly making this step easier. We continued our theoretical calculations, this time with 10 different candidate dopant elements. Based on this, we found that Au was the best candidate to add as a dopant, which could facilitate this OH transfer step.

We simply added small amounts of Au salt into our Pd electrodeposition solution and fabricated our catalysts in a similar manner. Indeed, with Au alloying (3.2 at. %), we found that the selectivity to ethylene glycol could be increased to about 70%. Using this catalyst, we performed ethylene oxidation for an extended duration of 100 hours. To monitor the catalyst performance, we routinely removed some of the electrolyte for NMR analysis in order to quantify the ethylene glycol production rate. We found that the current density and selectivity remains stable throughout, although the performance did start to drop slightly towards the end.

Our findings show a promising pathway towards the selective generation of ethylene glycol from ethylene, which could be of vital industrial importance in the future. In addition, the catalyst showed an activation period before peak performance was attained and we proposed that this could be due to dynamic surface reconstruction. Further investigations are ongoing towards a more detailed understanding of this phenomena. We hope that our work motivates further studies to develop other electrochemical anodic reactions for commodity chemicals synthesis. 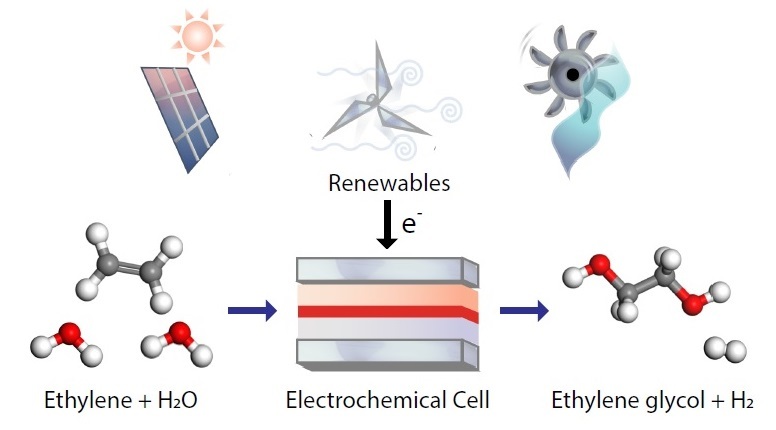