Collision theory predicts the spectral peak of the sodium D-line to have a red-shift dependent on pressure and temperature. Using the serendipitous presence of sodium in octahydro-1,3,5,7-tetranitro-1,3,5,7-tetrazocine (HMX), the authors calibrate the D-line shift up to 1.5 GPa during deflagration.

Deflagration is a violent reaction often associated with energetic materials (such as HMX) - it can be thought of as a regime found between burning the material in open flame, and full on detonation. My PhD, funded by Emmanuel College and the Avik Chakravarty Memorial Fund, is focused on investigating the optical emission of these reactions.

Earlier research from my group, and my supervisor, Dr David Williamson, found evidence of spectral features in a deflagration reaction. To identify this peak, we first burnt HMX in flame and quickly identified the main contribution was from sodium, which was somewhat unexpected, as sodium is not found in HMX, and would only be present as a minor impurity. However, sodium is seen in the majority of combustion spectra [2], no matter what was burning, due to how emissive it is. This makes sense when considering what colour a 'normal' flame is: the characteristic yellow-orange of sodium (as seen in the banner image).

More interestingly, when observing this spectral peak in the more violent (higher pressure) deflagration, the centre had red-shifted away from its ambient pressure value. Looking for an explanation, we found other experiments which featured a red-shift, which in turn described theories of collisional peak shift, such as the Lindholm-Foley description [3]. The basis of this theory was that an increase in pressure (perturber gas density) would lead to a larger red-shift in the spectral peak, though this had never been measured to deflagration pressures (of order 1 GPa) before.

In order to investigate, deflagration light and reaction pressure was measured from HMX initiated in both in the well-known fallhammer apparatus (Fig. 2a), and, for the first time, in a Hopkinson bar (Fig. 2b). Comparing two different initiation methods not only increased the range of studied pressures (and therefore shifts) but also provides evidence that the method of initiation can lead to differences in reaction properties, such as the measured temperature being 1000 K different.

Overall, the red-shift measurements from these experiments had a dependence on pressure and temperature as was theoretically predicted, indicating that the Lindholm-Foley collisional theory was sufficient to describe such a process. More importantly, in my mind, the link between peak shift and pressure allows a new method of pressure measurement - one that is fast, non-intrusive and relatively simple, and the calibration provided in the paper can hopefully be applied to a range of experiments in the future. 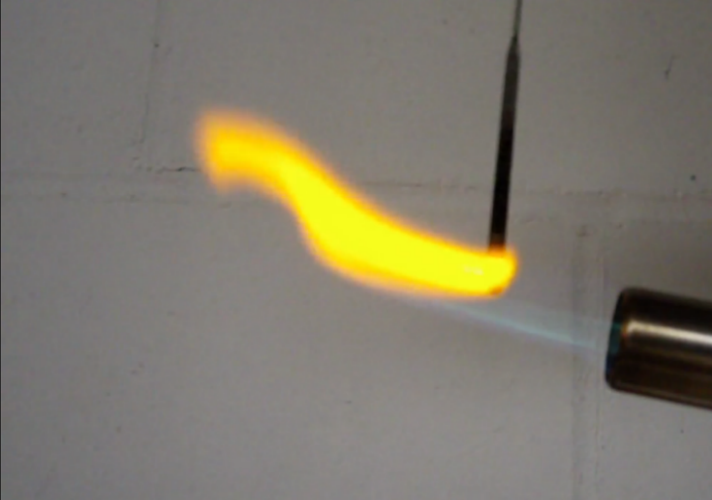