Many reagents have been developed for cysteine-specific protein modification. However, few of them allow for multi-functionalization of a single Cys residue and disulfide bridging bioconjugation. Here the authors report 3-bromo-5-methylene pyrrolones as a simple, robust and versatile class of reagen…

We introduce the idea during the mechanistic studies of C4-AP—an oxidative DNA damage—mediated DNA strand break in nucleosomes. We revealed that histones catalyze the DNA strand cleavage at C4AP, and the sugar moiety of C4-AP is simultaneously transferred to histones, resulting in a 5-methylene pyrrolone (5MP) modification on the sidechain of lysine [1].

We have demonstrated that 5MPs, just like their analogues maleimides [2], can be used for cysteine-specific protein modification via Micheal addition. Strikingly, 5MPs show markedly improved cysteine specificity relative to maleimides [3]. However, Cys-5MP conjugates are unstable and prone to loss of 5MP modifications, which diminishes their applications in some cases, such as the preparation of antibody-drug conjugates.

In this context, we intended to develop more potent cysteine-specific protein modification reagents that remain merits of 5MPs, but can produce stable bioconjugates for therapeutic applications. To this end, we synthesized a series of 5MP derivatives by introducing different functional groups to the five-membered ring moiety of 5MP, among which 3-Bromo-5-methylene pyrrolones (3Br-5MPs) were identified to be a class of cysteine-specific protein modification reagents with striking properties.

3Br-5MPs show higher cysteine specificity than maleimides and higher reactivity than 5MPs. Coupling Cys with 3Br-5MPs generates stable conjugates that, however, are amenable to secondary addition by another thiol or cysteine to produce complicated products. We thus carried out model reactions to explore the reaction mechanism between 3Br-5MP and the sulfhydryl group.

Through capturing and characterizing intermediates and final products by 2D NMR and X-ray diffraction analysis, we revealed that the reaction is a tandem process (Figure 1). The primary Michael addition of one EtSH to 3Br-5MP is followed by spontaneous hydrolysis and elimination of the C3-Br, producing 2 as the sole product. Compound 2 is stable, but it reacts with large excess EtSH to slowly generate dual-modified product 4, presumably via the ring-open intermediate 3. Furthermore, 2 and 4 can be transformed to stable and chemically inactive mono-adduct 5 and dual-adduct 6, respectively, by treating with NaBH4 in neutral solution.

The mechanism uncovered above highlights that 3Br-5MPs are invaluable for multi-functionalization of a single cysteine and disulfide bridging bioconjugation. As a proof-of-principle experiment, we treated a single-cysteine containing protein with N-fluorescein-3Br-5MP and then with biotin-SH, and as expected, fluorescein and biotin dual-labeled protein was obtained (Figure 2a).

It is well known that disulfide bonds are more common than free cysteine in protein especially in antibodies. We began to ask ourselves whether 3Br-5MPs can be used for rebridging bioconjugation of reduced disulfide in antibodies. This hypothesis was soon confirmed by the reaction of reduced IgG Fab fragment with N-fluorescein-3Br-5MP (Figure 2b). A homogenous disulfide bridging bioconjugate with DOL (degree of labeling) of 1 was obtained and it exhibited full binding activity to its antigen.

Disulfide bridging bioconjugation of multiple disulfide bonds in intact antibodies will be more challenging. Research on preparation of homogenous antibody-drug conjugates with an ideal drug-to-antibody ration via disulfide bridging bioconjugation using 3Br-5MP and elucidation of their pharmacokinetic and pharmacodynamic properties is ongoing in Zhou’s lab. 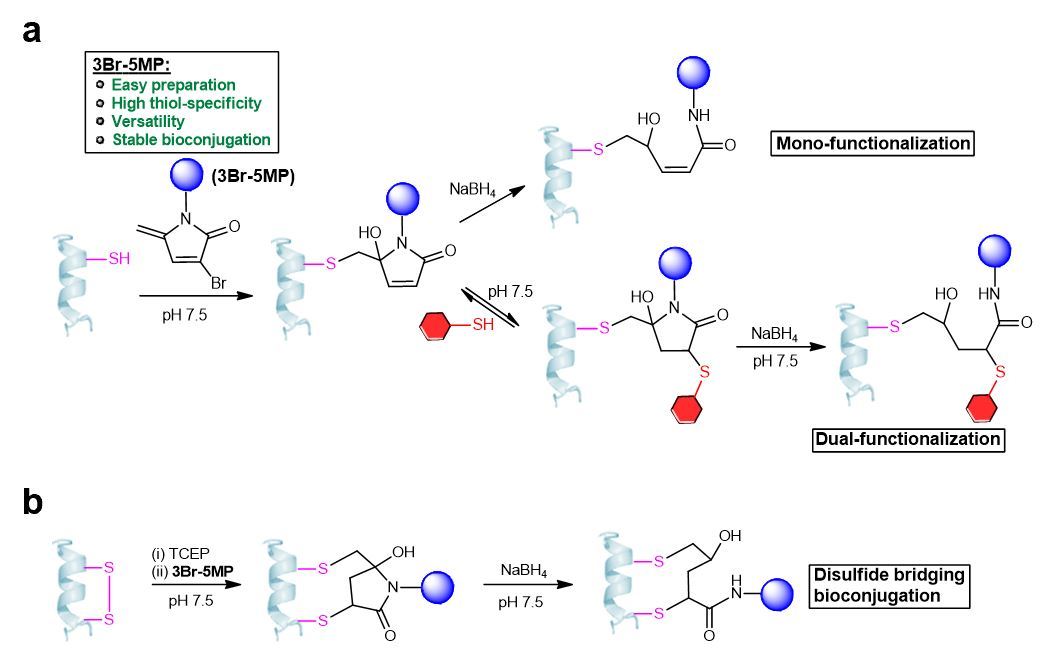 A newly discovered simple, robust and versatile reagent (3Br-5MP) for protein multi-functionalization of a single cysteine and disulfide bridging bioconjugation.