During my postdoc studies in the laboratory of Bradley Moore (University of California, San Diego), I was investigating the flavoenzyme EncM that was seemingly responsible for a rather crazy oxidative rearrangement in the biosynthesis of the polyketide antibiotic enterocin. Knowing that EncM functions as a monooxygenase (i.e. it transfers an oxygen atom derived from O2 to the polyketide substrate), Brad and I set out to prove the involvement of a flavin-C4a-peroxide (FlC4aOO) (Figure 1), which was the accepted universal oxygen-transferring species of flavin monooxygenases at that time. Together with the flavoenzyme specialists Bruce Palfey and Frederick Stull (University of Michigan), however, we failed at producing any evidence for this species. Instead, many results seemed impossible to consolidate with classical flavin biochemistry, so eventually we had to think outside the box.

At some point, the realization came that an N5-oxygen adduct may be involved instead, which better fitted our data. When the Michigan folks pulled out an old stock of chemically synthesized flavin-N5-oxide (FlN5O) (Figure 1) from their freezer, we were excited to see virtually identical spectral features to our EncM-bound flavin. Yet, the surprising discovery of the FlN5O as oxygen-transferring species not only started a new chapter in flavin enzymology but also left us somewhat baffled. Are there other enzymes out there that utilize N5-oxygen adducts? Why is there need for this species when flavoenzymes already have a powerful oxidant at hand?

As EncM is an unusual enzyme in many ways and does not have a typical flavin monooxygenase structure, the question remained unsolved whether flavin-N5-oxygen adducts can be found among classical flavin monooxygenases. Further remarkable insights came from the group of Tadhg Begley (Texas A&M University), who amazingly showed that FlN5O is generated in the course of unusual redox-neutral oxygenations catalyzed by enzymes with canonical flavin-dependent monooxygenase fold, such as RutA from Escherichia coli.

But what did that discovery signify, as the flavin-N5-oxide was clearly not used as catalytic species but was rather formed as by-product? As head of my own research group, we now show evidence that these flavin monooxygenases most likely employ a flavin-N5-peroxide (FlN5OO) species for nucleophilic attack on carbon-hetero bonds, which enables a redox-neutral oxygenation that generates FlN5O and may best be described as a “pseudo-hydrolysis” (Figure 1). Using RutA as a model system, which cleaves a C–N bond in uracil, my students Arne Matthews, Raspudin Saleem-Batcha and I now demonstrate with our collaborators Kendall Houk, Jacob Sanders (both University of California, Los Angeles) and Frederick Stull (now Western Michigan University) that RutA and EncM share strikingly similar features despite not being structurally related. Most importantly, a highly similar O2 reaction site next to N5 of the flavin can be found that promotes the formation of N5-oxygen adducts.

Figure 1. Different oxygen-transferring agents in flavin monooxygenases and reactions. The newly discovered FlN5OO is shown to the right, which is converted to the FlN5O via redox-neutral oxygen transfer to the substrate

These results show that N5-oxygen adducts are more widely employed as oxygen-transferring agents and have been overlooked so far. Both the FlN5O and FlN5OO are clearly very different in reactivity compared to the classical FlC4aOO and we anticipate the discovery of additional enzymes that will allow us to gain a better understanding of the chemical properties and abundance of these novel flavoenzyme tools. Exciting times for flavin enthusiasts! 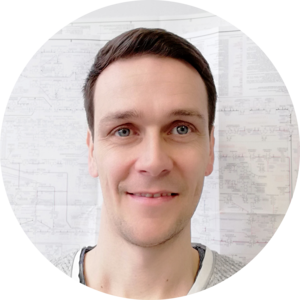