We apply the concept of growth-a universal feature of living organisms-to design synthetic materials. The idea was demonstrated by elastomers which can localize self-growth of microstructures on its surface under light. The grown structures can be finely modulated in size, composition, and strength.

Living organisms differ from synthetic stuff in their forming mode: they grow but synthetic stuff is made. Growth is an extremely complicated process involving incalculable reactions and cannot be mimicked by any artificial method. However, by a simple consideration, growth could be a simple thing consisting of several processes including eating food, absorbing nutrients in the food, transporting the nutrient, converting or/and integrating the nutrient as part of the body. These processes are precisely directed by various intrinsic codes stored in the gene but also response to environmental stimuli. A lot of daily challenges are met via growth, such as becoming strong, adapting shape to varying physical environment, healing damage made in accidents. In addition, various fascinating structures are also created via this mode. Growth is an essential capability for living organisms. In the eye of a material scientist, such capability also implies a fundamentally new way to smarten synthetic materials. We challenged ourselves to mimic this capability in polymer materials. To this end, we need to build a set of “growing” mechanisms into a single polymer system, including absorbing molecules (nutrient for a polymer material), molecular transport and incorporation, integrating the incorporated mass.

When designing our growing materials, we figured that the absorption of molecules into a polymer material could be easily achieved via swelling. Incorporating these molecules into the material can also be designed by applying polymerization. However, how to efficiently control mass transport in a crosslinked polymer is a difficult and complicated task. We could not control the growth position of a polymer material until found that the formation of dissociable ionic groups could enhance the swelling ability by expansion of the polymer networks via electrostatic repulsion within the gel matrix. Such phenomenon inspired us to apply the dissociable ionic group to on-demand regulate molecular transportation. Thus by introducing o-nitrobenzyl ester (NBA) in the poly(4-hydroxylbutyl acrylate) (HBA) elastomer system, we develop a photoregulated strategy to control localized growth of microstructures from the surface of swollen substrates (Figure 1). In our design, three kinds of reactions, namely, photolysis, photopolymerization, and transesterification, were coupled together to guide the transport of liquid components (nutrient solution) entrapped in the substrates, to convert the polymerizable components in the liquids into polymers, and to reconfigure newly formed and original polymers. As a result of these reactions, microstructures can grow directly from flat substrates without the requirement for any preprogramming.

Figure 1. Schematic of light-induced growth from swollen substrates. (a) Growable seed made from 4-hydroxybutyl acrylate (HBA), o-nitrobenzyl acrylate (NBA, promoter), Irgacure 819 (I-819, photoinitiator) and 1,6-hexanediol diacrylate (HDDA). (b) Swollen seed. The mixture of HBA, HDDA, photoinitiator (I-819), and transesterification catalyst (benzensulfonic acid (BZSA)) was used as the nutrient solution for swelling. (c) Swollen substrate under selective UV irradiation. Photolysis of NBA units generated dissociable ionic groups to induce liquid diffusion into the irradiated region. (d) New polymer network formed via photopolymerization. Liquid components diffused in, and the polymer chains in the original network were stretched. (e) The grown part was homogenized via transesterification reactions between the original and newly formed polymer networks.

Our hypothetical mechanism has been proved by the experimental approaches. We swelled an NBA-containing HBA elastomer with a mixture of HBA and crosslinker HDDA and used a UV light to trigger the reactions of NBA photolysis, polymerization of HBA and HDDA, and transesterification of original networks and new-formed networks. As a result of the occurrence of these reactions together, various structures grow out from the surfaces of the swollen elastomers (Figure 2). By changing different parameters, grown structures with modulated size, composition and mechanical property have been achieved. The flexible tunability enables the creation of microstructures on surfaces and the restoration of large-scale surface damage. Although the methodology developed in this study was demonstrated on structured surfaces, the mechanistic insights gained regarding governing growth can be readily applied to change the bulk properties of materials in consideration of the capability of light to spatially trigger various reactions. We thus envision that its development will benefit areas such as self-healing materials and rough surfaces.

Figure 2. Time-dependent images (side view) of swollen HBA-based substrates under UV irradiation (10 mW·cm-2). A photomask with a diameter of 500 µm was used. Scale bar is 250 µm.

If you're interested in more details, please read our paper as follows:

Written by Lulu Xue and edited by Jiaxi Cui. 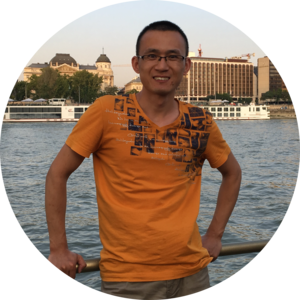