Switching between silent and alive where shining in light

Azobenzene is the most common photo-switch molecule. Particularly, seven-membered cyclic-azobenzene could convert photo-energy into ring-strain energy by itself. When the ring-strain helps its cycloaddition toward nitrile imine dipole, a new type of "photo-click" reaction is on the way.

"Photo-click" chemistry as named is derived from "click" chemistry which refers to a type of biocompatible reactions characterized by joining of a pair of "spring-loaded" reactants spontaneously and rapidly with excellent specificity. "Photo-click" reactions also inherit the characteristic that a photochemical reaction could be controlled by light. Because it allows the "spring-loaded" intermediate to be formed under strict control of photo-stimuli, there is a great space to explore "photo-click" reactions in modification and tracking of biomolecules in subcellular environment.

To realize a goal of studying the difference or interaction of a particular cell among others, the laser scanning or patterned illumination would be a nice choice as the physical stimuli. Sounds interesting? Photo-uncaging of protected biomolecules has accomplished this purpose via releasing the active site of macromolecules. But what if we want to tether a new functionality on macromolecules whenever or wherever it is necessary? We believe this is the scenario that "photo-click" reaction could distinguish itself in a perspective of chemical ligation.

An ideal “photo-click” reaction requires harmonic coordination of many prerequisites including but not limited to stringent requirements of bioorthogonality, photo-toxicity, size of reactants and photo-stability of products. Therefore, it is quite demanding to exploit a photo-chemical reaction as the “photo-clickable” tool, especially in case of live cell environment where complex machinery of biochemical process is on an active and ongoing basis. Imagine that even if the rate of bimolecular conjugation step is faster than 1×106 M-1s-1, the concentration of reactant could be too dilute, resulted in the diffusion of target biomolecule as the rate-determined factor. Therefore, the photo-induced intermediate must have sufficient lifetime to wait for the target reactant to complete the bioconjugation.

Photo-switch molecules are the fundamental components that could directly harvest photo-energy to drive the operations of molecular-level machinery. How could we take advantage of the merits of these molecules in “photo-click” reactions?

Our first attempt to develop “photo-click” reagent was focused on mesoionic aromatics as dipole source, but the dipolarophile was limited to strained alkene that is widely used in bioorthogonal chemistry. Since 2018, our research team has been trying to fuse photo-switch molecule into the chemical reporter of “photo-click” reaction. Could we find a dipolarophile which would be converted into the “spring-loaded” state in-situ via photo-energy transfer from embedded photo-switch, and eventually promote the desired reaction? We went through a lot of struggles, until gradually realized that ring-strained azobenzene might be a better dipolarophile in term of cycloaddition with nitrile imine dipole. Because this was rarely discovered, we were not convinced until my student obtained the single crystal diffraction data of the adduct, known as Macrocyclic Azimine Imine which surprisingly is also a dipole itself. It is fascinating to see the acceleration of the “photo-click” reaction as DBTD lit up.

For detailed results about the “photo-click” reaction,check our article here. We'd like to hear your opinion. 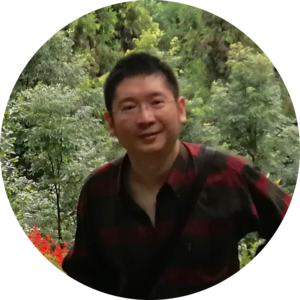