Are macroscopic and microscopic properties always consistent with each in a small-charge world?

The interface friction on solid surfaces is generally regarded as consistent with the wetting behaviour. Here the authors use molecular dynamics simulations and experiments to show that a small surface charge difference causes a change in the solid/water friction coefficient of over an order of magn…

The findings reported in our paper [https://doi.org/10.1038/s42004-020-0271-8] unexpectedly find, even over an order of magnitude difference of the friction coefficient at the small charge difference (≤0.36 e) on the two-dimensional material and biological lipid surfaces, despite of the similar contact angle values on these surfaces as traditionally thought. This large difference is confirmed by experimentally measuring surface friction of graphite and MoS2 using atomic force microscopy (AFM). The large variation of friction coefficient is attributed to the significant fluctuations of localized potential energy profile in presence of the inhomogeneous charge distributions. These results help clarifying the intrinsic physics relating macro wetting behaviors and micro frictions of various surfaces, including biological surfaces.

Figure 1. Friction coefficient for hexagonal solid surface, the highly oriented pyrolytic graphite (HOPG) and MoS2 solid surfaces. (a) Model hexagonal solid surface with small charge ranging from 0 e to 0.36 e. The red and blue spheres represent positive and negative charges, respectively, and the gray spheres represent neutral atoms. (b) Estimated relative friction coefficient λq/λ0 (q ≤ 0.36 e) of liquid water on the solid surface calculated with the Green-Kubo relationship (black solid columns), and relative friction (red textured columns) calculated from the contact angle using the theory proposed by Huang et al. (ref. 1), together with the contact angles in respect of the charge q values from 0.00 e to 0.36 e. When q increases from 0.00 e to 0.36 e, the Green-Kubo relative friction coefficient changes by a factor of 41 while the coefficient calculated from the contact angle changes by 50%. This panel also shows the typical materials with the atomic charge range from 0.00 e to 0.36 e, including graphene, hydrogen-terminated graphene, N-doped graphene, and MoS2. (c) Schematic for the measuring friction with an AFM tip. The arrow shows the moving direction of the AFM tip, which is perpendicular to the cantilever. A water droplet condenses from the humid environment between the hydrophilic AFM tip and the HOPG or MoS2. (d) Lateral deflection signal of the AFM cantilever when rubbing on HOPG or MoS2, respectively, varying with the relative environmental humidity. The friction force is proportional to the lateral deflection signal. Scale bars represent the standard deviation of the friction forces with the “discrete frequency” larger than 200.

Interestingly, we note that the most of popular two-dimensional materials and biomolecules (67.1% in all the residues atoms listed in OPLSAA force field) are formed by the atoms or groups with the small charges (≤ 0.36 e). For example, the carbon atoms in N-doped(6, 7) and the hydrogen terminated graphene(8) usually attain the charge from 0.10 e to 0.20 e, the carbon atoms of the terminal methyl of a lipid usually attain the charge of -0.18 e,(9-11) the carbon atoms of benzene rings in Phe group of protein residues can attain a charge of -0.115 e,(12, 13) and the S atoms of MoS2 have a charge of -0.36 e.(14). While, these small charges atoms/groups on the material and biomolecular surfaces are usually neglected in understanding the surface dynamics properties. This may be attributed to the negligible electrostatic interaction energy contribution of the total surface/water interactions due to the small charges.

For the materials with small charge, our results herein reveal that this general knowledge of wetting behaviors are not directly applied to infer the dynamics behaviors in respect of the frictions, even the wetting behavior, on the surfaces of the most popular two-dimensional materials(15) and biomolecules. Our findings not only open a door to design frictionless nano-devices, but also represent a big step towards understanding the microscopic nature of the small-charge world, such as the dynamics binding processes in protein-ligand in the crowded cell environments, molecular through the lipid membranes and the protein folding rates related to the internal frictions.

8.         Anithaa VS & Vijayakumar S (2018) Effect of side chain edge functionalization in pristine and defected graphene-DFT study. Computational and Theoretical Chemistry 1135:34-47. 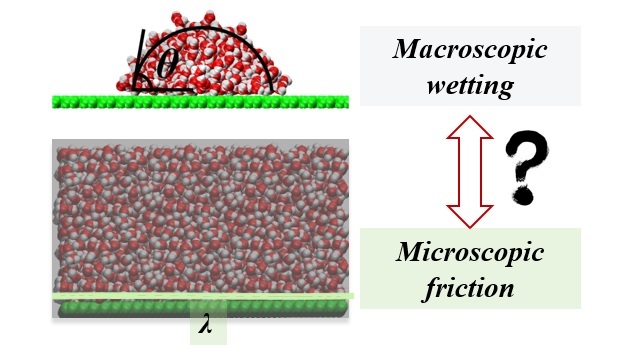 Are macroscopic and microscopic properties always consistent with each in a small-charge world?