Covalent organic frameworks (COFs) are a class of ordered network polymers with crystallinity. The properties of COFs are a direct reflection of the nature of their bonds and structures. To design crystalline network structures, typically, reversible reticular chemistry is employed.
Javeed Mahmood
Research Assistant Professor, Ulsan National Institute of Science and Technology
Follow
Like Liked by Eva Amsen and 1 other
2

Two-dimensional covalent organic frameworks (2D COFs) are commonly synthesised through dynamic covalent chemistry, as it allows for thermodynamic ‘error correction’ which enhances crystallinity. Here a crystalline 2D COF with amine and hydroxyl functional groups within the pores is synthesised throu…

However, this reversibility leads to physicochemical instability, making the materials inappropriate for many practical applications. Stable COFs require irreversible bonds and forming them is highly challenging. Fabricating COFs with irreversible bonds is highly desirable, but it primarily relies on strong thermodynamic energy gain (kinetic control). This leads to disordered structures. Although a few COFs have been synthesized with irreversible aromatic pyrazine linkages, none of them have available functional groups which would permit further modification.

We demonstrated a crystalline two-dimensional COF with amine and hydroxyl functional groups within the pores through kinetically-controlled reactions. To kinetically control the reaction the second monomer was added at low temperature (melting point: -40 °C) in trifluoromethanesulfonic acid to control the very fast reaction between the diketone and diamine to construct pyrazine linked COF.

But the major concern was the broad ugly X-ray diffraction (XRD) pattern was never convincing to appease the reviewers. The broad XRD peaks are very common in the irreversible reaction driven organic framework synthesis, which the COF community usually considers ‘amorphous’. However, our theory was that in solution due to extremely fast growth in molecular weight because of large energy gain (aromatization), it is difficult to be stacked in a crystalline manner (randomly stacked layers) due to difficulty in the movement (kinetic) of the large flakes. Mostly, it is believed that the broad XRD pattern could be related to poor crystallinity and small crystal size. The most important thing in the experimental data is (100) peak, which indicates the crystallinity and formation of the COF, but the peaks are broad because of various reasons, including small crystal size, polycrystallinity, poor and mismatched staking of the layers etc.

To validate our assumption, we requested Prof. Shin to solve the structure of COF by scanning tunneling microscopy (STM). After hard work of six months, he came up with a nice STM image of the material. The single layer was evaporated thermally at 600 K on cleaned Cu(111) substrate under ultra-high vacuum (UHV) condition. As it is well-known that macromolecular materials, which are synthesized by solution polymerization, have a wide range of molecular weight distributions from small to very large sizes. It is almost impossible to synthesize macromolecular materials with the same molecular size and uniform molecular weight distribution. Thus, under ultrahigh vacuum condition, it is possible to sublimate relatively smaller sized flakes onto the clean Cu(111) substrate.

We got a nice structure, but Prof. Shin faced a nightmare experience with STM after this measurement. During the thermal evaporation under UHV, the fragments of the material rigorously sublimes inside the STM chamber. To be frank, the sample preparation chamber was badly contaminated with those COF fragments even after long time. Even, the rigorous baking procedure can not completely remove them, the sample heating stage remained contaminated for long time. The small fragments of COF keep evaporating from somewhere in the chamber during baking process for cleaning the surface. Consequently, obtaining clean surface despite tens of cycles of sputtering and annealing, because of the contaminated sample stage with COF fragments during annealing. Therefore, even after the baking of the chamber for cleaning, sample stage become dirty again and requires about 2~4 weeks to obtain clean surface. Though STM is good option to solve the structure but at the cost of significant STM contamination. Even replacing the annealing chamber could not solve this problem, because not only the chamber but also every component was contaminated.

The presence of (-NH2 and -OH) functional groups is important for selective functionalization of the material for further applications. Like attaching long alkyl chain for better solubility in different organic solvents and to modulate the electronic properties of the material.

Xikui Liu
over 2 years ago

I read this interesting article several days ago, and now I know more story behind it, especially about the nice structure at the cost of a nightmare experience with STM. Fused aromatic covalent organic framework, with its excellent stability and potential conductivity, should have a very bright future. Thanks for sharing!

Javeed Mahmood
over 2 years ago

Yes, Prof. Liu, the STM guys are now going to help us only in case of Science or Nature paper. Otherwise they say the cost is too much. 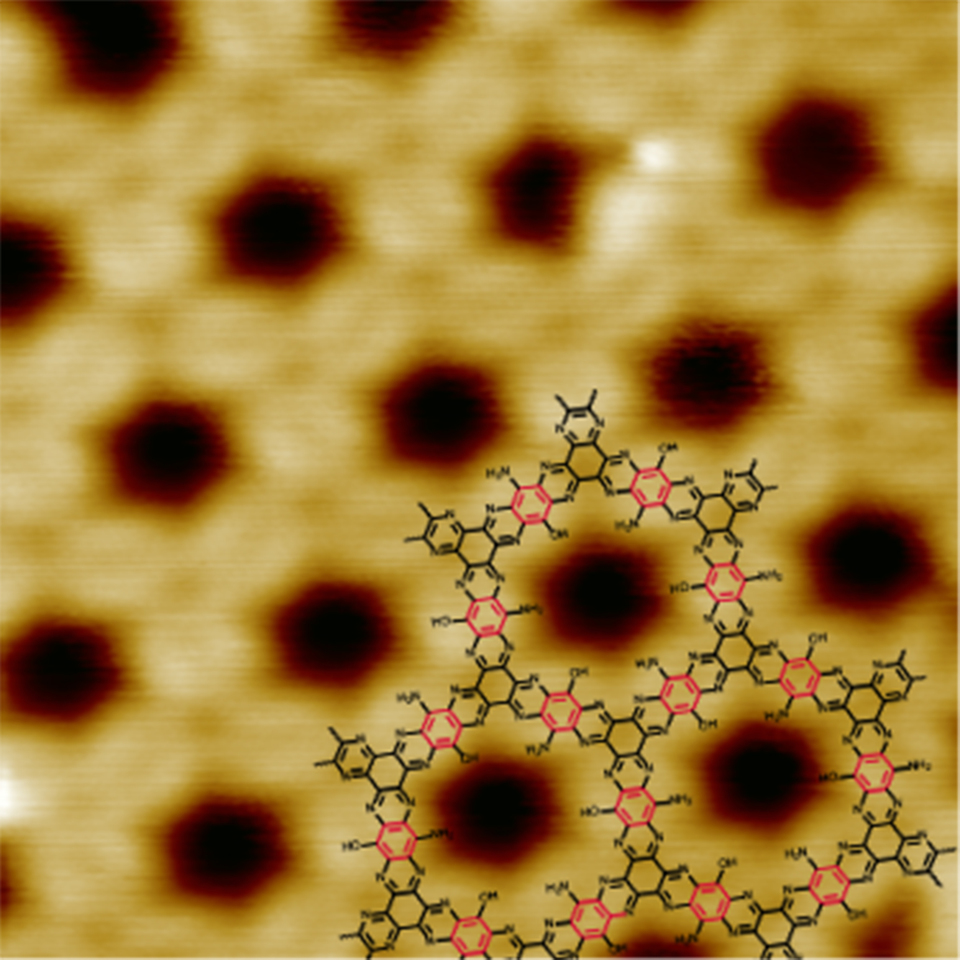 Covalent organic frameworks (COFs) are a class of ordered network polymers with crystallinity. The properties of COFs are a direct reflection of the nature of their bonds and structures. To design crystalline network structures, typically, reversible reticular chemistry is employed.