Polymers are electrically insulating and therefore characterization with electrical or electrochemical methods is not possible. Recently, we demonstrated electrical monitoring of the photoisomerization transition in a benzylidene oxazolone block co-polymer intercalated into graphene sheets.

Block copolymers with controlled properties have been extensively studied in recent decades. A typical example includes stimuli-responsive block copolymers which are sensitive to environmental factors such as light, temperature, and pH. It is possible to incorporate specific stimuli-responsive groups into polymers using controlled polymerization techniques such as living free-radical polymerization. On the other hand, the use of polymers has been restricted in electronic, electrical, and electrochemical applications because most of them are electrically insulating. Graphene has also had difficulties in large-area or large-scale production, which has been a chief obstacle to its extensive application.

Our group has studied the fabrication of functional polymer/carbon nanohybrids and their applications [see our recent reviews, 1 & 2]. In this article (Nat. Commun. 2020, 11, 1324), we report

1) the physical intercalation of a photoresponsive but electrically insulating block copolymer into graphene sheets enabled electrical monitoring of the conformational change of the block copolymer at the molecular level;
2) the current change at the microampere level was sensitive to visible/ultraviolet light, which was also proportional to the degree-of-polymerization of the photoresponsive block (this indicates that the block copolymer/graphene nanohybrid can be used for UV sensors); and
3) discrete signals at the nanoampere level were separated from the first derivative of the time-dependent current using the fast Fourier transform, originating from Coulomb blockade oscillation.

The block copolymer is a biphasic resistor; when it is embedded in conductive graphene sheets, only tunneling would be allowed between geometrically separated graphene sheets. Note that Coulomb blockade phenomena have been investigated mainly for small-area tunnel junctions in sophisticated microelectrode configurations. It is highly straightforward to make the physical intercalation of the block copolymer into graphene sheets. Therefore, our approach demonstrates strong potential for using well-designed block copolymers in various next-generation electronic/electrical devices.

Lastly, I'd like to thank all the coauthors, especially Semin, Hai, and Yunseok, who enjoyed working together on this research project.

A Detective Story Behind Photocatalysis 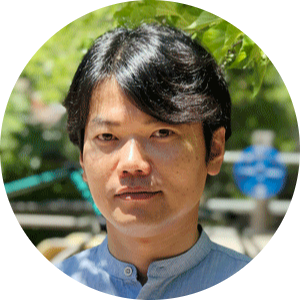